Tesla has released its second ‘Impact Report’ and in this new version, the automaker has significantly expanded the range of the report to include some fascinating data, including deep dives into efficiency, lifetime footprint, and more.

The automaker released the first edition of its impact report last year with the goal of “measuring the impact their products and operations have on the environment and our communities.”

For its 2019 report, Tesla greatly expanded it with a lot more data and interesting information about its operations and the lifetime footprint of its products.

They wrote in the new report:

“The very purpose of Tesla’s existence is to accelerate the world’s transition to sustainable energy. In furtherance of this mission, we are excited to publish our second annual Impact Report. Transparency and disclosure are important to our customers, employees, and shareholders, which is why we have expanded the Impact Report’s content this year.”

Tesla continues in the introduction of the report:

“While many environmental reports focus on emission generated by the manufacturing phase of products and future goals for energy consumptions, we highlight the totality of the environmental impact of our products today. After all, the vast majority of emissions generated by vehicles today occur in the product-use phase – that is, when consumers are driving their vehicles. We believe that providing information on both sides of the manufacturing and consumer-use equation provides a clearer picture of the environmental impact of Tesla products, and we have done so this year largely through a lifecycle analysis detailed in this report.”

The automaker released a comprehensive comparison of the full emissions during manufacturing and the lifecycle of the car with different sources of energy for the vehicle: 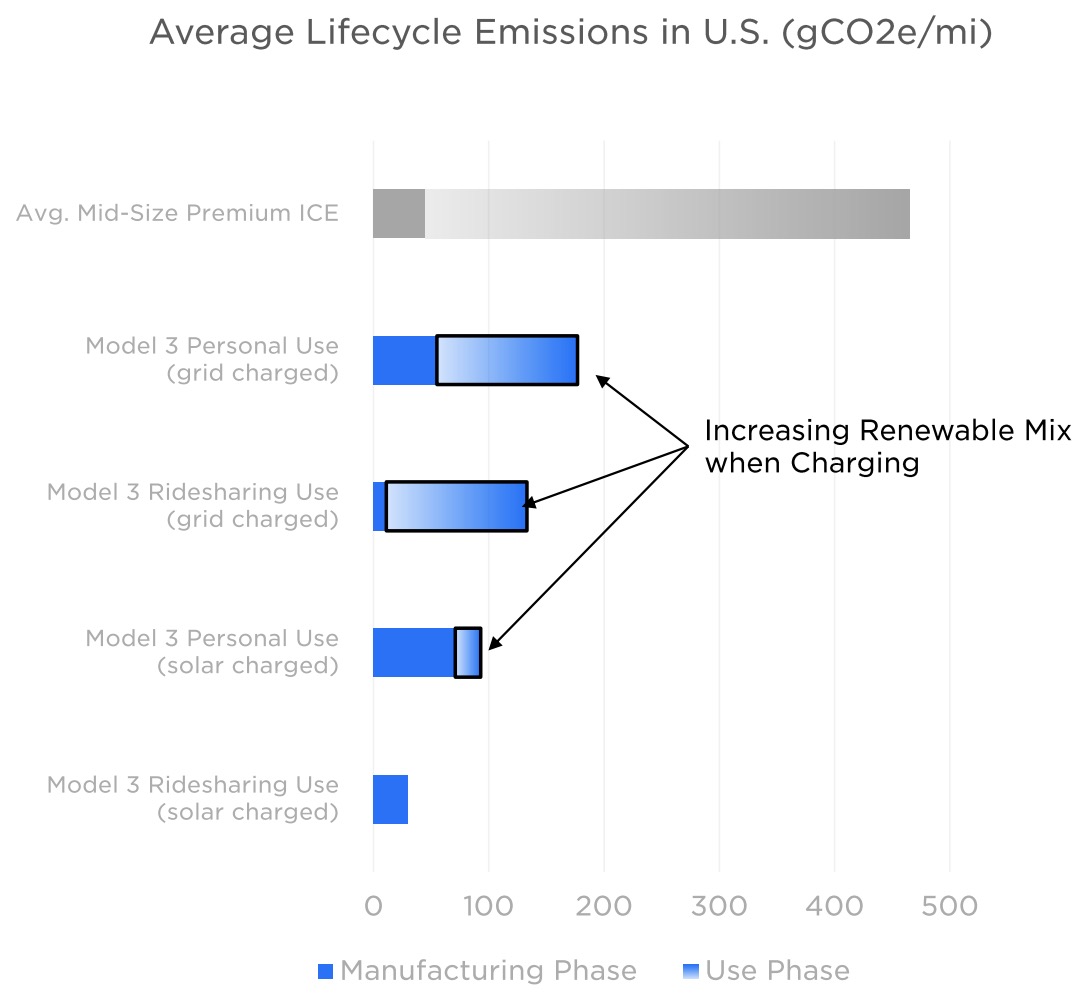 Tesla also shows how the usage of a car and its longevity has a major impact on lifecycle emissions.

For example, if you use a long-lasting car for ridesharing, it would significantly reduce emissions per mile:

There’s a lot to unload from that report and it’s going to take a while to go through it.

I’ll update later with more information, but I’d love to know what you guys find especially interesting in the report.

Let us know in the comments below.

I especially appreciate that Tesla addresses both emissions through manufacturing and at the tailpipe, or lack thereof.

Tesla appears to admit that its vehicles generate more emissions in its manufacturing phase than the average mid-size vehicle, but it compensates several times over during the use phase regardless of if it’s charged with the grid or solar power.