The UHVO is a dual-suspension electric mountain bike that costs just $1,199 shipped. It’s common in the industry for a dual-suspension model to be priced an additional $700 to $1,200 over the hardtail version with the same equipment. It’s kind of hard for me to fathom that this bike company EUNORAU, is able to profit from selling and shipping this bike after all the costs are considered. Someday I might find out, but for now, this is the lowest price I’ve seen for a full-sized, full-suspension e-bike.

Yes, there are tiny folding bikes with dual-suspension, or sometimes small scooters that have a bit of rear suspension, but that’s kind of clogging the term a bit. With the UHVO, the suspension isn’t an afterthought or tacked on just to get another keyword stuffed in there. For the price, this suspension is really really good.

The bike isn’t perfect, and we’ll get into those details very soon. At Electrek, we’re no stranger to cheap bikes of various kinds. Bikes so cheap they stretch the term ‘bike’, in some ways. Whether it’s through Amazon distribution, or brick and mortar stores, all cheap bikes have something they are giving up for that enticing price.

The UVHO is pretty straight forward in what you’re getting, or not getting. 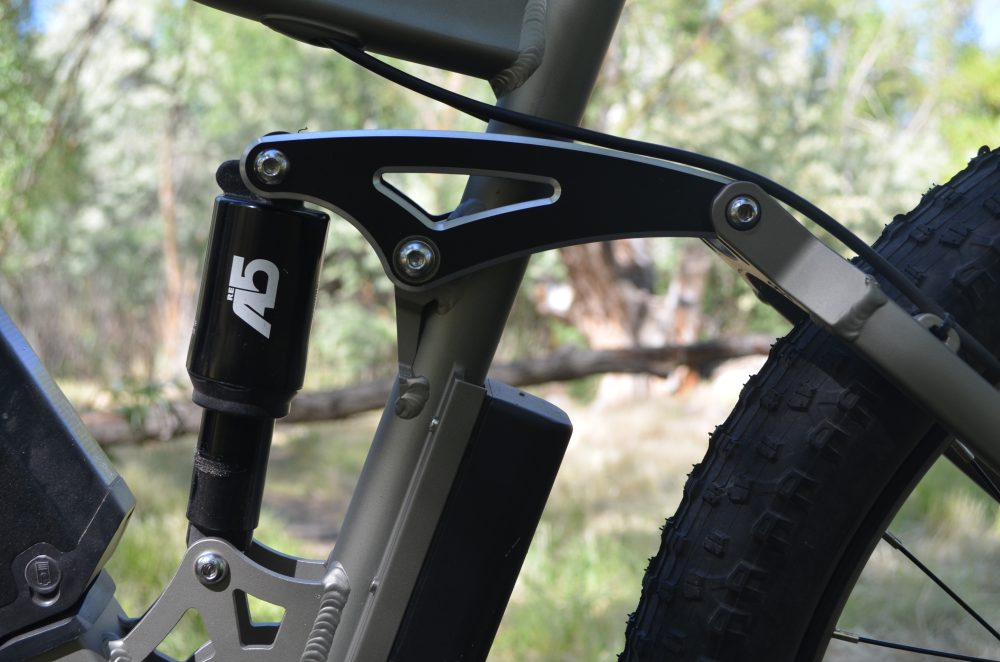 Look on the bright side

The bike is equipped with a front air shock with preload adjust, and a rear air shock that both provide great control. The bike also sports some chubby 27.5″ x 3″ tires, which add a bit of cushion too. The hydraulic disc brakes provide great stopping power, making tight turns and maneuverability more realistic. For this kind of money, it’s a great entry-level electric mountain bike. 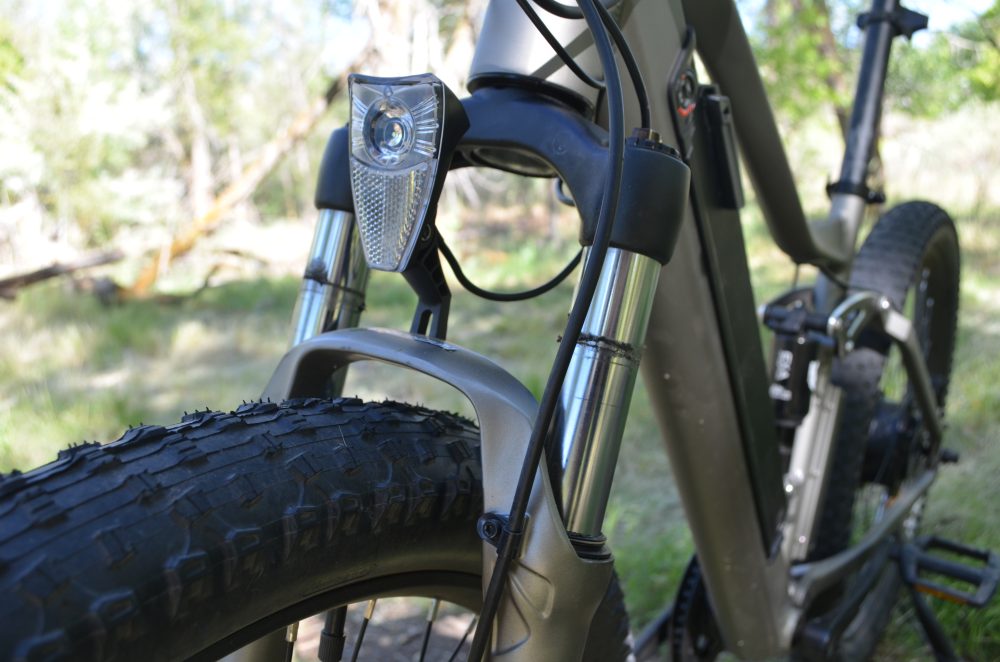 The riding position is perfectly comfortable, and the somewhat-heavy aluminum frame is exactly what you’d expect. The suspension design isn’t going to win any awards, but it works. The wide handlebars actually provide some good control, which is useful when slugging around this 56 lb. dance partner across the trail. 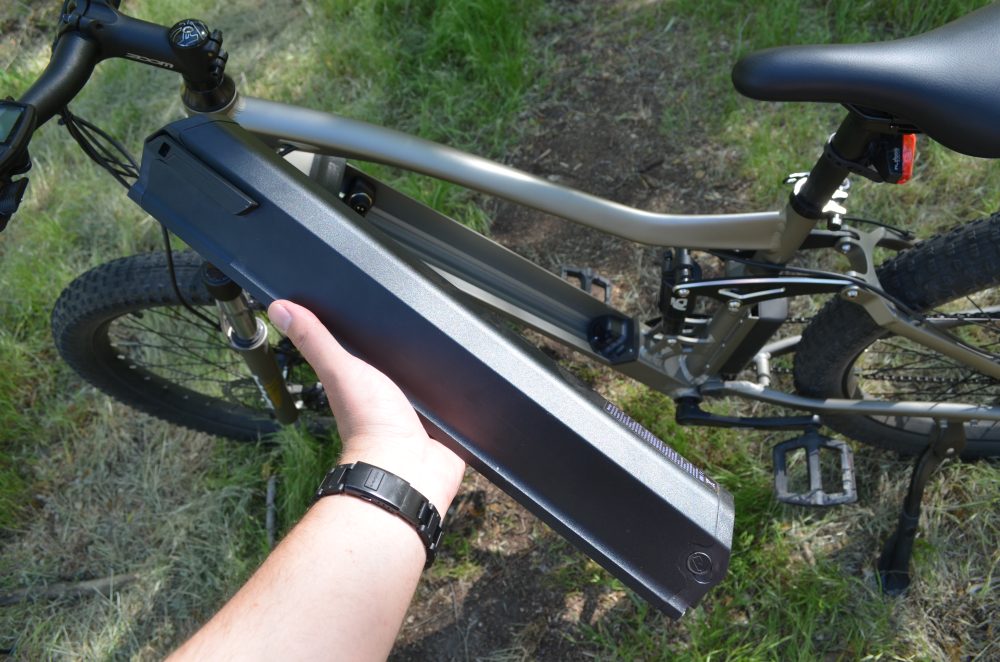 While the suspension is one of the highlights of the bike, the electric system isn’t. The UHVO uses a 36V 10Ah battery, with a 350W rear hub motor, cadence pedal assist, and an exposed controller for maximum savings. This kind of system isn’t the best off-road hill climber. While it does have some good traction on account of the tires, the motor system simply isn’t strong enough to propel an American male up an off-road hill. On the road it’s livable but off-road I have a hard time recommending the UHVO for steep hills.

There are a couple of noticeable silver linings to the 350W rear hub motor. The motor is lighter weight, which actually helps in balance a bit. Also, the motor is very quiet. Since the motor isn’t putting out massive watts, there isn’t much noise coming from it. 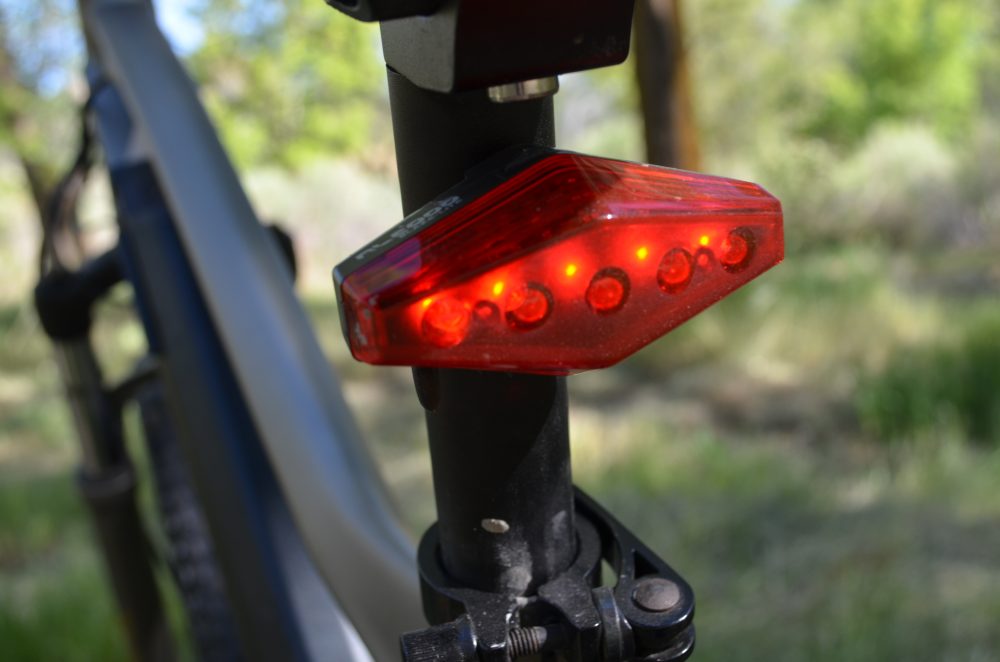 There are a few oddities on the bike, one being the front headlight and the AAA powered rear light. I’m guessing you’d use these at night if you had so much fun riding for hours and lost track of time, but given the small battery size, I find that scenario unlikely. Also, the weak electric system on this bike is paired with a narrow gear range. 14 to 28 teeth with a Shimano Acera derailleur. The derailleur isn’t bad for light use, that’s fine. But, the gear range is too slow for going fast on the road and doesn’t have the range to climb a hill of any consequence, even without the battery.

Considering the price, those aren’t bad things to deal with. I know a lot of people who are looking for an electric mountain bike for exactly this use. Gravel roads, river trails, maybe some grassy fields, simple stuff. There are plenty of options out there for crazy expensive mountain bikes, believe me. But not everyone, including myself, has thousands of dollars laying around to start that sport. The UHVO is a perfectly competent start in that direction. I think the positives are encouraging, and drawbacks are plain to see. 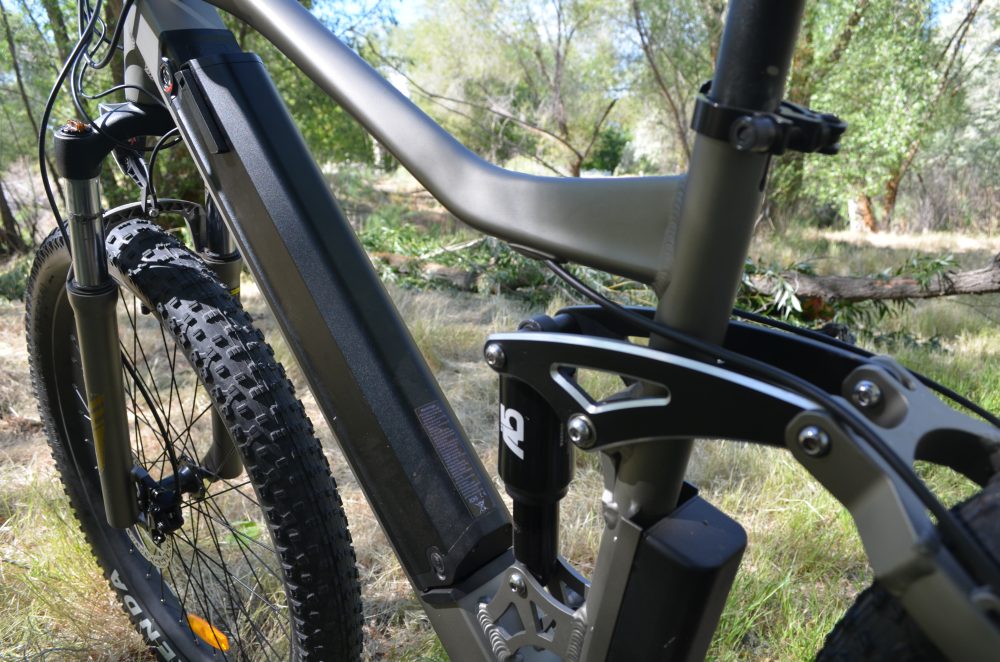 If you want a comfortable dual-suspension ebike, and you want it for a killer deal, then you might want to consider the UHVO. If you’re aiming for light off-road, mostly flat trails, and you’re OK with a range of around 10 to 20 miles, then I think you’ve got a winner with the UHVO. Check out their site to make your pre-order.