EGEB: What exactly powers your ’emissions-free’ EV? This US map shows you

What powers your EV?

Every electric vehicle owner knows that their EVs have zero tailpipe emissions. But emissions may be produced by the source of electrical power. So if you live in the US, do you know how your EV is being powered?

The Office of Energy Efficiency & Renewable Energy released a map that shows what powers each state. They explain:

When an electric vehicle is charged from the electrical grid, there are upstream emissions involved with creating the electricity. The amount of emissions is dependent on the sources used to create that electricity. Below is a map showing the approximate grid mix for each state, as well as the national average. To see estimates of well-to-wheel emissions for vehicles in a specific state, see the Department of Energy’s Alternative Fuels Data Center.

Electrek’s Take: Some readers will occasionally comment or email in, asking why we cover climate-change issues and green energy on an electric vehicle website. This map perfectly illustrates why. The need to switch to clean energy sources has never been greater. There’s some nice wind action going on in the Midwest, but the country has a lot of work to do to get off the natural gas and coal. If you want your EV to be truly emissions-free, then we need to move to renewables. 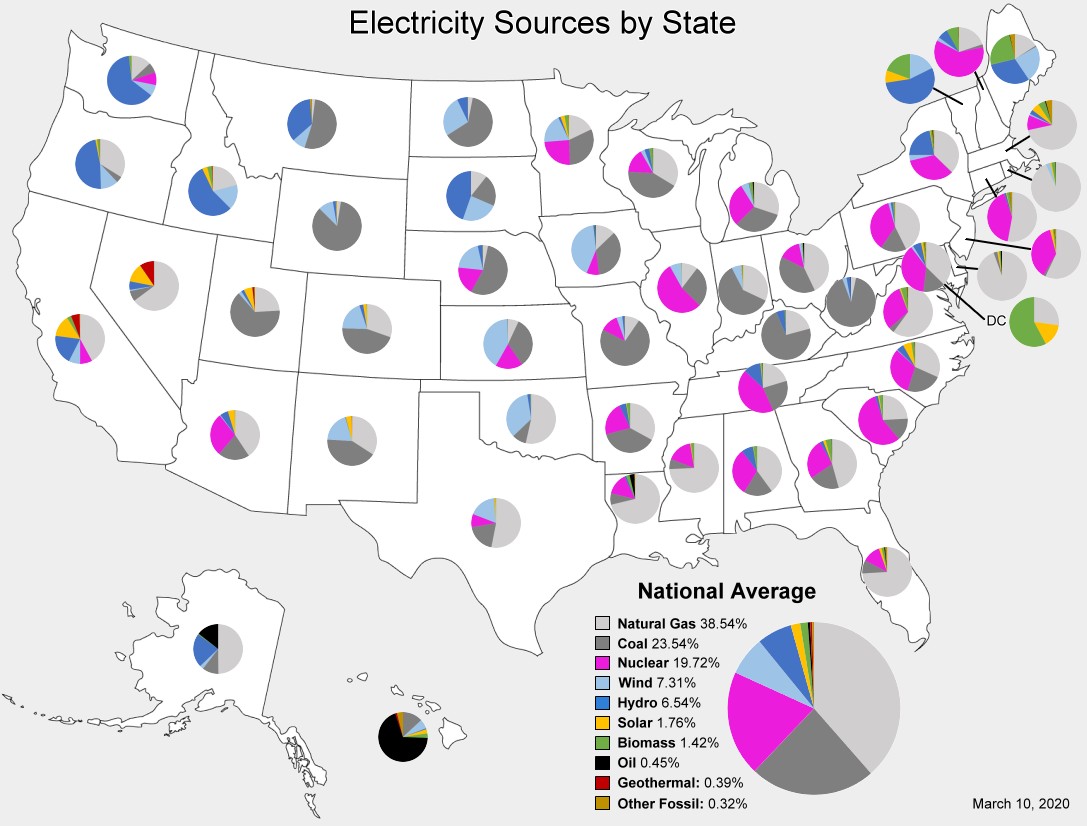 Environmental Protection Agency (EPA) head Andrew Wheeler will be questioned by members of the Senate Environment and Public Works Committee today about rolling back environmental regulations during the coronavirus pandemic.

As Electrek reported in March, the EPA announced a suspension of the enforcement of environmental rules, saying it “will generally not seek stipulated or other penalties for noncompliance with such obligations” during the coronavirus outbreak.

On April 3, Elizabeth Warren (D-MA) and Ed Markey (D-MA) sent a letter to Wheeler, demanding that the agency explain their decision to suspend environmental rules; who authorized it; how records will be maintained; whether meetings held with fossil-fuel lobbyists, and if so, when and with who; and finally, whether any analyses were conducted.

As Electrek also reported, a Harvard University study at the T.H. Chan School of Public Health, updated on April 5, confirmed a direct correlation between long-term exposure to air pollution and a higher coronavirus death rate.

Further, on April 14, the EPA announced that it will not work to lower levels of particulate matter, thus not further reducing air pollution, despite the recommendations of its own scientists to do so.

Last week, nine state attorneys general sued the EPA for issuing what they called a ‘broad, open-ended policy,’ referring to the agency’s March 26 decision to allow companies to determine for themselves if they can meet reporting requirements for air and water pollution during the crisis.

On April 1, ranking member Thomas R. Carper, (D-DE), and 10 other Democratic senators raised concerns about agency activities during and in response to the pandemic, including its lack of a public continuity of operations plan and easing enforcement of air and water pollution rules.

The Spanish government is ready to go net zero. It’s proposing a law, which still needs to be approved by Parliament, that would make Spain run on 100% renewable energy, ban new coal, oil, and gas extraction immediately, end direct fossil fuel subsidies, and make all new vehicles emissions-free by 2040.

According to Climate Change News:

In a briefing paper, it claimed these carbon-cutting measures would boost the country’s economic growth by 1.8% by 2030 compared with business as usual.

The law is expected to shape the recovery from Covid-19. More than 27,500 people have died of the virus in Spain, according to the World Health Organisation – making it one of the worst affected countries in the world.