Electrek has learned that Tesla has quietly made Model 3, and likely Model Y, ready for bidirectional charging, which should enable some game-changing features in the near future.

The advent of electric vehicles is expected to increase the demand for electricity, but electric cars can also offer some advantages by controlling the power load.

A study showed that electric vehicle fleets could save billions of dollars with controllable load and vehicle-to-grid features, and it would enable the grid to optimize its use of renewable energy.

Controllable load, the ability to control when an EV is charging, is possible with any electric vehicle as long as it is connected to a smart charging station or the vehicle itself has an internet connection.

On its own, it can have a massive impact on the grid by reducing peak demand and charging only when demand is lower, but the study shows that vehicle-to-grid technology, which also enables a vehicle to send power back into the grid with a bidirectional charger, would have an even greater impact.

Several automakers, like Honda and Nissan, have been openly exploring the technology, but Tesla, who is arguably the leader in electric vehicles, has been reticent about deploying bidirectional charging in the past. 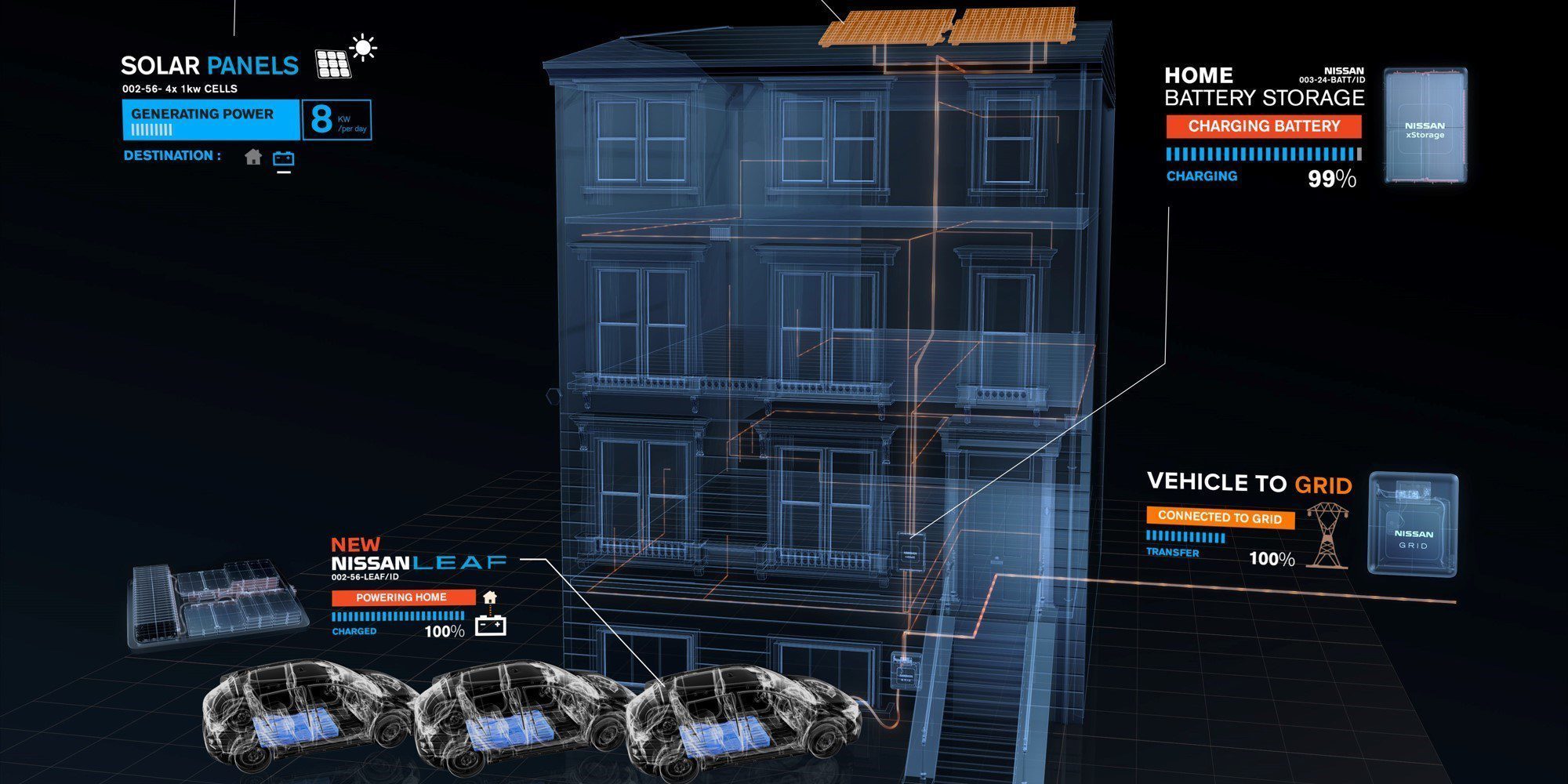 Both CEO Elon Musk and cofounder and former CTO JB Straubel have expressed concerns about enabling bidirectional charging in Tesla vehicles due to the potential of accelerated battery degradation and also the moderate value with a relatively small fleet.

In a recent filing with the Texas electric utility commission in which Tesla was responding to questions about how electric utilities should approach electric vehicles, the automaker summarized its view of vehicle to grid technology:

Vehicle to grid benefits can be recognized much more efficiently when EV deployment is at scale rather than in the early adopter phase. At the same time, any discussion regarding the capabilities of EV related technologies must recognize as a first principle that customer experience and willingness for participation is key. There certainly may be an opportunity for future projects and programs that focus on advanced technological integration, such as the eventual aggregation of EVs in the future to provide grid services in wholesale markets. In any setting, it is important to remember that EVs are modes of transportation first and foremost for customers. There is also an opportunity to evaluate stationary storage assets first to provide similar grid services capabilities from a wholesale electricity market perspective.

While those comments are not too encouraging, they do note that there’s value in vehicle to grid once the EV fleet becomes large enough, which is starting to become the case.

Straubel noted in a presentation in 2015 that once Tesla’s fleet reaches 1 million vehicles, it would have a significant controllable load capacity: 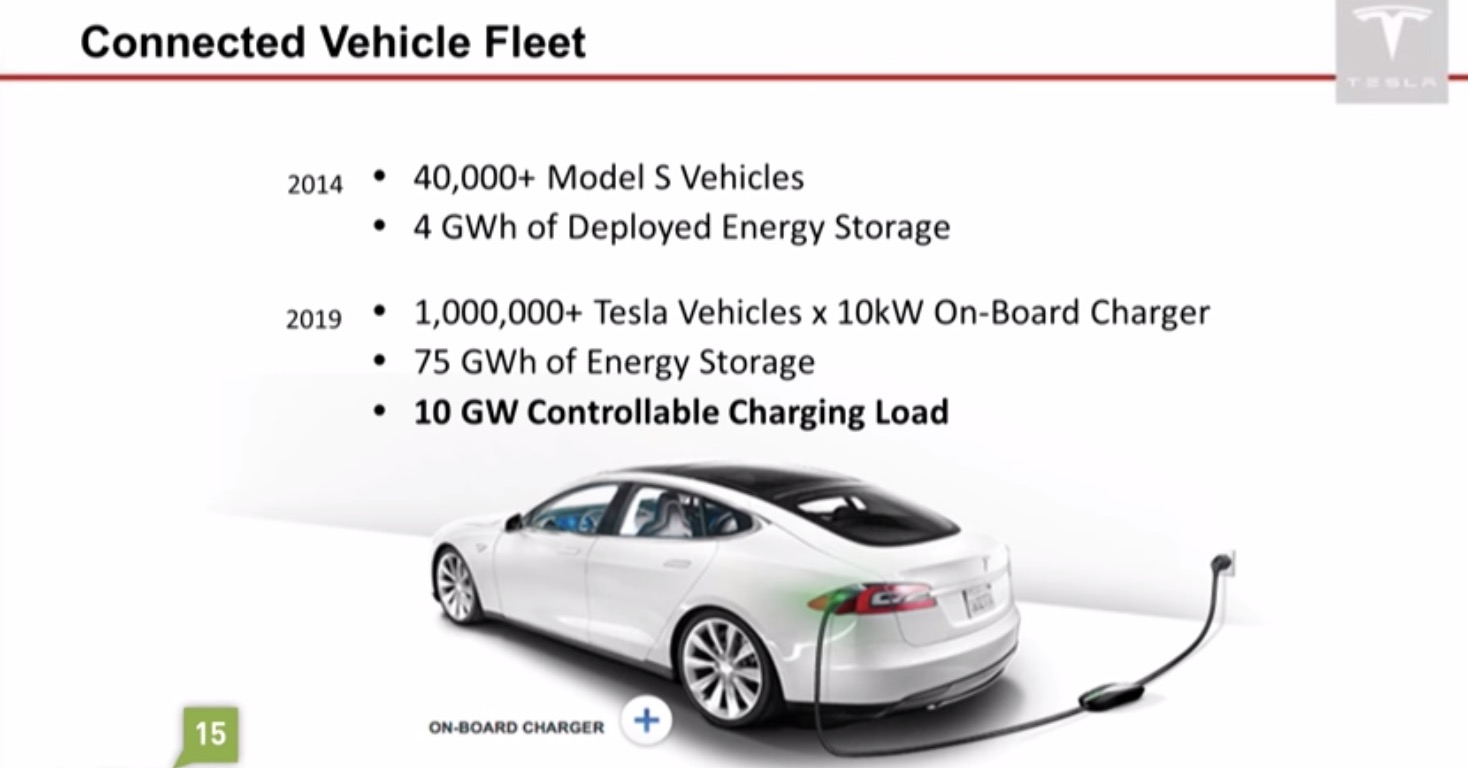 At the time, Straubel estimated that Tesla would hit a million cars in 2019, and he wasn’t too far off, since Tesla produced its 1 millionth electric car in March 2020.

In a clearer indication that Tesla is not completely overlooking vehicle to grid, Musk stated that Tesla could “revisit” vehicle-to-grid technology in 2018.

Electrek has learned that Tesla has already prepared its onboard vehicle charger for bidirectional charging.

Marco Gaxiola, an electrical engineer who participated in a Model 3 teardown for a Tesla competitor, reverse engineered the electric car’s charger and found it to be ready for bidirectional charging.

What I learned on reverse engineering the Model 3 charger, was that the design is fully bidirectional. This means power can be converted from AC to DC the same way as the previous example, but also power can flow in reverse direction, coming from the battery and ending up on the AC side. This is known as DC to AC inverter, and when this technology is present in a vehicle, it is known as V2G (Vehicle to Grid).

Here’s a schematic of the charger that Gaxiola produced as part of the reverse-engineering of the vehicle: 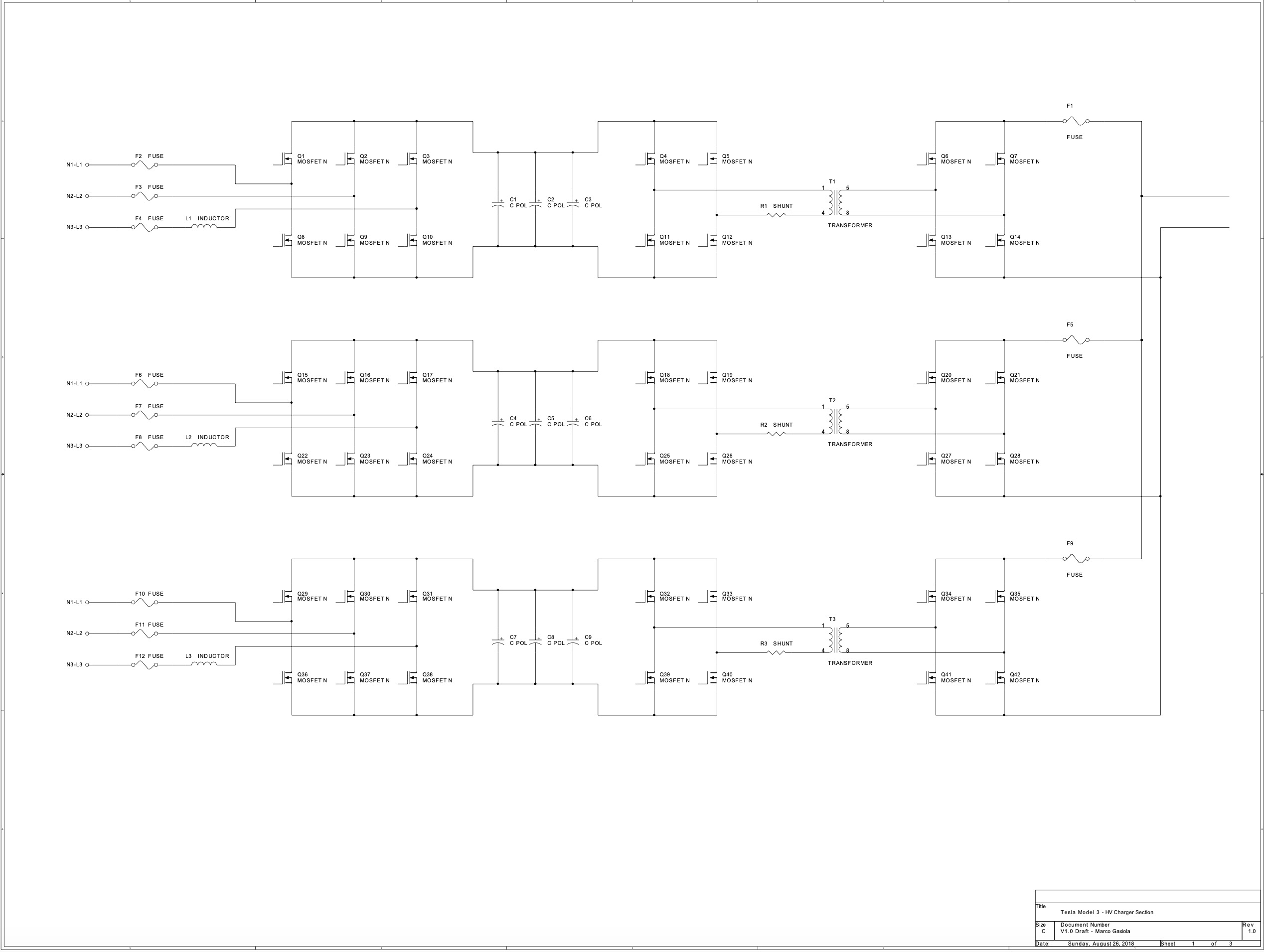 The engineer added about the design of Tesla’s onboard charger:

To complement this, the bidirectional design is replicated 3 times across the same PCB on the Model 3 charger. Another example of redundant design that assures a working process even if one of the circuits fails. Additionally, it is 3 phase design, so it can be used worldwide.

Gaxiola believes that the vehicle to grid capacity in the Model 3 could be enabled through an over-the-air software update.

This has massive implications. It means that Tesla could eventually unlock a lot more value from its customer fleet, both for the vehicle owners and for Tesla itself.

In terms of practical features for owners, they could potentially power their house with their Tesla vehicle during a power outage or charge another electric vehicle with their own.

However, the real value of bidirectional capacity lies in grid services.

With the owners’ permission, Tesla could offer electric utilities the ability to access power from the vehicles on the network in other to offset electricity demand during peak hours.

Tesla already has the capacity to do that with its Autobidder product operating with virtual power plants consisting of Powerwalls in Australia and Vermont.

The only difference is that Tesla vehicles would be providing power instead of home battery packs, like Powerwalls.

While the concern of faster degradation due to the battery packs cycling more than by just driving on the roads is still there, it is becoming less of a concern as Tesla keeps improving battery longevity with new battery cells — leading to its “million-mile battery.”

Tesla owners would still have the option to opt in or out of the program, and they would also likely control when the electric utilities can access the energy in their vehicles.

As Straubel previously pointed out, with a million vehicles on the road, Tesla’s fleet has a theoretical 10GW demand offsetting capacity, which is extremely valuable to electric utilities.

Of course, this capacity is distributed around the world, but it is still significant in markets where Tesla vehicles are popular, and local utilities would be more than happy to pay to access that power.

Owners would be compensated for the utility using their vehicles, and Tesla would likely get a commission through its Autobidder platform.

Now that we know that Tesla already has hundreds of thousands of Model 3 vehicles bidirectional-ready on the road, I think this new product could be released sooner than people think.

One of the most interesting features of Tesla’s implementation of bidirectional charging is that they don’t require an inverter outside the vehicle, like the Wallbox Quasar used on the Nissan Leaf.

It would work with Tesla’s own Wall Connector or potentially with any home charging station.