What’s the ultimate two-EV driveway and how to charge both? See a gallery of choices 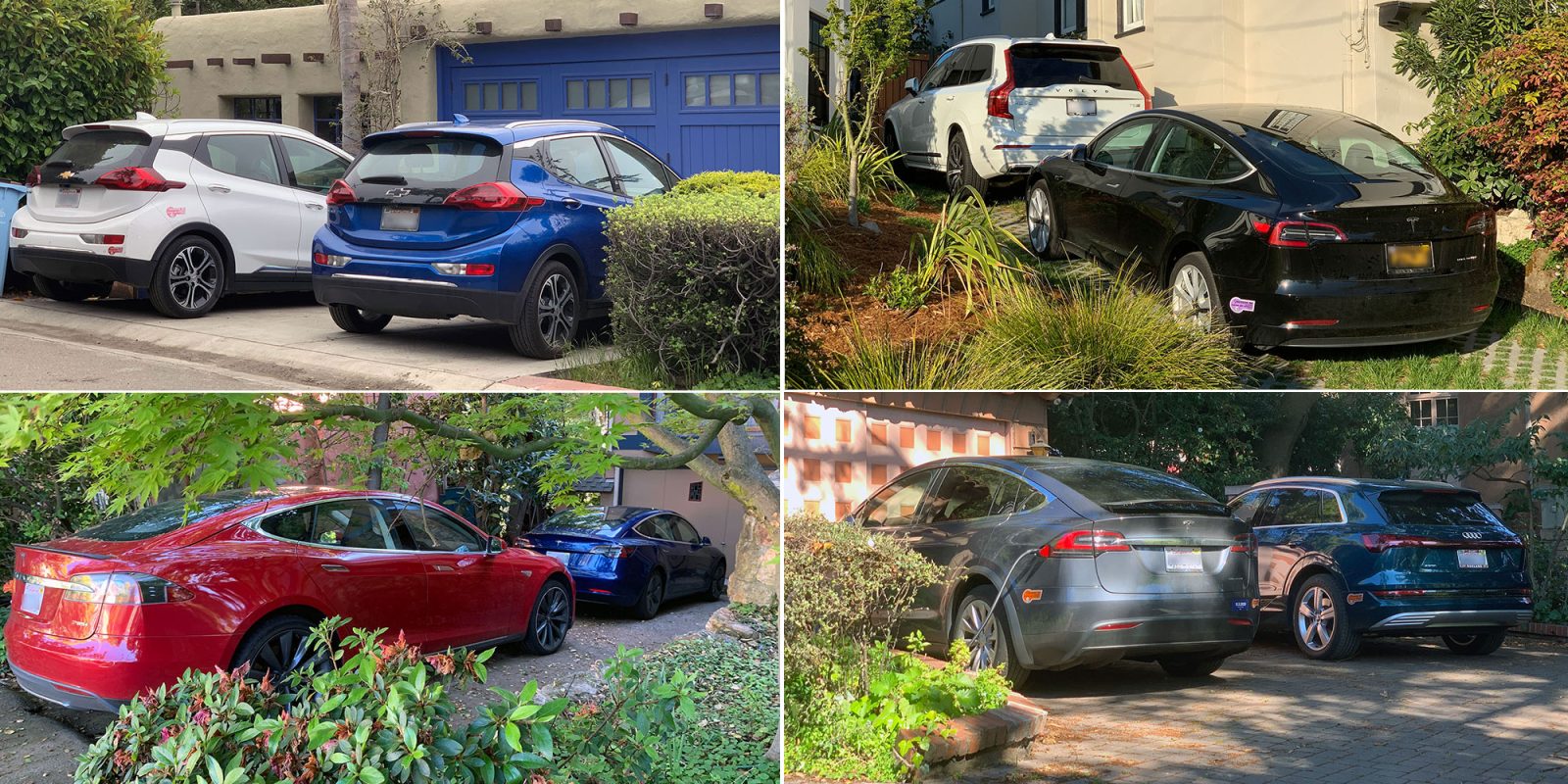 Pandemic stay-at-home orders are getting more consumers to consider buying an electric car. And the coronavirus lockdown is also inspiring more people to take daily walks in the neighborhood.

On my strolls in the East Bay, across from San Francisco, I see several EVs on every block. With my neighbors sheltering in place, I am also discovering a lot of driveways with two green vehicles. I never would have expected some of the combinations – or all the different ways to set up home charging for two EVs.

Norway might have the world’s highest percentage of EVs, but my neighborhood isn’t far off.

Whenever I hear bogus arguments about how the mass adoption of electric cars is going to bring down the entire US electric grid, I point to my neighborhood. When you add these duo-EV houses to all the single EVs, some blocks have 10 to 20 plug-in cars. But what do you know? The grid, and even our local transformers, keep chugging along.

Charging Two at a Time

The big question is how individual homes manage to charge two EVs. I suspect that most folks use a single Level 2, 240-volt charger and take turns.

After getting your second EV, your first instinct might be to install a second 240-volt charging station. That’s an option, but it takes up more space and essentially doubles the cost.

A likely better choice is the Clipper Creek HCS-D40 Dual-Charging Station. The HCS-D40 is a 32-amp, Level 2 hard-wired station that can charge two vehicles simultaneously on one circuit. The HCS-D40 automatically splits power between two vehicles, with up to 16 amps of electricity each when both are charging – and up to 32 amps when one vehicle is charging. It’s equipped with two 25-foot charging cables so most owners should be able to reach both cars.

The HCS-D40 cost $1,369, so it’s significantly more expensive than a single-cable station. Perhaps you could sell your first charging station to recoup some cost. Ideally, the dual-charging HCS-D40 would be the first one that got installed. But who thinks that far ahead? 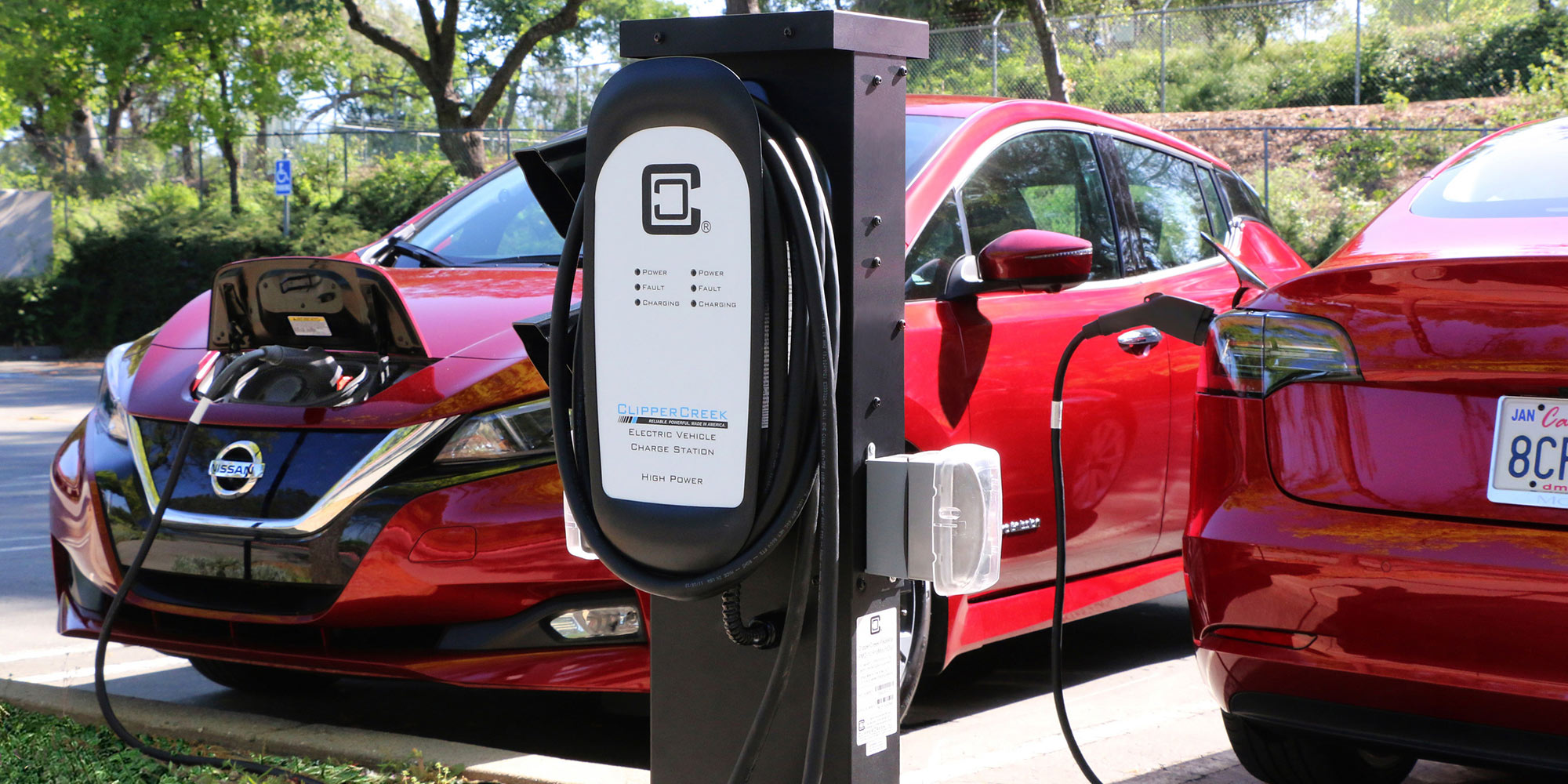 It’s common now for new EVs to come with 240-volt portable cables. Another option is installing two outlets, commonly a NEMA 14-50, while ensuring that you have sufficient amperage to use two at the same time. Then plug in one or both of the portable charges as needed. A consultation with an electrician would be smart. I personally have a hard-wired Level 2 station in my carport, with a separate Level 2-suitable outlet for a second car to use a portable charging device.

A better alternative, although still expensive, would be a pair of JuiceBox Pro 32 units. A pair of these stations, which are $599 each, can manage loads on a single circuit.

And then, the simplest and lowest cost option is the two-tiered approach. One car gets the Level 2, 240-volt charger, which likely adds about 25 miles in an hour. But the other settles for a 120-volt trickle charge, just managing 3 or 4 miles per hour.

The car with the lower state-of-charge ­– or if the assigned driver has a long commute planned for the next day ­– is the one that gets the faster charge. The EV that can tolerate a slow top-up gets plugged into a standard outlet.

But first things first. Which two EVs go best together?

All of the following photos were taken on my neighborhood walks. Perhaps this sweet All-American color combo of a Tesla Model S and a Tesla Model 3 is in your future.

Not rich enough for your blood? Need more space? These guys went with a Tesla Model X and an Audi e-tron.

Two sizable SUVs take up a lot of space and the X’s falcon doors are not for everybody. A nearby driveway kept the e-tron, but matched it up with Hyundai Kona Electric. That’s an original combo.

This neighbor still needs to replace the conventional Prius with a second plug-in car. Many driveways in the neighborhood are single lane so I imagine these guys have to shuffle the cars around, moving the Model 3 in the spot next to the house, but blocking the way out for the EV with the hybrid.

These side-by-side Chevy Bolts have an easier time. It appears that one charger with a long cord allows the owners to easily swap them out. If both are fully charged, I wonder how they decide which one to take.

The flexibility of having one pure EV and one plug-in hybrid is appealing. Nearly all local trips can be purely electric. But when it comes time for a meandering road trip with maximum flexibility, the plug-in hybrid is ready to go – although with an increase in your carbon footprint. If you’re not a purist, this marriage of a Tesla Model 3 and a Volvo XC90 plug-in hybrid is impressive. 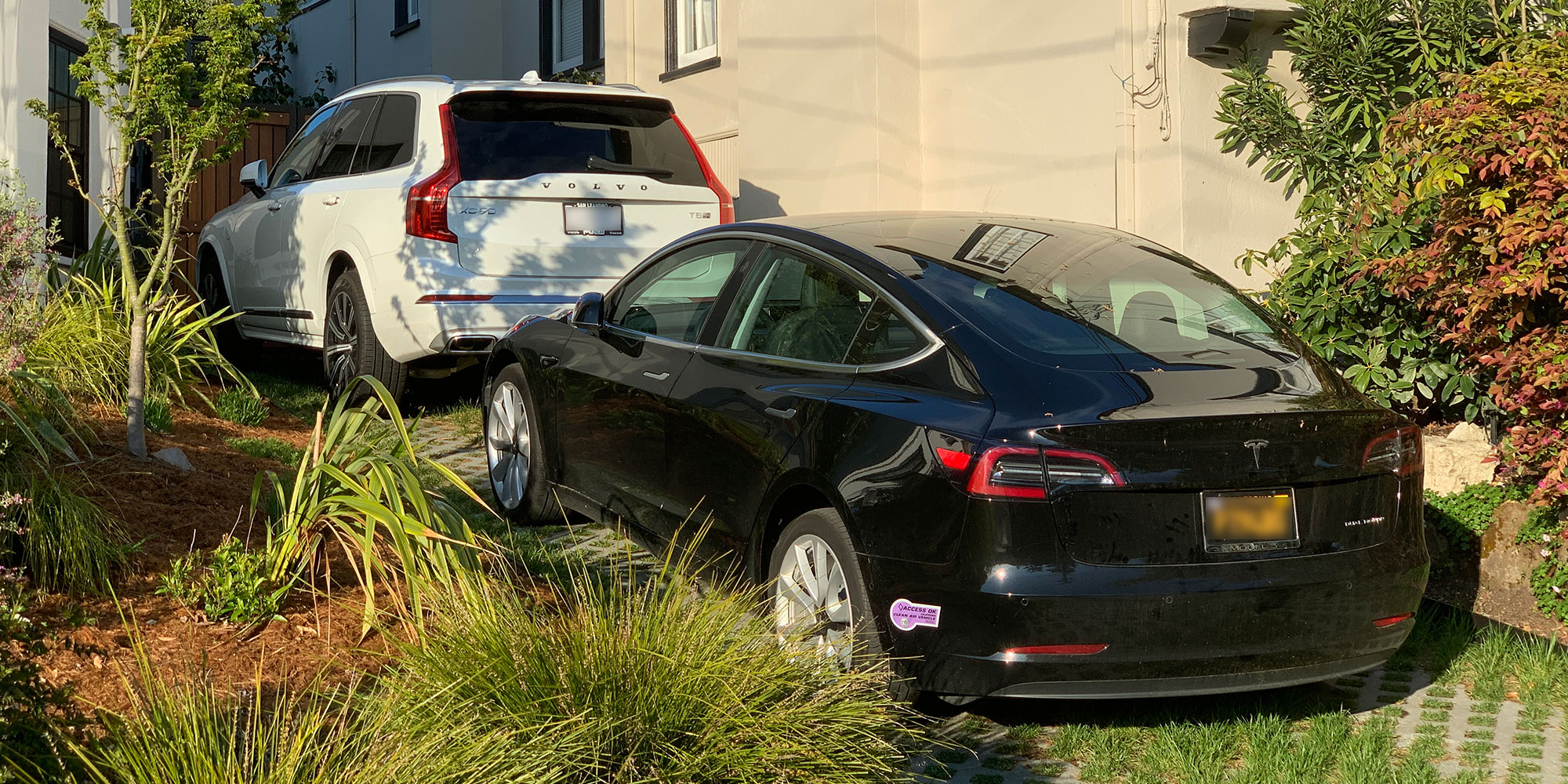 On the other hand, a selection of two plug-in hybrids feels really tentative. Although these guys get bonus points for originality with their Audi A3 e-tron and a Subaru Crosstrek plug-in hybrid. 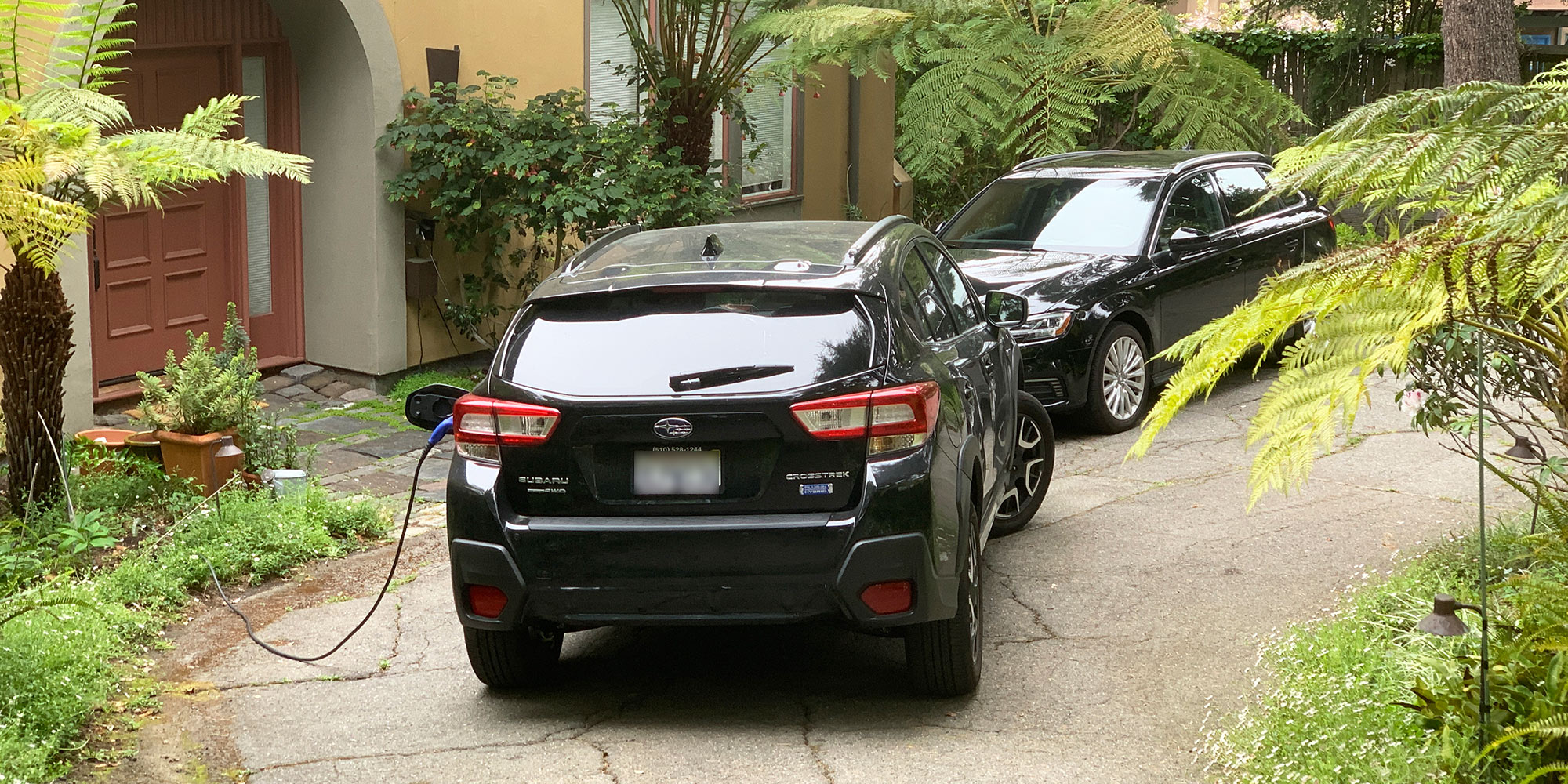 Here’s a Volvo XC60 plug-in hybrid parked on the street. But it’s not clear if it belongs to people charging the Prius PHEV on the left or the Tesla Model 3 charging up on the right. 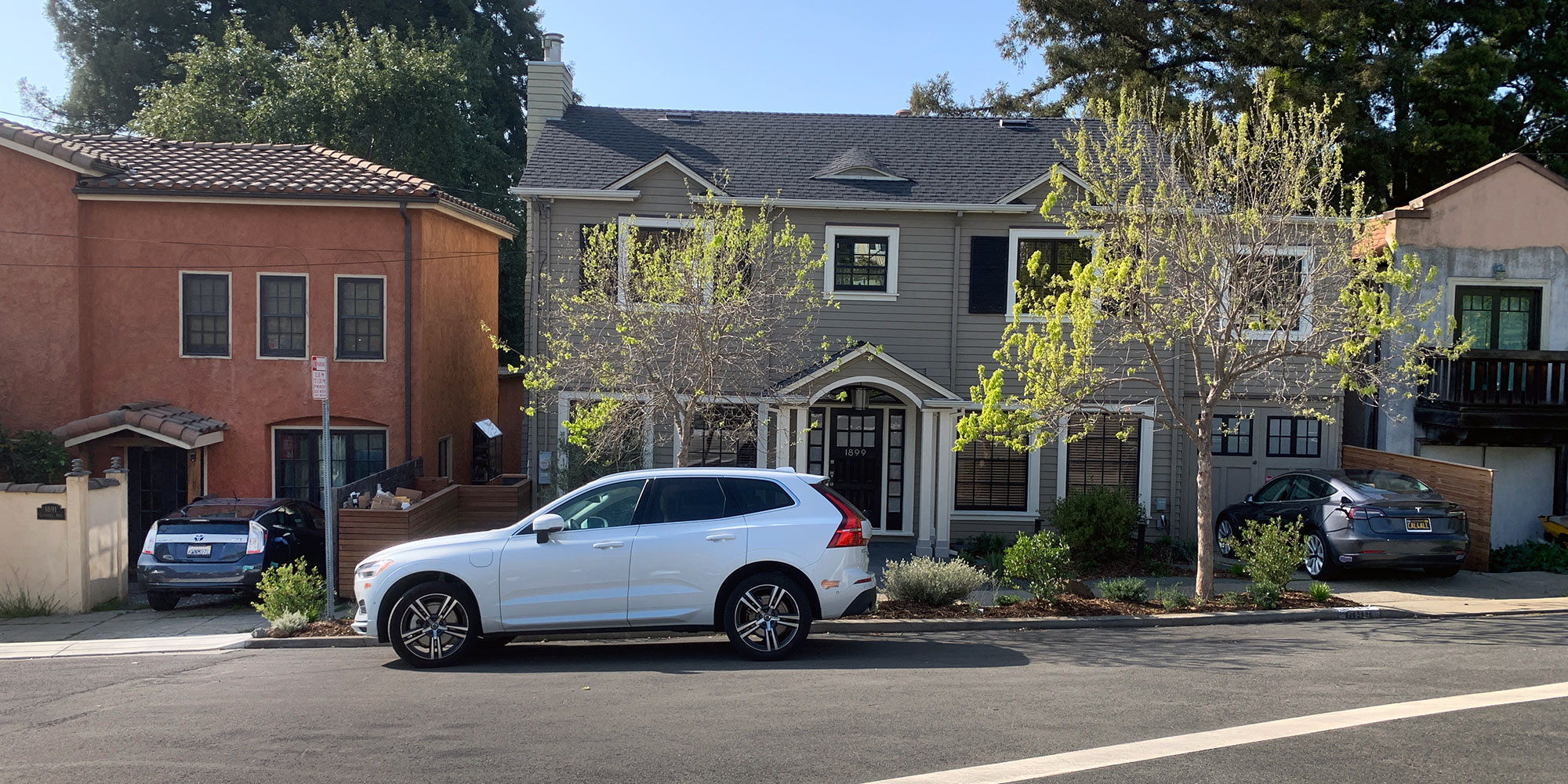 Some brand loyalists seeking a clean and green driveway have a challenge. These neighbors are obviously Honda fans, but the Japanese automaker is out of the EV game until its partnership with GM produces two new Honda-branded EV in 2024. Until then, these neighbors will probably keep their Honda Clarity Plug-in Hybrid and Honda Civic CNG parked in front. Or maybe it’s time to upgrade the CNG car with an EV. 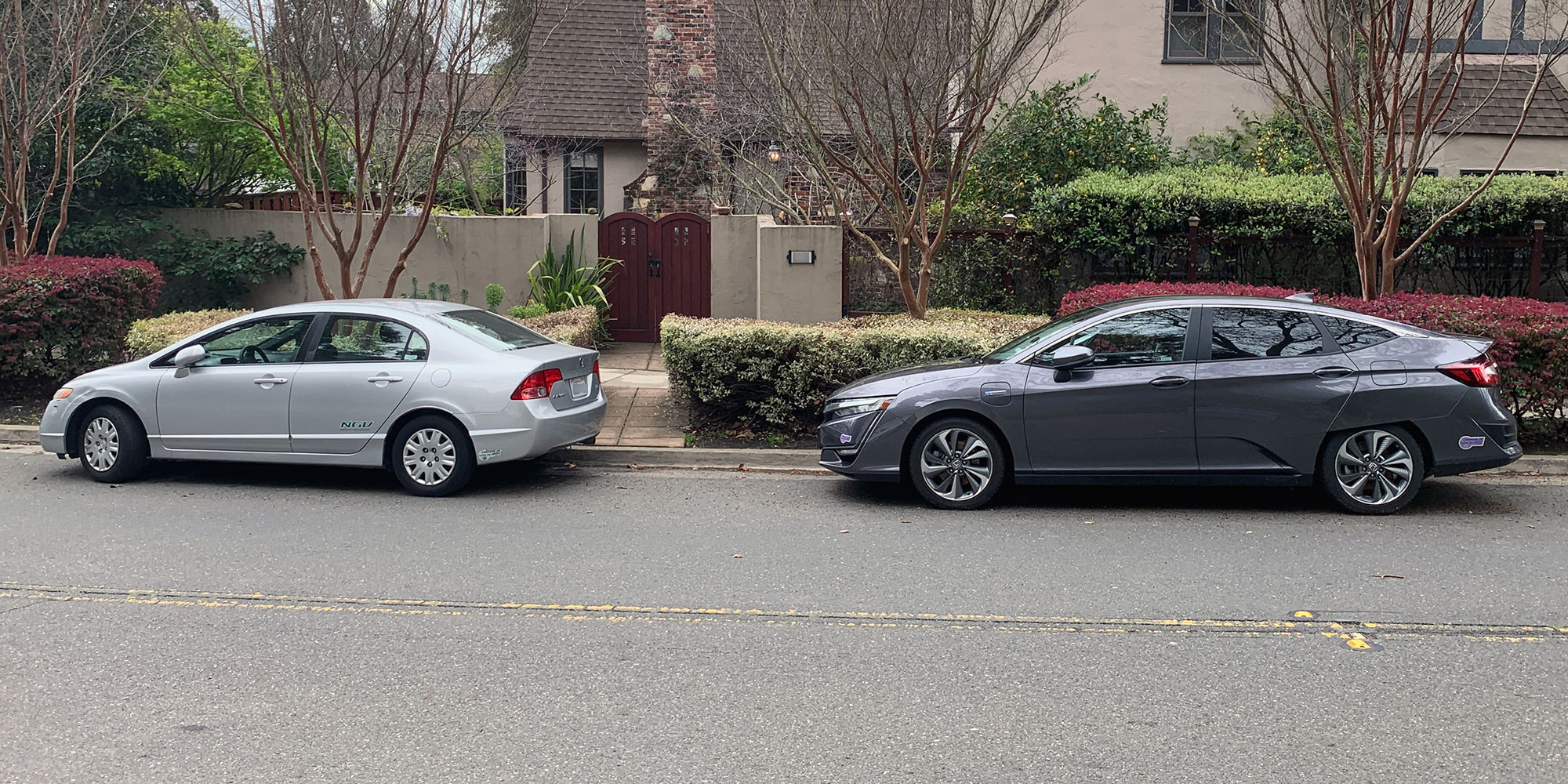 That’s all I’ve got for now. But I’ll keep walking and snapping photos when I see other all plug-in households nearby.

If you already have two EVs, leave a comment below about which two you chose and why. And tell us how you solved the challenge of charging both of them. Or share ideas about your future dream driveway.