In the first quarter of 2020, green energy became the UK’s main power source for the first time ever, according to new analysis by European energy insight company EnAppSys.

According to Current News:

Green energy generated 35.4TWh between January and March. In first-quarter 2019, they produced 27.2TWh.

Storm Ciara, for example, set two wind generation records, with wind turbines generating 56% of the country’s electricity at 2 a.m. on Saturday February 8, the most at any one time, and accounting for 44.26% of power produced across the whole day.

G-20 energy ministers met on Friday and agreed to “commit to doing whatever it takes, both individually and collectively” to try to save the energy sector. And on Sunday, oil-producing nations agreed to the largest production cut ever in order to stabilize oil prices.

On Sunday, the New York Times reports, those figures ended up being slightly smaller than originally agreed:

The plan by OPEC, Russia, and other allied producers… will slash 9.7 million barrels a day in May and June, or close to 10% of the world’s output.

Analysts expect oil prices, which soared above $100 a barrel only six years ago, to remain below $40 for the foreseeable future. The American oil benchmark price was just over $23 a barrel on Sunday night.

Non-OPEC countries like Brazil and Norway have already been cutting production. It’s unclear whether the US made a formal commitment to reduce oil production, but it has agreed to help Mexico with oil reductions. But according to the Financial Times:

Dan Brouillette, US energy secretary, told the conference he estimated US oil production would be reduced by nearly 2 million b/d this year, or at least 10% of the country’s output.

The cuts are huge, but the drop in demand is bigger, so whether the reduction will keep the industry from collapsing remains to be seen. US oil companies have been laying off thousands of workers and ceasing production. 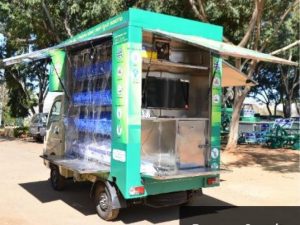 The vehicles are being used in a large number of districts in India, where they procure produce directly from the growers and deliver straight to consumers.

The solar panels on the vehicle’s roof helps to control the temperatures within, in order to keep the fruits and vegetables fresh, and the solar energy can also be used for other purposes.

The evaporating cooling technology in the vehicle keeps produces fresh, hygienic, and dust-free.

(Writer’s note: If I had a fresh produce e-van come to my house so I could buy fruits and vegetables that were sourced from the growers themselves, I’d be ecstatic.)