Another leak shows that Tesla is working on an air suspension for Model 3 and Model Y air despite Elon Musk denying that the vehicles will get the feature.

For Model S and Model X, Tesla developed a “Smart Air Suspension” option, which eventually became standard in both models.

It automatically adjusts the car’s height at different speeds and locations for efficiency and comfort.

When launching the Model 3 in 2017, CEO Elon Musk said that the new suspension would launch six months later with the dual motor version of the car.

But at the time, Tesla ran into a lot of problems ramping up Model 3 production, and a lot of versions of the car were delayed.

The dual motor version didn’t launch until almost a year later, and it didn’t come with air suspension, though Tesla was working on the feature.

In 2018, a Tesla Model 3 with dual motor and air suspension was spotted on a racetrack during testing, but nothing came out of it.

Last summer, Musk confirmed that air suspension wasn’t in the plans for Model 3 “at the time.”

But now we get another indication that Tesla made sure Model 3 and Model Y would be ready for an air suspension.

An employee of a Tesla collision center posted an image of the 12-volt electrical architecture of the Model Y on Reddit before deleting the post: 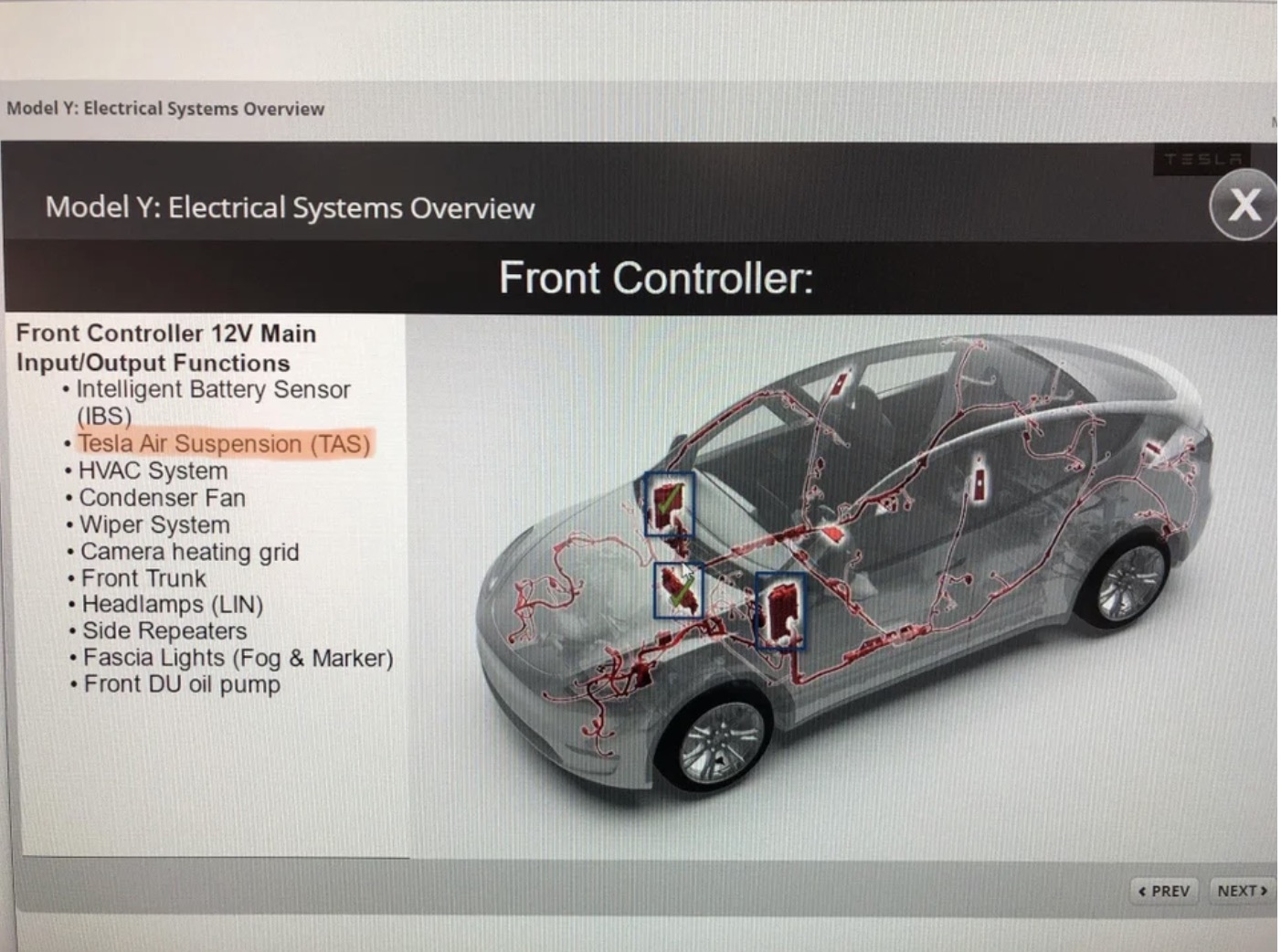 It shows that Tesla built the 12-volt architecture of the Model Y to work with its own air suspension.

The document is just the latest in a series of evidence that Tesla was or is at least thinking about releasing an air suspension option for the Model 3 and Model Y.

Tesla definitely considered releasing an air suspension for Modle 3 and Model Y, but it looks like they prefer to keep the feature for their higher-end offerings… for now.

I wouldn’t be surprised if Elon changes his mind and starts offering the option once Tesla updates Model S and Model X – creating more differentiating factors other than the air suspension for the more expensive vehicles.

It looks like Tesla has everything ready on the wiring harness side of the architecture and they would just need to add the suspension as an option.

In the meantime, Elon doesn’t want to affect sales by having people wait for the feature on Model 3 and Model Y.

Would you be willing to pay for an air suspension for the Model 3 or Model Y?

I’d be willing to pay up to $3,000 for an air suspension on a Model 3 or Model Y AWD or Performance.

Tesla got so much better at making air suspension over the last few years and the latest version they have in the Model S and Model X is really good. I think it’s definitely worth a few thousand dollars and higher repair costs.