As far as electric vehicles go, electric bicycles are famously energy-efficient. Most can easily travel 100 miles (160 km) on around $1 of electricity. But what if instead of paying for that electricity, you could capture it from the sun instead? That’s exactly what Richard Drumm did when he built a simple DIY electric bicycle solar-charging setup.

Richard actually got into the project due to his previous interest in electric vehicles. He has long wanted an electric car, but hasn’t yet found one in his price range.

After discovering electric bicycles on Facebook, he began researching them more intensively and found that they could solve his need for electric transport, plus add some beneficial exercise.

He eventually landed on a RadMini electric bicycle from Rad Power Bikes. As Richard explained it to me:

When I saw the $1,500 price tag of the bike I about fainted. Whoa Nellie! I’d never spent that much on a bicycle before. My Schwinn Varsity probably cost $350 or $400 back in the day (1971?). Then I saw what the Spandex crowd was spending on their fancy road bikes ($6K-10K) and I suddenly felt better. So I took the plunge and haven’t looked back. I just bought a Rad Mini Step-Thru for my youngest daughter. We’re a two-Rad family!

For me the Rad Mini is an exercise bike with benefits! I don’t have a safe bike trail at my rural farm, so I haul the bike in my SUV to various places to ride it. One of the best riding options is the popular Rails-to-Trails parks that have sprung up.

If I lived in a city I would find some way to use the Rad to commute to work. The beauty of using an e-bike to commute instead of a manual bike is that you can use more of the battery to get you TO work, so you don’t arrive sweaty and tired. You can bring your battery and charger into your workplace with you and charge it while you work. Then you can get a workout on the ride home. 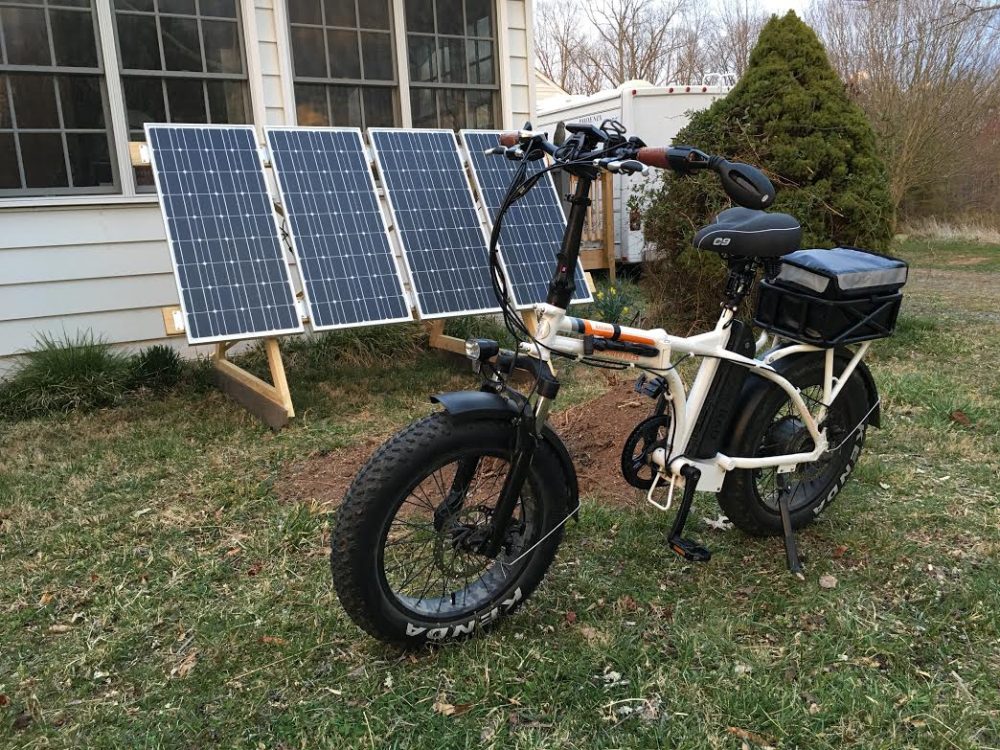 Richard’s path towards solar charging his e-bike began sooner than he had realized. A few months before getting his first e-bike, he bought a Goal Zero Yeti 1400 power station to power his refrigerator and other necessities during power outages that sometimes plague his area. The power station can be charged from the grid or via solar panels, with the latter option turning it into a solar generator. Essentially, it replaces a gas-powered generator.

While Richard originally charged the power station from the grid, he eventually decided to pick up some Renogy solar panels and turn it into an off-grid system. 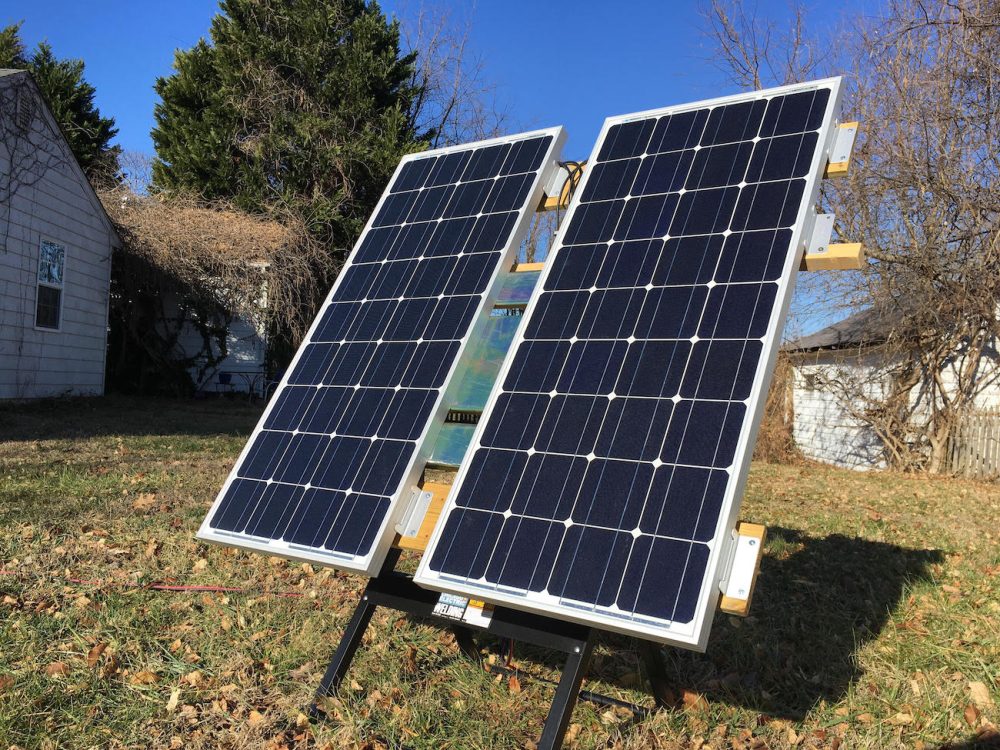 I asked him why he chose solar:

Why solar? Heck, for me it’s a no-brainer. Free money from outer space! What’s not to love?

I had originally set up two of the panels on a simple frame on a $75 tilt-top welding table. I grew tired of hauling the non-weatherproof table outside when the Yeti needed charging. Thus I started designing various versions of frames to hold the solar panels full time. Initially I designed a version that would track the sun, but I came to the realization that the cheapest part of any solar power setup is the panels. If one needs more power it’s cheaper to just buy more panels than make your panels track the Sun. Plus, the tracking frame meant that there would be a moving part, which is a potential point of failure. Unlike NASA’s mantra, failure is always an option.

I’m the producer and editor of the 365 Days of Astronomy podcast, a daily podcast, free on iTunes, and am an amateur astronomer. I calculated the winter, equinox, and summer sun altitudes and did a lot of head scratching as I chewed over my options. I settled on a simple equilateral triangle as a viable option with maximal structural strength. The frame isn’t attached to the ground, so if I decide that a different placement is called for, I can easily slide the whole frame with panels attached to the new location.

Personally, I’ve got a bit of a background in these projects, having written the industry guidebook on such DIY solar power projects, though Richard doesn’t seem to have needed any help. He created a simple, easy-to-use system with minimal pieces to the puzzle.

His system consists of four Renogy 100W solar panels and a homemade frame to support them, seen below. 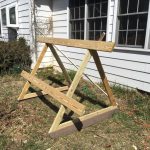 To keep it simple, he didn’t need to combine a separate charge controller, battery bank, and inverter. Instead, he wired the four solar panels in parallel and fed them into his power station. That keeps the battery in the power station topped up, and he can run the e-bike charger (and the fridge or any other devices) directly from the power station.

Sure, there’s a bit of an efficiency loss by first converting the 12VDC solar panel output into 110VAC and then letting the e-bike charger convert it back down to 48VDC, but it certainly makes for a simple setup. 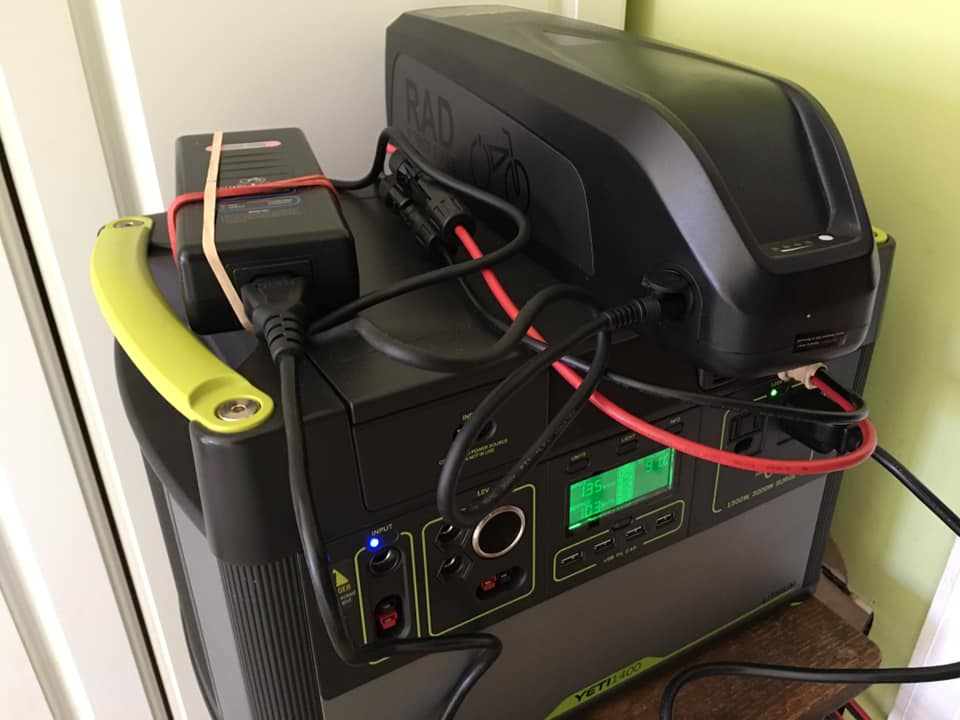 Solar charging an electric bicycle isn’t cheaper than grid power at first. But if you’re already creating a system like Richard’s to provide backup power during an emergency or to take your refrigerator or other appliances off grid, this would be a simple, DIY way to do it. And in an emergency with an extended power outage, this system will keep your e-bike running.

And I don’t know about you, but I’ll feel a lot better in the apocalypse if I can reliably charge my electric bike!