Tesla is starting to release a new over-the-air software update with a lot of small new features and improvements, including new Autopilot visualization in several markets.

In 2020, Tesla has slowed its roll when it comes to software updates.

We reported on one yesterday, but it only affects a relatively small number of recently built Model S and Model X vehicles.

Now Tesla is starting to push a new and more significant update: 2020.8, which looks like the biggest update of the year so far.

Not many details are known at this point since Tesla is only gradually releasing the update to a few cars at a time, but Tesla hacker “green,” who has been known to be able to dig into Tesla’s software, has released a few interesting details on Twitter:

The Full Self-Driving Preview was released late in December and consists of new driving visualizations that include stops and traffic lights. It doesn’t sound like there’s anything new here other than the fact Tesla is pushing the new visualizations to other markets than the US.

As for third-party charging station being displayed on the in-car map and navigation system, It’s something that was first reported in Europe last month.

With growing third-party charging networks, Tesla has started helping owners navigate to them, and not only the Supercharger and Destination charging stations.

It especially makes sense in Europe where Tesla vehicles have access to growing networks of CCS DC fast chargers, but Tesla is now apparently also starting to push the feature in the US, starting in California.

The update comes after Tesla made a deal with EVgo to have its proprietary connector directly at their station without an adapter.

Update: Here are the notes from Tesla:

Now you can find third-party charging options with your in-car navigation – select sites are available now in Belgium, Netherlands, Germany, Switzerland and Austria with additional locations across Europe coming soon. To access, press the lightning bolt icon on the bottom of your touchscreen, scroll down and select a Supercharger, Destination Charging or third-party charging location to navigate to.

Not much is known about how Tesla has improved its regenerative braking yet, but it sounds like it might only apply to recently built Model S and Model X vehicles.

Update: Here are the notes from Tesla:

“Regenerative braking force has been increased to improve the driving experience and increase how much energy is actively returned to the battery when slowing down.”

The new track Mode V2 was unveiled earlier this week along with Tesla’s new “Model 3 Track Package” with new wheels, brakes, and more.

The new update is a much more advanced and customizable updated version of the software introduced last year: 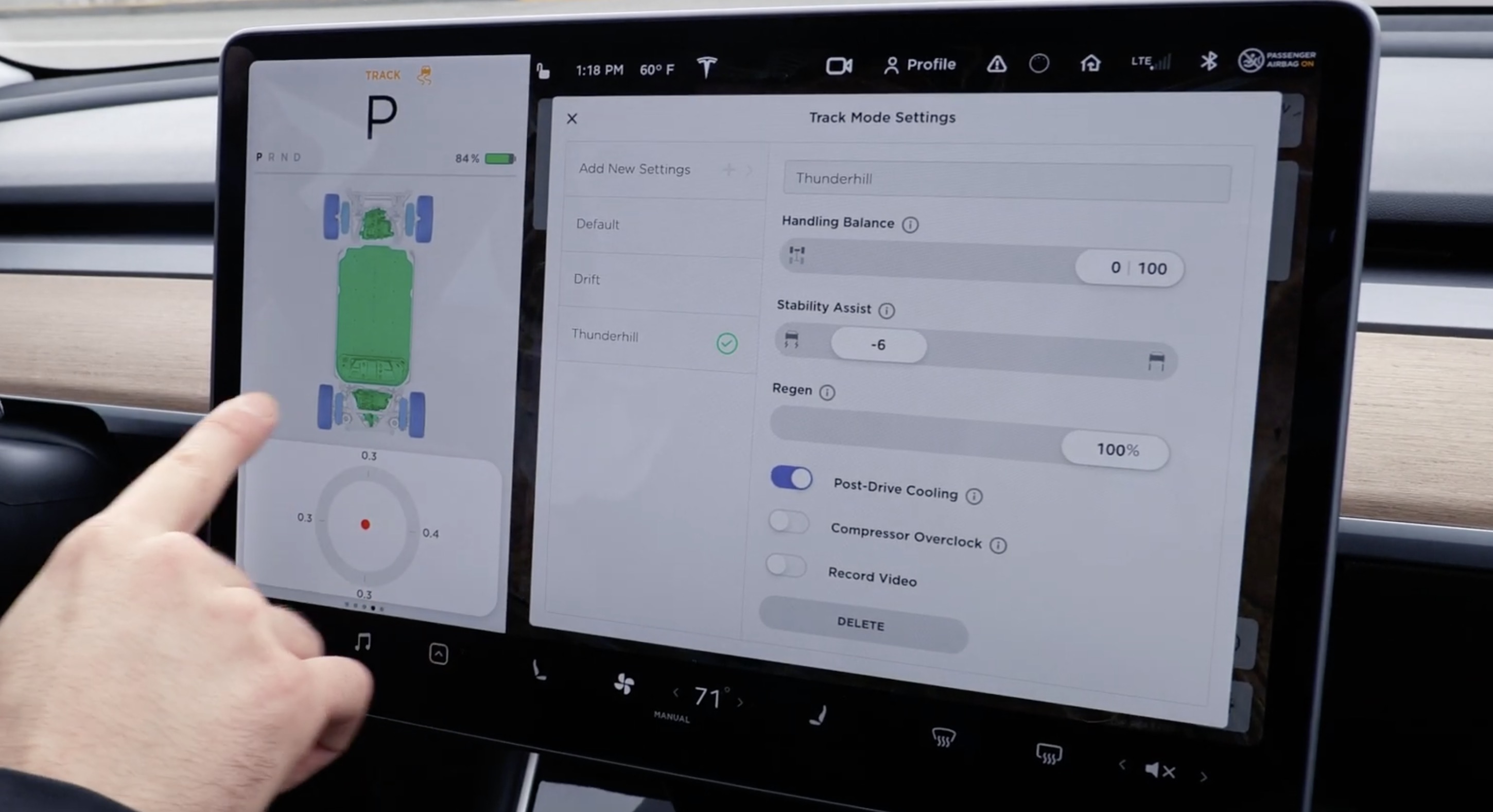 They can even record video of their performance on the track using the new Track Mode.

It also appears to feature an accurate satellite and interactive view of the map and tracking of the laps. 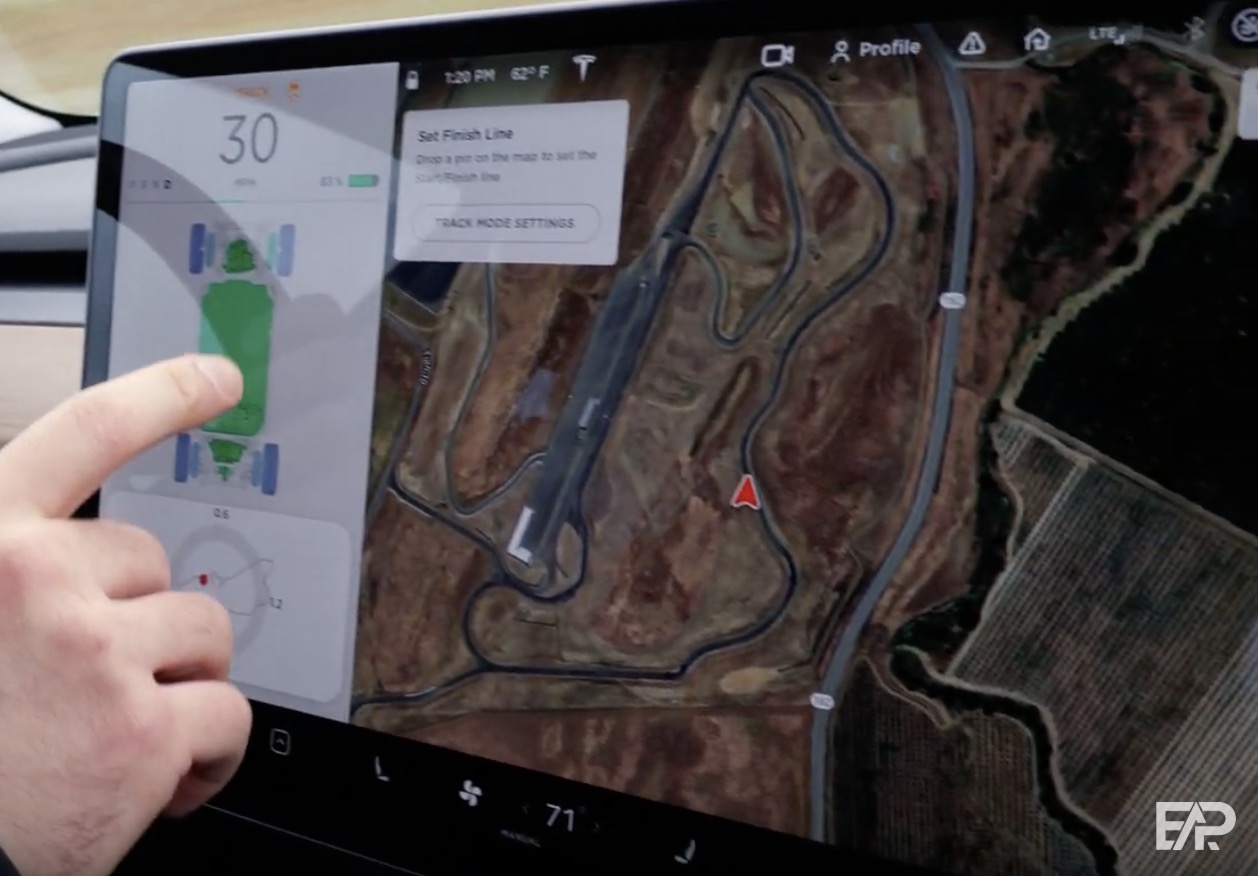 The new software update should be pushed to all Model 3 Performance vehicles.

For the Bluetooth improvements, Green shared the release notes he found in the code:

To improve the audio transition from phone-to-car when entering your vehicle, Bluetooth now connects to your paired phone only after you are sitting in the driver’s seat and all doors are closed. As a reminder, you can pair your phone to Bluetooth by touching the Bluetooth icon on the top of your touchscreen and then ‘Add New Device.’

This is actually a feature that was suggested to Elon Musk on Twitter in order to avoid having your phone connect to your car while you’re around it but not in it.

This update is a simple one that should facilitate the use of a different storage device for your dashcam/Sentry mode storage.

In order for Sentry Mode and Dashcam to work on a Tesla, you need a few accessories. We recommend Jeda’s Model 3 USB hub to be able to still use the other plugs and hide your Sentry Mode drive. For the drive, I’m now using a Samsung portable SSD, which should now be more easily compatible and it gives you a ton of capacity, and it can be easily hidden in the Jeda hub.

Not much is known about the other features, but we are expecting to know more as the update reaches more vehicles in the fleet and we see release notes for different models. Stay tuned.