One of the questions I get most often is, When am I going to be able to afford an electric car? That’s a complex question, but I think it’s important for people to know that they can buy an electric car today for less than $10,000.

An important thing to keep in mind is that most people don’t buy new cars. In 2018, 17 million new passenger cars were sold in the US versus 40 million used cars. So regardless of whether it’s electric or not, most people can’t afford new cars.

New electric cars will go down in price over the next few years, but the real thing that will make electric cars truly affordable for the masses is a mature used electric car market.

Unfortunately, I believe we are about five to 10 years away from a truly mature used electric car market as we need more mass-produced electric car models to populate it.

They are not many options, and inventory is rare in some markets, but the truth is that you can get a used electric car for less than $10,000 today.

They might not be the best cars out there, but are a great option for people looking to stop spending money on gas.

In my experience, there are four used electric cars you can get for less than $10,000: Nissan Leaf, Chevrolet Spark EV, Fiat 500e, and Ford Focus EV.

The Leaf is both one of the oldest and highest-volume electric cars ever, which results in a decent used car market.

Those electric cars will generally have closer to 50,000 miles on the odometer, and they rarely list the battery degradation on their listing. You should always ask the seller.

If you are willing to pay a little more, between $7,000 to $10,000, you have a lot more choices, and they are also available in a bunch of different markets in the US. You’ll find plenty of cars that still get over 100 miles of range.

You can check with CarsDirect and reach out to local dealers to see their inventory of used Nissan Leaf electric cars.

For the Spark EV, a discontinued electric car from GM, you are going to have a harder time finding inventory in some markets. 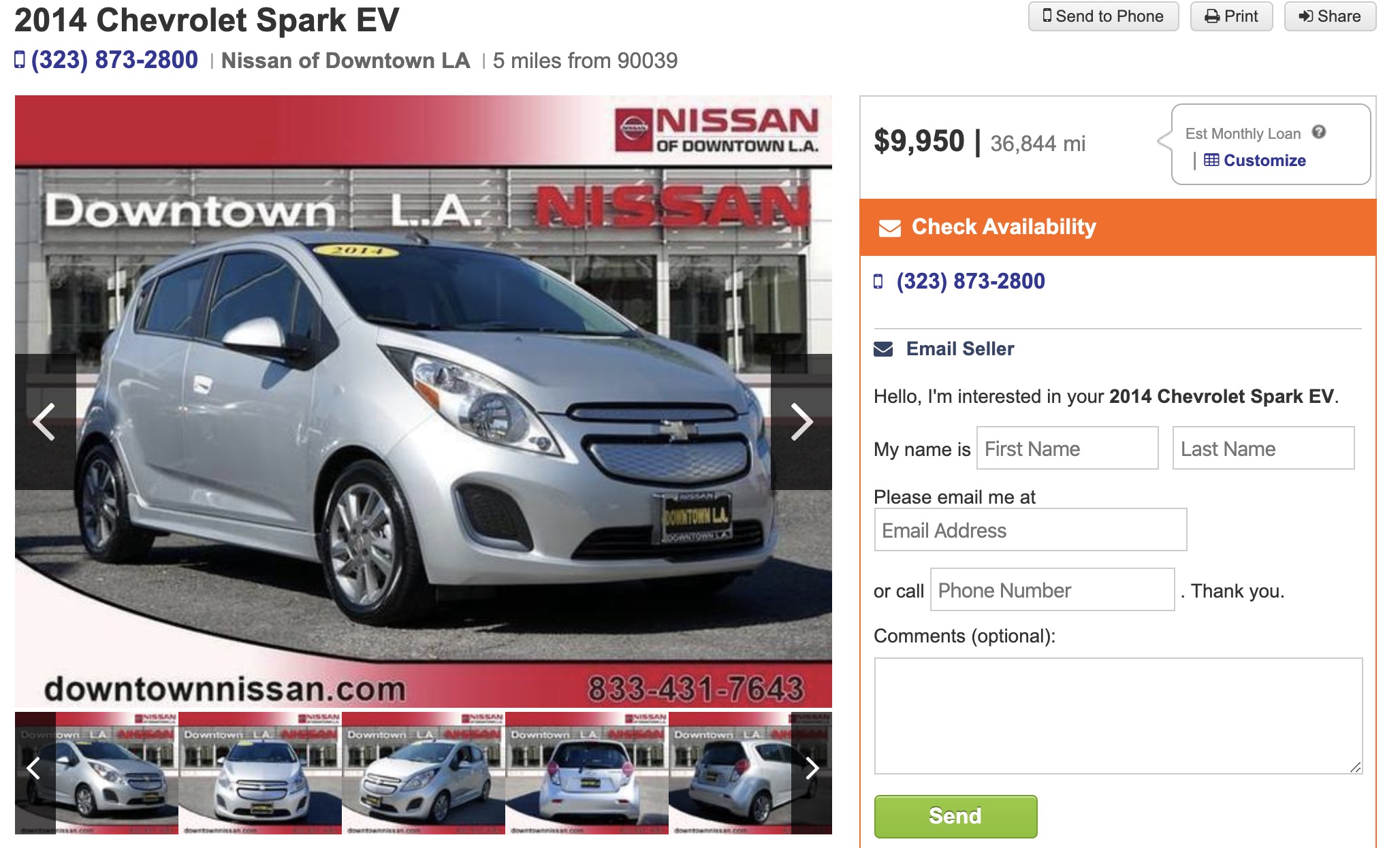 Personally, I am not a fan of this option because you are going to have a hard time getting more than 80 miles on a single charge out of this car.

The good news is that because of its short range, most used Chevy Spark EVs are not going to have high mileage.

If you have a relatively short commute and a way to charge at home every night, it could still be a good option.

You can check with CarsDirect and reach out to local dealers to see their inventory of used Chevy Spark EV electric cars.

The Fiat 500e market is very similar to the Spark EV, but you should be able to find more inventory, especially in California. 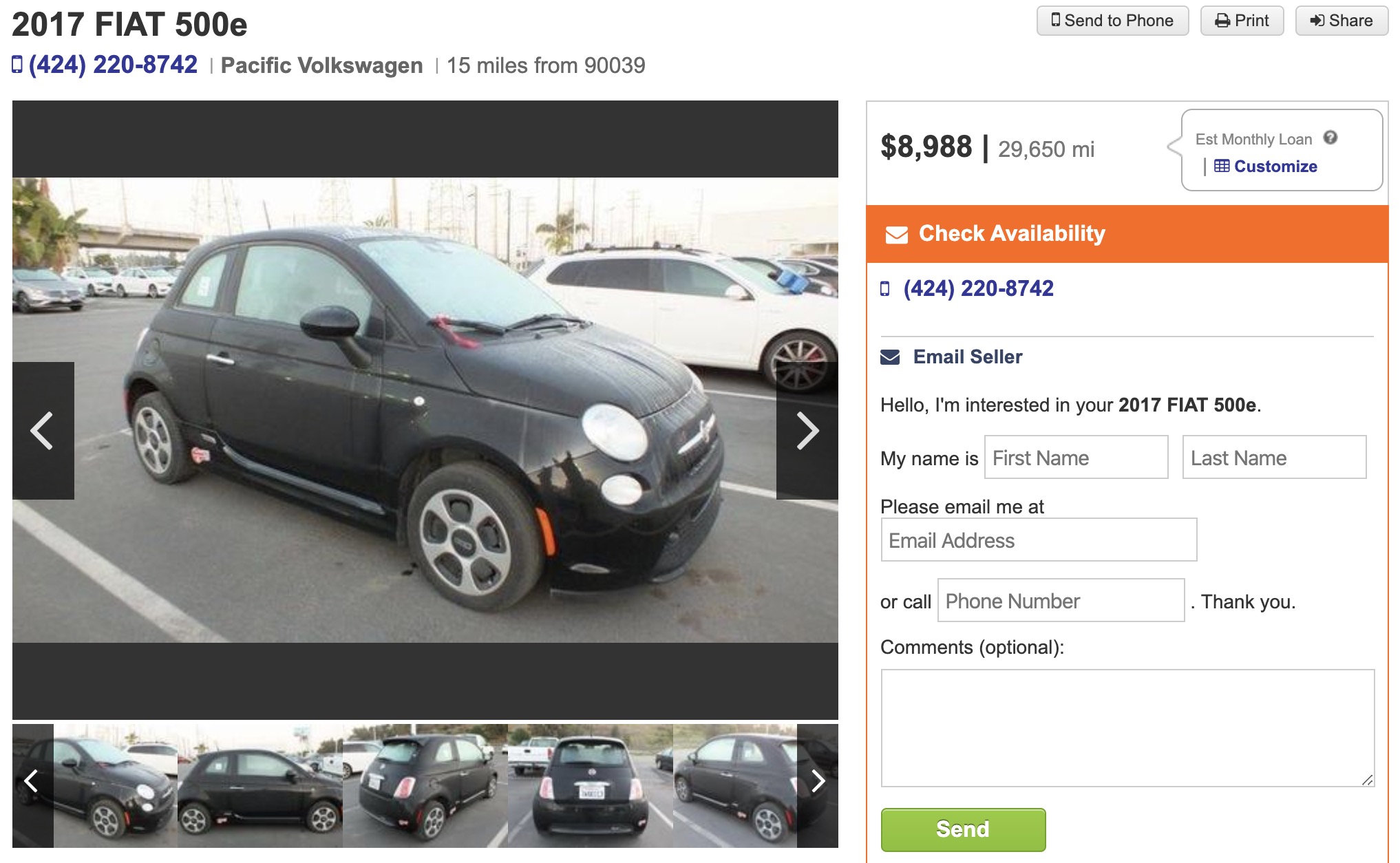 You’ll get similar performance as the Spark EV, but in a slightly cooler package, in my opinion.

For less than $9,000, you will find several relatively low-mileage options in good condition.

You can check with CarsDirect and reach out to local dealers to see their inventory of used Fiat 500e electric cars.

This one is probably the most surprising for a lot of people, but the Ford Focus Electric used prices have actually come down a lot. 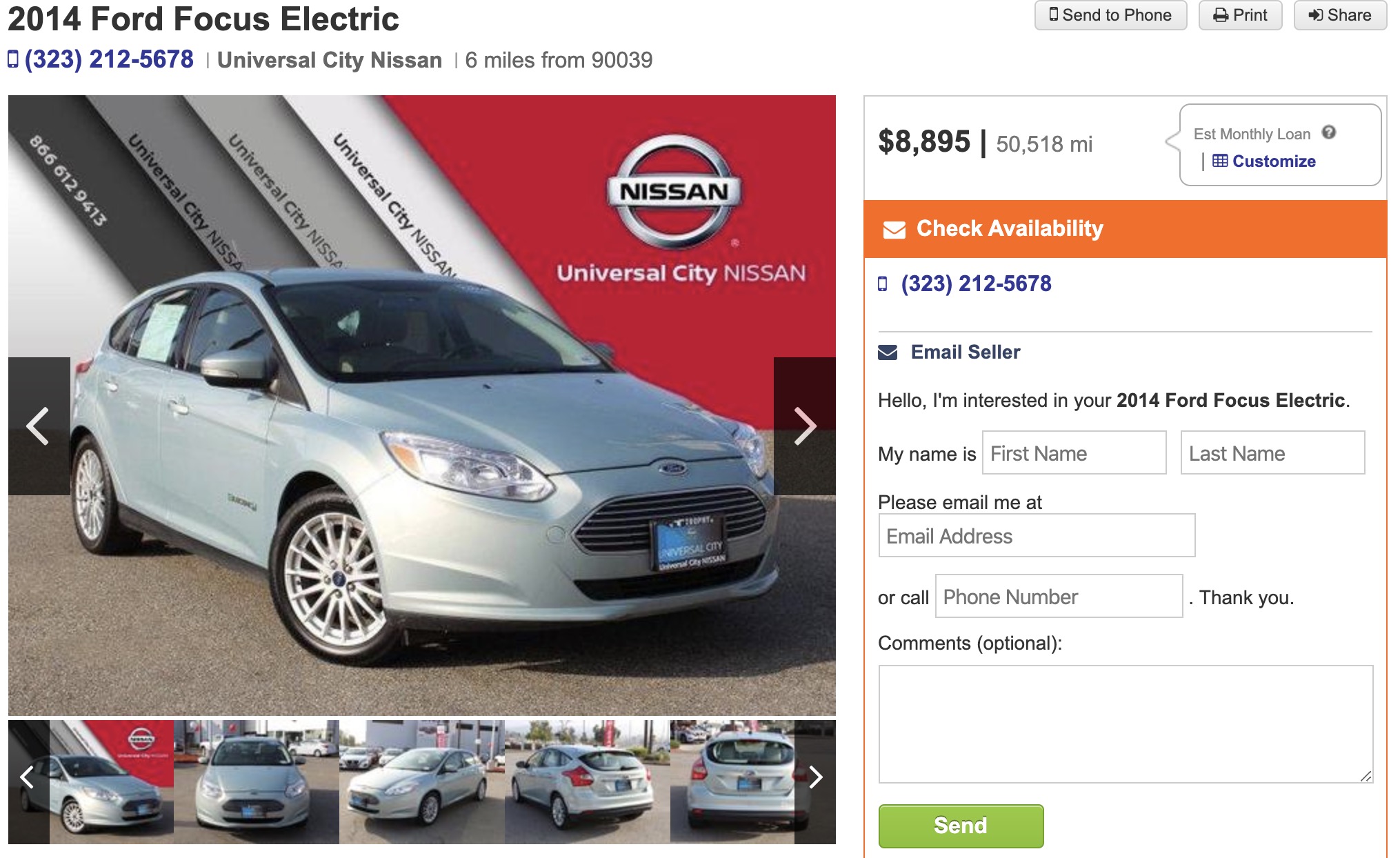 Again, you won’t be able to get much more than 70 miles of range out of that car, but it’s a much bigger vehicle than the two previously mentioned.

You can check with CarsDirect and reach out to local dealers to see their inventory of used Ford Focus Electric electric cars.

Let’s be honest, these are not great cars. You won’t be able to go on long road trips with them, but they will get your commute off fossil fuels for a relatively cheap price, and that’s what is really important.

They also shouldn’t lose too much value if you take care of them.

If you are looking at ways to reduce your fuel cost, they might be good options, and hopefully I’ll be able to write this post again in two to three years with at least twice as many vehicles on this list.