Tesla has started asking some Model Y buyers to change their configuration in order to get their car delivery sooner — hinting at production volume being higher than the current demand for the configuration going into production.

As we reported earlier this week, Tesla is starting to confirm Model Y deliveries to customers for next month after starting low-volume production in January.

The automaker has been contacting people who ordered a Model Y Performance and Model Y Long Range AWD with a five-seater configuration all over the US to confirm delivery for the second half of March.

Those are the first two versions of the car going into production.

Now we learn that Tesla is also reaching out to people who ordered those vehicles with a third-row seat, and suggesting that they can change the configuration to a five-seater in order to get delivery next month.

Tesla wrote in an email to customers obtained by Electrek:

If you’d like to take delivery of your Model Y next month, you can adjust your order to the standard five-seat interior, removing the $3,000 seven-seat interior upgrade cost. Contact a Tesla adviser to update your order today.

The automaker says that the seven-seater Model Y configuration is not going into production until next year.

Here’s the email in full from Tesla: 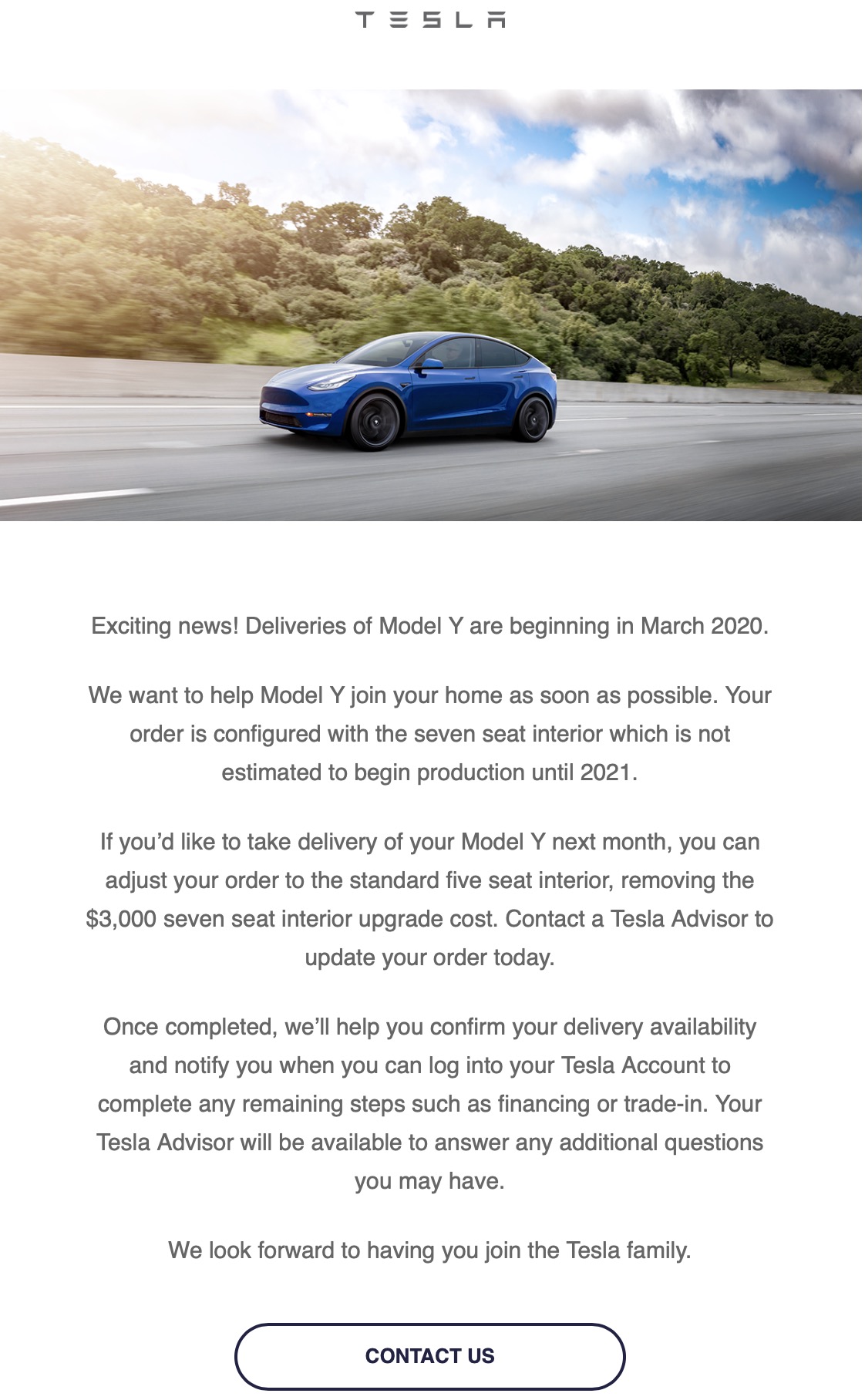 Tesla confirmed during their earnings results last month that they already started the production ramp at the Fremont, California, factory:

CEO Elon Musk previously said that Tesla was aiming to bring Model Y production at the Fremont factory to 1,000 units per week by the summer.

Tesla never confirmed the number of pre-orders it received for the Model Y since launching the vehicle last year.

This is an interesting piece of information. Tesla started sending out the first emails just over a day ago.

It means that from the feedback they got on confirming orders from Performance and AWD reservation holders with a five-seat configuration, they don’t expect to have enough confirmed orders for the volume they can deliver in March.

They need to convince some seven-seater people to convert to five-seater.

It would indicate that Tesla is planning to have more production volume next month than they have demand for the Performance and AWD five-seater.

I am not sure if it means that Tesla is going to have much higher volume than expected, or if the demand for those configurations in the US is lower than we anticipated, but it is an interesting development.

Either way, I expect demand for Model Y to pick up with deliveries since Tesla has great word-of-mouth marketing, and that works a lot better when customers have the vehicle in hand.