EGEB: Local areas are buying electricity in bulk for residents 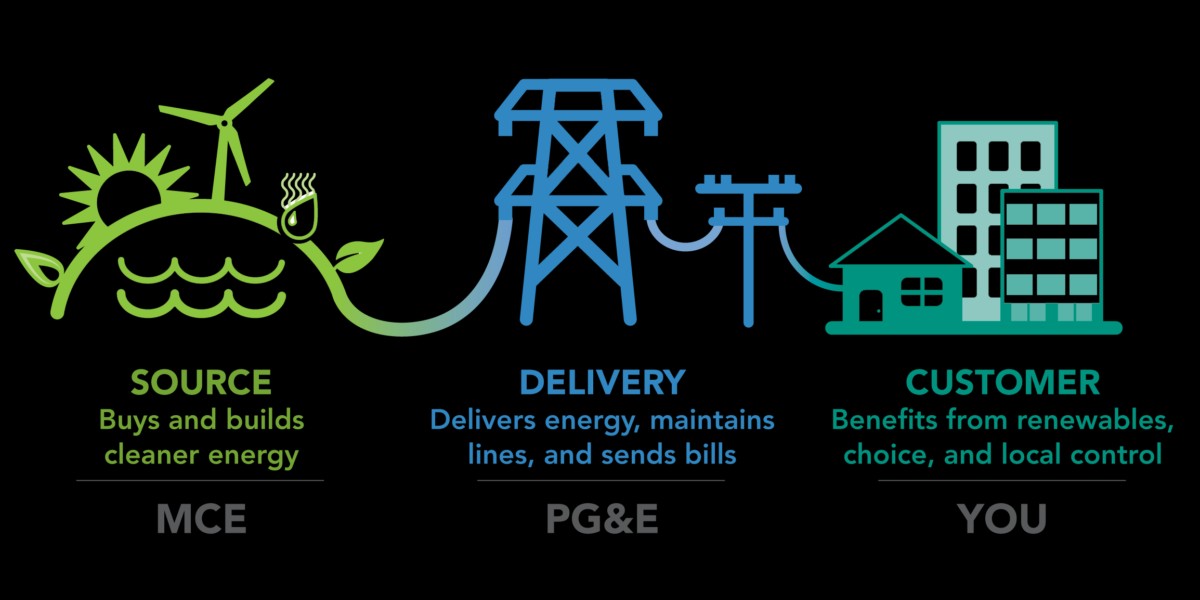 Community choice aggregation (CCA) is when governments have the right to buy electricity in bulk on behalf of their residents, enabling them to focus on buying more green energy and lowering costs. The utility companies continue to manage transmission.

Community choice programs often provide the same or lower rates, so few people opt-out. John Farrell of the Institute for Local Self-Reliance says usually fewer than 10% of customers do, according to Yale Climate Connections.

And a secondary thing that is happening in most of the places where these programs are running is the purchase of more renewable energy.

According to the EPA:

CCAs are an attractive option for communities that want more local control over their electricity sources, more green power than is offered by the default utility, and/or lower electricity prices.

Many California (pictured above, with MCE and PG&E) and New York programs offer customers the opportunity to buy 100% green electricity.

On February 17, New England Public Radio wrote about four municipalities in Connecticut who have passed resolutions in support of CCAs, but they need authority from state lawmakers.

Michael Harris, energy coordinator for the municipality of Middletown, said:

The utilities have a corporate stranglehold on energy policy in the state of Connecticut. We are behind New York and Massachusetts in implementing clean energy and progressive policies, policies that could cause the utilities to lose some of their control.

Ever seen the sea of plastic cups strewn all over the road after a marathon? Sustainable packaging startup Notpla has a fantastic solution to eliminating that waste: edible beverage pods.

The pods were used at the London Marathon last year, filled with Lucozade, and will be used again this year on March 1. You just bite the corner off to drink the beverage inside, and if you want to eat the pod, it’s tasteless.

The beverage pods are made of brown seaweed and plants, and if people decide not to eat them, they’ll biodegrade in about six weeks. They’re great for replacing plastic cups at sporting events, it’s a fun way to consume cocktails (forget those jelly shots!), and could replace plastic condiment packets that are so casually thrown by the handful into takeout bags of fast food. Further, Notpla is developing a water- and grease-proof cardboard takeaway box that is biodegradable and repulpable.

The designers used a technique from molecular gastronomy to create the package — if you dip a sphere of ice in a mixture of calcium chloride and brown algae extract, an edible membrane forms around the ice, holding everything in place as the ice melts back to room temperature. A small version of the package is designed to break open inside your mouth.

So it’s not going to solve the single-use plastic problem overall, but it’s a great step to eliminate plastic in certain situations.

Advocate for fossil fuels as EPA chief of staff

Mandy Gunasekara, who was previously the Environmental Protection Agency’s (EPA) top air-policy adviser, left the EPA to start the Jackson, Mississippi-based Energy 45. As her website states, the agenda is really quite simple: “Energy45 is here to defend the Trump Energy Agenda in Mississippi.”

Now Ryan Jackson, the EPA’s chief of staff, is stepping down on February 21 to work as the top lobbyist for the National Mining Association (yes, really), and Gunasekara is tipped to replace him.

According to the Washington Post, Sierra Club spokesman Adam Beitman said of this possible new role for Gunasekara:

Now that Gunasekara’s efforts to try and greenhouse gaslight the country into believing that Trump is an environmentalist have failed, we’re not surprised she opted to rejoin Andrew Wheeler in attempting to roll back as many clean air, clean water, and climate protections as possible.

Before she left the EPA, Gunasekara also urged Trump to leave the Paris Agreement. (She states that on her website, too.)

Electrek’s Take: Gunasekara’s take on the environment is extremely ill-informed and not grounded in scientific fact at all. We agree with the Sierra Club that she will do nothing but further roll back more environmental and climate protections. The whole world knows fossil fuels need to be eliminated — from large corporations to banks — due to the incredible damage they do to the environment, and the now many other viable options available. So how could a potential top EPA staffer not know or agree with this?