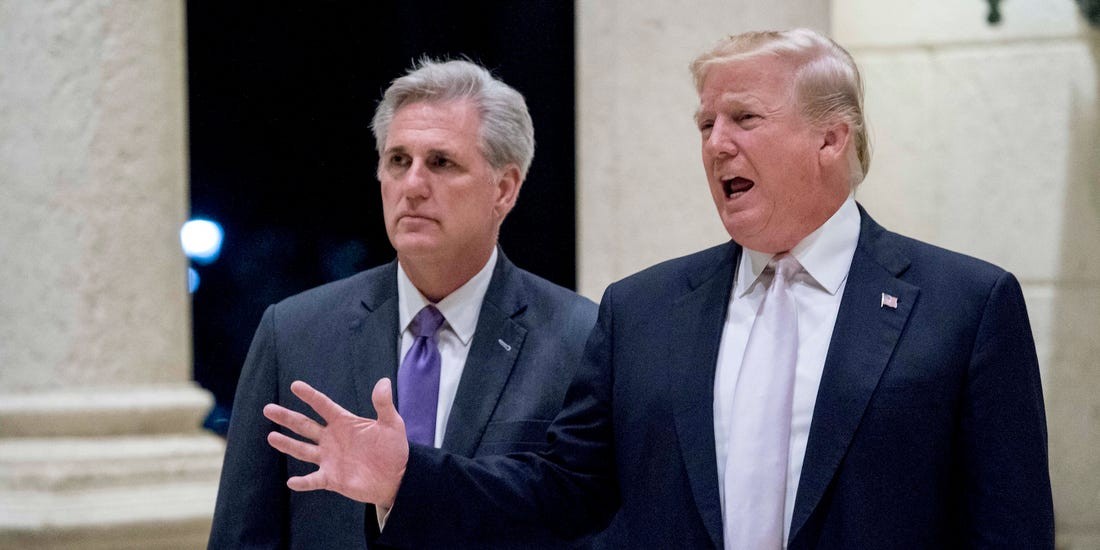 US House Minority Leader Kevin McCarthy (R-CA) (pictured, with Donald Trump) and House Energy and Commerce Committee Republican Greg Walden (R-OR) introduced climate-change legislative proposals today in an attempt to shift the Republican party’s message on climate change from nothing to something.

The Republicans said they will introduce additional legislation in the near future dealing with clean energy and conservation.

Bruce Westerman (R-AK)’s tree-planting bill would see the US plant some 3.3 billion trees each year over the next 30 years. Donald Trump backs this bill.

David Schweikert (R-AZ) and Brad Wenstrup (R-OH) introduced a bill that would cancel the 2024 sunset date for 45Q carbon capture tax credit eligibility and allow more projects to be able to claim the incentive. Carbon capture is a natural or artificial process by which CO2 is removed from the atmosphere and held in solid or liquid form.

Dan Crenshaw (R-TX) is leading a bill on carbon capture research and development.

The Republicans propose no targets — either with dates or quantities — for reducing emissions.

And yet, despite McCarthy’s endorsement, E&E News reports that a senior Republican aide said:

This plan may have the support of the individuals in the room, including the leader, but it’s not something that has earned the support of the broader conference, and a number of members have concerns about some of the pieces of legislation in the package.

The Republican Party is discovering that the general public  — even Republicans themselves — actually cares about climate change, and that’s a serious conundrum for the party of climate-change denial and fossil-fuel supporters, led by a president who hates wind turbines.

According to Mother Jones:

The American Conservation Coalition, a group representing younger conservatives, has done its own polling of 1,000 voters nationwide under age 35 — 77% of whom said climate change was important to them and that they want to see more solutions from their party.

As I asked about Donald Trump’s State of the Union speech just four days ago — which words are missing from today’s announcement?

And it’s no accident that Trump has budgeted for Everglades conservation in Florida — it’s a purple state, and this is an election year. (44% of Republican Floridians are concerned about climate change.)

What the House Republicans are proposing instead are tax credits for the fossil-fuel industry — more tax credits. So that is an active endorsement of continuing to support fossil fuels.

Essentially, they’re saying: “OK, we begrudgingly admit you’re polluting the Earth and driving us toward climate change, but keep doing what you’re doing and just figure out a way to stash your mess. Here’s some money.”

If you make a mess, you should clean it up. Why would you pay polluters to clean up their own mess? They should pay for it themselves.

As for the trees, here’s what Center for American Progress senior policy analyst Ryan Richards had to say, according to Mother Jones:

The same man who is proposing to cut down the Tongass National Forest [in Alaska] wants to plant a trillion trees. He can’t have it both ways.