EGEB: This battery-hybrid-electric catamaran is sailing in the Arctic Circle 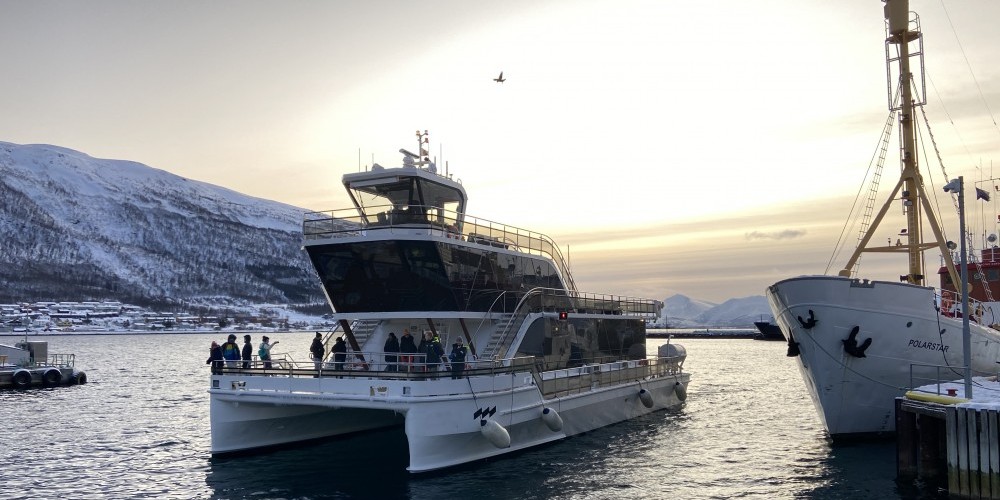 This summer, the Brim will sail the Lofoten archipelago, which is known for its dramatic scenery.

And Brim Explorer’s ship the Bard, which is currently under construction, will launch this spring and bring tourists to Svalbard on daily excursions this summer, in partnership with Hurtigruten. Svalbard is a remote archipelago between Norway and the North Pole, known for its wildlife, glaciers, and the Midnight Sun — ideal for solar power during the summer. That’s handy because Brim Explorer aims to charge the batteries in port from a new pilot solar power plant.

The ships, which are built out of recycled and recyclable aluminum, can operate on batteries for 10 hours with a cruising speed of 10 knots.

We have some 800kWh of batteries on board, equaling to about 10 Tesla car battery packages.

By combining wave-breaking and green technology, clean Nordic design, and focus on sustainable travel, we have created the first sightseeing vessel in the world able to operate a full day on electric power, and we look forward to using our knowledge to move the travel industry in a greener direction together with Hurtigruten at Svalbard.

Schneider Electric, a French multinational corporation specializing in energy and automation digital solutions with more than 150,000 employees, announced today that it will replace its entire 14,000-car fleet with EVs in more than 50 countries by 2030. It will install EV charging infrastructure in its major offices and factories by 2030.

Schneider Electric has joined The Climate Group’s EV100, “a global initiative bringing together forward-looking companies committed to accelerating the transition to electric vehicles (EVs) and making electric transport the new normal by 2030.”

Further, the company announced last September that it is bringing its carbon neutrality goal forward by five years to 2025, and committing to net-zero in operational scope by 2030.

Global CO2 emissions need to be cut by 45% by 2030 to limit climate change to 1.5°C globally, according to an Intergovernmental Panel on Climate Change (IPCC) report.

From ICE to EV in the UK

British prime minister Boris Johnson announced that a ban in the UK on selling diesel and petrol cars would be brought forward from 2040 to 2035 at a launch event for the November UN climate summit (COP26) in Glasgow. The new ban now includes hybrid and plug-in vehicles.

The British government’s decision was in response to experts who said 2040 is too late for the ban if the UK wants to achieve its target of becoming net zero by 2050.

Consumers will only be able to buy electric or hydrogen cars and vans. About one-third of UK emissions are created by transport.

The government will also need to tackle the emissions coming from energy generation. These are almost as high as from transport and come from things such as industry and people’s homes.

The UK currently has 11,000 EV charging stations and is rapidly working to install more, as we reported yesterday about Northern Powergrid’s new incentive to install EV charging point locations.

However — and this is a big however — the BBC says:

You will still be able to buy a second-hand petrol or diesel car in 2035 and drive one you currently own.

There could even be a boom in petrol or diesel sales in 2034, as motorists prepare to buy combustion engines for the final time.