This is how Sanders responded to Biden’s assertion:

.@BernieSanders responds: "My good friend Joe Biden has recently said, and I quote, "not a single, solitary scientist" endquote agrees with my plan. well Joe, you're wrong. Many leading scientists agree with our plan. " https://t.co/RIMk5bhTKU pic.twitter.com/7VoBsrQ4S3

On Tuesday, January 28, 57 scientists collectively signed and addressed a letter [via Common Dreams] to Sanders that contradicted Biden, stating the following:

The top scientific body on climate change, the United Nations Intergovernmental Panel on Climate Change (IPCC), tells us we must act immediately to bring the world together to stop the catastrophic impacts of climate change. The Green New Deal you are proposing is not only possible, but it must be done if we want to save the planet for ourselves, our children, grandchildren, and future generations. Not only does your Green New Deal follow the IPCC’s timeline for action, but the solutions you are proposing to solve our climate crisis are realistic, necessary, and backed by science. We must protect the air we breathe, the water we drink, and the planet we call home.

Geoffrey Supran, a research associate in the Department of the History of Science at Harvard University, tweeted in response to Biden’s assertion:

Joe Biden says "There's not a single solitary scientist that thinks [the #GND] can work."

In a letter today to @BernieSanders, I – & 56 other scientists – disagree. Scholarship is clear: we have most tech, what we lack most is political will. Mr Biden's comment embodies that. https://t.co/ukLuFH9aMM pic.twitter.com/8ywmGuz6WL

Greenpeace ranked the 2020 presidential candidates on climate change. Bernie Sanders was given an A+, and Joe Biden was given a B+. Donald Trump got an F. You can see the rankings and reasons behind them here.

Endurance swimmer and UN patron of the oceans Lewis Pugh swam beneath the Antarctic ice sheet to show the changes that the climate crisis is causing.

Pugh was the first person to complete a long-distance swim in every ocean of the world. When he swam in the 32F Antarctic waters, he wore only a swim cap, goggles, and a Speedo.

Pugh reported what he saw under a freezing ice sheet [via Now This]:

The water had risen in that tunnel and as I went in, I realized it was not possible to swim-crawl because you’re turning and turning around all these corners and it’s very, very narrow. The ice can suddenly crack and the river can drain down a moulin at a terrifying speed to the bedrock hundreds of meters below. That meltwater then lubricates the bedrock, which causes the ice sheet to become unstable; huge chunks then break loose and slide into the sea.

Check out his Antarctic swimming experience here, and further explanation of why we need an urgent response to the climate emergency:

PBS News Hour’s science correspondent Miles O’Brien reported on Australia’s efforts to rescue animals, why it will take so long for the country’s ecosystems to recover, and the role of climate change in the bushfires. It’s an excellent account of the bushfires’ devastating impact on wildlife. Have a watch below:

Mexico City banned single-use plastic bags entirely this month. The sale or distribution of the bags, from big stores to corner shops, is now prohibited.

Fines for distributing them are steep, starting at 42,000 pesos ($2,219). According to Reuters, Gabriel Sanchez, who hawks produce at a marketplace, said the ban was a return to 1960s packaging:

Now we’re going back to paper bags, sacks, baskets. I think it will take a while but people will get used to it.

As of 2015, Mexico City’s population was 8.855 million. The metropolitan area’s population is more than 20 million, and that population used around 68,000 tons of bags a year.

Humanity managed to carry stuff for thousands of years without single-use plastic bags. We could all adapt.

The Yale Program on Climate Change Communication reports that “global warming is the 11th most highly ranked issue registered [American] voters say will be ‘very important’ to their vote in the 2020 presidential election, with 45% saying it is very important.”

Here’s how global warming ranks in importance of issues by party when voters were asked what would be a “very important” issue:

Further, when asked what the “most important issue” is when voting for a candidate, here’s how it broke down:

This video is from April 2019, and it’s still consistent with the above results and absolutely worth watching:

For the first time in the World Economic Forum’s Global Risks Reports’s history, all the top risks are environmental in 2020.

You can read the full report and the executive summary here, and also watch the video below that identifies the 5 biggest global risks in 2020. It doesn’t make for easy reading or watching, but it’s important that we all stay informed so that we can take steps to address this problem. 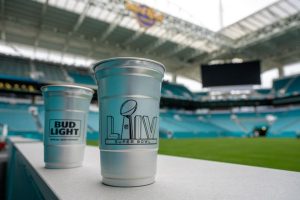 The company claims that using reusable containers instead of the traditional one-time use containers could potentially eliminate the need for the up to half a million plastic cups that would normally be used at a traditional Super Bowl. After the game, aluminum cups will continue to be used during regular season Miami Dolphins games, the regular tenant of Hard Rock Stadium, as part of a wide-ranging initiative to phase out 99.4% of single-use plastics throughout the stadium operation by the end of 2020.

Hard Rock Stadium is the first professional sports stadium to move away from plastic cups. May all the others soon follow. That’s a lot of plastic cups.