Europe and US clash over climate change at Davos 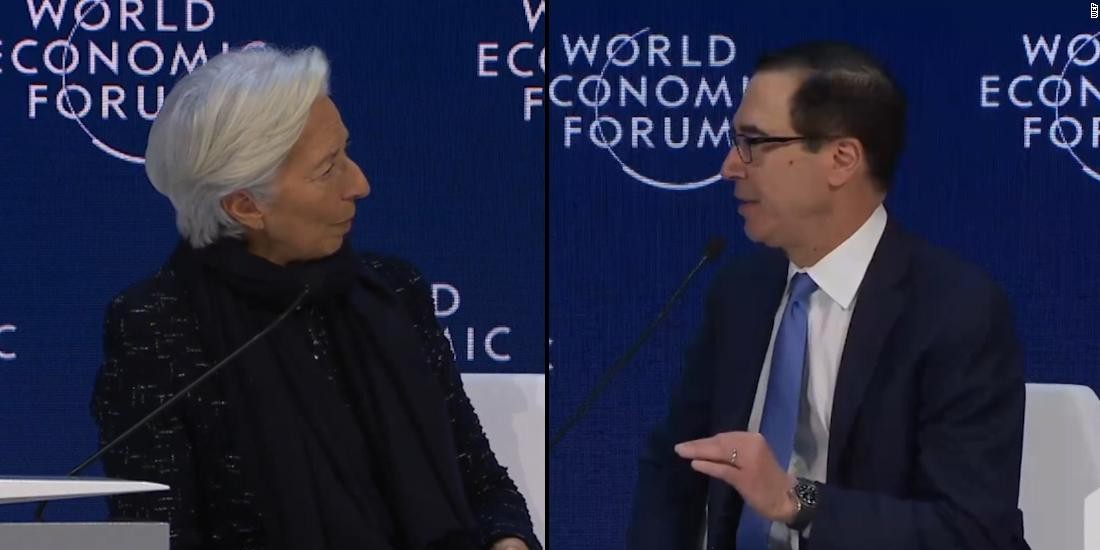 The US and Europe clashed over the climate crisis at Davos on Friday, with US treasury secretary Steven Mnuchin saying during the summit’s final panel, “Let’s call it an environmental issue and not climate change.”

This was in response to Christine Lagarde, president of the European Central Bank, saying it was of utmost importance to include climate risk in economic forecasts.

On Friday, the Global Economic Outlook panel took place, which sought to explore the question, “What fiscal and monetary measures are necessary to mitigate an economic downturn in 2020?”

Reassessing geopolitical risks, the impact of climate change, and prioritizing inclusive growth were all on the agenda.

Lagarde said the financial sector would need to move away from quarterly and medium-term forecasts and start thinking up to three decades ahead.

Christine, I think you can have a lot of people and model it, but I just don’t want to kid ourselves. I think there is no way we can possibly model what these risks are over the next 30 years with a level of certainty, given what I think is the changes in technology along the way.

(Notably, we did model these risks not just 30 years ago, but 50 years ago.  Those models were accurate.)

If we can push companies into the direction of actually anticipating the transition, pricing it, and making sure that they move to cleaner and cleaner energy uses, then it helps.

We don’t know how to price these risks and so we are overestimating the costs. If you want to put taxes on people, go ahead and put a carbon tax. That is a tax on hardworking people.

(Notably, economists at the IMF have looked into this and found that a carbon price would in fact boost the global economy by up to 2%, which means that it would benefit hardworking people.)

Mnuchin once again downplayed the financial impact of climate change. He said:

Environmental issues have an impact on the economy, but it is one of many important issues.

As for the rest of the panel, Scholz said that Germany was working to reduce the use of carbon, and Georgieva said, “We need to think of policies that are good for the economy, good for the environment, and good for people.”

Mnuchin stood out like a sore thumb on this panel. He points fingers at India and China (notably, both countries have emitted far less carbon on a historical basis, both currently emit less per capita, and India emits about half as much as the US despite 4x the population), yet still refuses to even use the words “climate change.”

The panel was in agreement about the need to urgently prioritize addressing climate change — except for Mnuchin. Lagarde rightly pointed out that BlackRock, the world’s largest investment manager, was moving to sustainable investment. (Electrek reported on this on January 16.)

If we put it in economic terms, since that was the premise of this WEF panel, corporations and financial institutions are now acting to address the impact of climate on their financials. The European Investment Bank will stop funding fossil fuels by the end of next year. Mark Carney, the former Bank of England governor, said firms who ignore climate change will go bankrupt. McKinsey & Company has just released a report on the socioeconomic impact of climate change, and it’s dire. Goldman Sachs’ CEO called for a price on the cost of carbon in December. Microsoft and Starbucks are making big changes. The Corporate Electric Vehicle Alliance has just launched, which has members like DHL and Amazon and Ikea.

Do those sound like lefty socialist people and organizations to you?

Mnuchin, and indeed, the entire Trump administration, is fiddling while Rome is burning. Climate change is just one of many issues, but it’s the most important issue. Money and jobs won’t save our children and grandchildren from an unliveable planet, Mnuchin. Listen to the scientists — Greta Thunberg does, and she’s 17. And she hasn’t been to college yet.