Damon Motorcycles has developed some impressive technology in its first electric motorcycle, the Damon Hypersport. And now we’re learning that the bike’s innovations might make their way into other brand’s upcoming electric motorcycles, including Japanese sport bikes.

The Hypersport is the first electric motorcycle developed by Vancouver, Canada-based Damon Motorcycles.

We’ve previously covered some of the unique technology included in the Damon Hypersport, which is designed to make motorcycles safer and more comfortable.

Over the past three years, Damon has worked to develop a suite of advanced safety features called CoPilot. The system employs a series of sensors including radar, multiple cameras, non-visual sensors, and AI to simultaneously track the speed and direction of dozens of moving objects in the vicinity of the bike. CoPilot employs a patent-pending combination of haptic feedback vibrations in the handlebars and LED warning lights on the edges of the windscreen to provide riders with collision warning alerts. It can monitor 360 degrees around the bike, effectively creating a bird’s eye view of threats.

Importantly, the system is designed to feel as intuitive as possible to the rider so that it increases the rider’s awareness without requiring an additional focus point.

Other innovations in the Damon Hypersport include the Shift system, which allows the motorcycle to morph its geometry to fit different riding styles.

Traditional motorcycles have forced riders to choose a single geometry for a bike, such as an aggressively forward-tucked sport bike or an upright cruiser bike. While each bike design has its unique advantages, the various designs also have their own drawbacks. As Damon’s CEO Jay Giraud explained to Electrek:

Instead of locking riders into a single bike design, the Damon Hypersport electric motorcycle’s Shift system is designed with adjustable geometry that can change and adapt to riding conditions on the fly. Riders can literally just push a button to set in motion the bike’s windscreen, seat, foot pegs, and handlebars, all of which will move together to various presets. The options can provide seating positions that range from a quick supersport motorcycle to a sport touring bike to a full upright commuter. It’s the equivalent of owning multiple styles of motorcycles that you can hop between in the middle of a ride.

This technology originally looked destined for just the Hypersport, which Damon has planned to bring to market starting at $24,995 for the base model. However, it now looks like the bike could also be serving as a halo product or tech demonstrator, helping Damon Motorcycles shop its unique innovations around to larger motorcycle manufacturers. 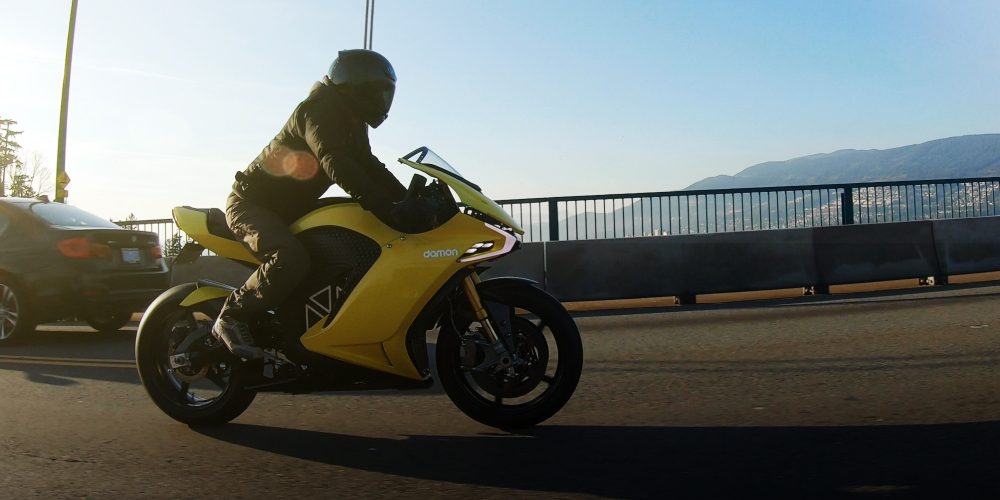 Jay explained to Windburnedeyes that the company is considering the licensing option after demonstrating their technology to representatives from Honda, Suzuki, Yamaha, and Kawasaki:

Collectively, the Big Four represent the vast majority of the large Japanese motorcycle market, though have been slow to adopt electric motorcycles or to demonstrate large-scale efforts at internal development of electric motorcycle drivetrains. Kawasaki has perhaps made the most progress, but the recently released specs for Kawasaki’s electric motorcycle were underwhelming, to say the least.

What do you think? Could a Canadian electric motorcycle help boost Japanese motorcycle manufacturers into the future? Let us know in the comments below.