Tesla Model 3 ‘price bump’ in Canada is still safe for $5000 rebate, but cutting it close

Tesla’s recent Model 3 price increase has put the only version of the popular electric car eligible for the $5,000 electric vehicle rebate in Canada over the price limit, but the rebate is still safe based on the rules.

However, Tesla is starting to cut it close.

Earlier this year, Canada’s federal government launched a new $5,000 incentive at the purchase of new electric vehicles with base prices of less than $45,000 and that cost no more than $55,000 after options.

They describe the price requirement:

a vehicle with six seats or fewer, where the base model (trim) Manufacturer’s Suggested Retail Price (MSRP) is less than $45,000;

Tesla had to be creative with its Model 3 pricing structure in order to make its Model 3 Standard Range Plus eligible for the incentive.

It helped the automaker’s sales in the country.

We reported last week that Tesla increased the price of Model 3’s two least expensive variants in the US.

Many Canadian Electrek readers reached out to point out that the price increase has also affected the Model 3 vehicles for the Canadian market and it pushed the price of the Model 3 Standard Range Plus over the $55,000 limit:

That’s true, but Tesla also changed the way it is displaying the full price of the Model 3.

Tesla still displays the price of the vehicle after incentives, but it also includes a $1,280 destination and documentation fees, as well as other fees: 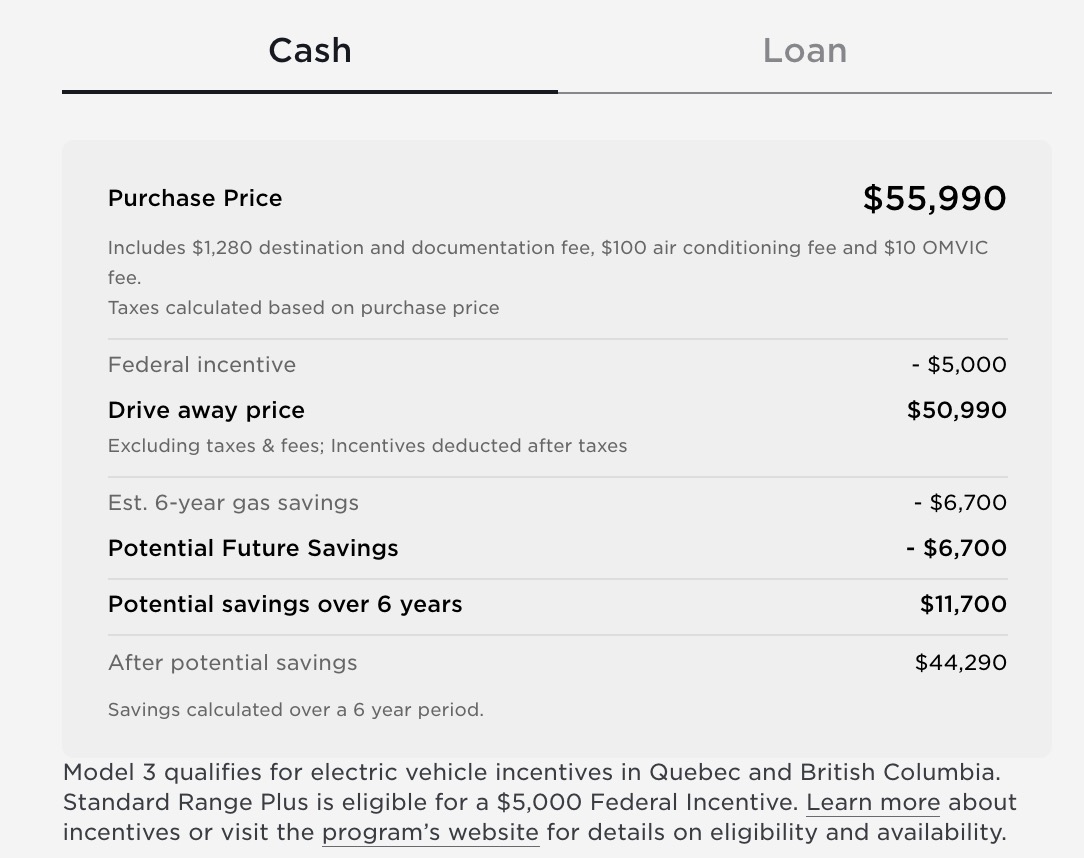 In its rules for eligibility, the federal government says that the destination fee doesn’t count toward the $55,000 limit:

“You will still be eligible for the incentive even if delivery, freight and other fees, such as vehicle colour and add-on accessories, push the actual purchase price over these set limits.”

Therefore, rest assured Canadian Tesla buyers, Model 3 is still eligible to the EV rebate, but Tesla is definitely starting to cut it close.

They are going to have to be careful not to increase the price much more.