EGEB: The most crucial thing countries must do at the UN climate summit

Vinod Thomas, a visiting professor at the Asian Institute of Management in Manila and a former senior vice president at the World Bank, writes for the Brookings Institution about how “the top emitters must commit to a U-turn” at the Conference of the Parties to the United Nations Framework Convention on Climate Change (COP25). Thomas writes:

The single biggest step the big carbon-emitting countries could take is to cut their fossil fuel combustion. Eliminating all subsidies to fossil fuel production and consumption is a part of this agenda.

Renewables still account for just 11% of global energy consumption, compared with 80% for fossil fuels. Solar and wind need to overcome technical and logistical impediments on production, storage, and distribution. To counter this, strong policy support and subsidies — justified on grounds of their positive climate effects — could vastly increase their usage.

Further, outdoor particulate pollution kills around 4.2 million people worldwide annually, according to the Lancet and the World Health Organization (WHO). In the US, 88,000 premature deaths occurred in 2015 as a result of outdoor pollution.

And despite the US being the only country to pull out of the Paris Agreement, the US congressional delegation, made up entirely of Democrats and led by House Speaker Nancy Pelosi, said at COP25 on Monday:

Congress’ commitment to action on the climate crisis is iron-clad. This is a matter of public health, of clean air, of clean water, of our children, of the survival of our economies, of the prosperity of the world, of national security, justice, and equality. We now must deliver deeper cuts in emissions.

Neither Trump nor any senior members of his administration are attending the COP25.

Sustainability: on a (toilet paper) roll 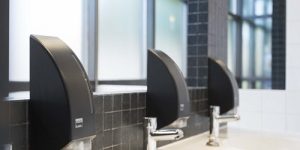 The company was founded by brothers in 1935 and sells toilet paper and other hygienic products on a B2B basis. It was taken over by WEPA in Germany in 2017. It has an annual turnover of approximately $72 million and 200 employees. The company has won numerous awards for sustainability.

Their showcase product line is the Satino Black (left), which is produced from 100% recycled plastic, with matching toilet paper and paper towels from “the most environmentally friendly hygienic paper in the world.”

So how do they do it? Kraaijenbrink lists 5 key points of their success:

Fashion giant Ralph Lauren announced yesterday that it is committing to a series of significant sustainable steps. This includes:

According to Environment + Energy Leader, this is how the company will achieve net zero:

[Ralph Lauren] will pursue a combination of virtual power purchase agreements (VPPAs) in North America as well as assess a select number of US sites for onsite solar power installations. For the remaining electricity use, the company will purchase Green Power Products, including Renewable Energy Certificates (RECs), Guarantees of Origin (GoOs), and International Renewable Energy Credits (I-RECs).