Canada’s Ontario province makes for a fascinating case study of EV adoption. On one hand, Ontario’s center-right government in July 2018 killed an EV rebate of up to $14,000 — and electric-car sales plummeted by 50%. The situation went postal in November 2018 when 12 EV charging stations were ripped out from a Toronto train station. Critics said the chargers were expensive and had low utilization. And then, last Thursday, EV-driving parliament members spoke up loud and clear in a debate over ICE-ing.

The heated discussion was about “Bill 123, Reserved Parking for Electric Vehicle Charging Act, 2019,” which as introduced in June 2019. It declared the following:

The bill was proposed by MPP Paul Calandra (above). He was soon after promoted to government house leader, so MPP colleagues Lorne Coe and Mike Schreiner took up the cause.

Coe kicked off the discussion:

Current electric vehicle owners have found it incredibly frustrating to arrive at a high-speed charging station only to discover a vehicle parked in that charging space — a vehicle not connected to the charger. These stations are often located close to mall entrances, and people, whether driving gasoline, electric, or hybrid vehicles, park in those spots for convenience, not for charging. There’s a tremendous disruption for electric vehicle users requiring a charge. This is not how the spaces were intended to be used. Bill 123, if passed, will provide a fine of $125 for any vehicle parked in one of those spots, should the vehicle not be connected to the provided charger.

Schreiner, a member of the Green Party of Ontario, added:

I have an electric vehicle, and I travel between Guelph and Toronto to Queen’s Park. I have a regular spot I stop in to charge. Just last week, when I stopped there, there was a gentleman who pulled in right after me and all the spots were full — a number of those spots by non-electric vehicles. He said to me, ‘Somebody has got to do something about this problem. This happens to me all the time. I’m sick and tired of it.’ I looked at him and I said, ‘Sir, I will get on that right away.’ He said, ‘Who are you, by the way?’ I said, ‘Well, I’m the MPP for Guelph, and we’ll be debating this very issue next week in the Legislature.’

Schreiner explained that EVs have become more affordable, and that his total cost of operation is about one-tenth of operating a gas-powered car.

Speaker, we need to dramatically accelerate the transition to electric vehicles in Ontario. We need government supports behind that. Fines for people who block charging stations are simply not enough. We have to do better. This needs public money, this needs infrastructure spending, this needs everything thrown at it, and this bill will do nothing to help that.

We face a crisis that is profound, a crisis that threatens our way of life, a crisis that will threaten many people’s lives, and we are in a situation now where we have a government that has been using conspiracy theories in public to talk about how we need to be responding to that crisis. That, Speaker, is a substantial problem. That undermines the credibility of this government.

This government ripped out electric vehicle charging stations from Metrolinx train stations, that it cut the funding to expand ownership of electric vehicles. If we’re going to have an auto industry in this province in the decades to come, we need to be encouraging the purchase of electric vehicles here, so that we have an interest on the part of manufacturers to make them here. Not only are we undermining what we need to do to protect our lives, our children’s lives, our future, and our environment, but we’re undermining our economic prospects for decades and generations to come. No government that engages in that kind of activity should be given cover, ever. 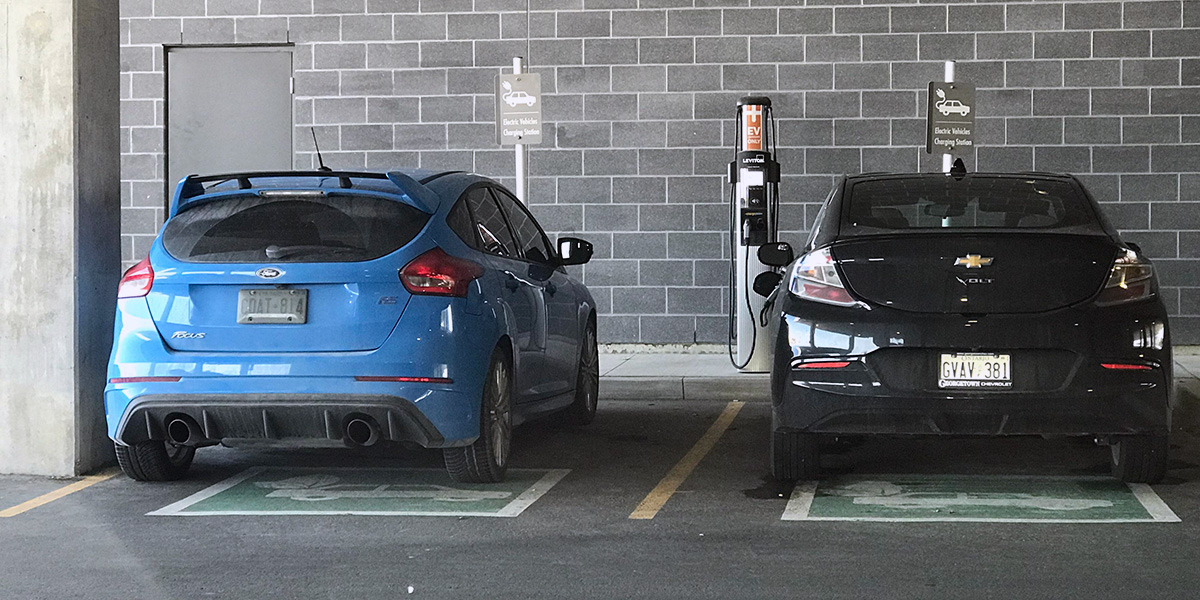 This charging spot in Mississauga was recently ICE’d

MPP Chris Glover summed it up:

It’s finally nice to see the government taking a small, baby step by setting a $125 fine for vehicles that park in electric charging station parking spots when they are not actually charging. I think it’s a small baby step, but it doesn’t make up for all the damage that this government has done.

A couple of weeks ago, I was visiting some friends in Huntsville who have two electric vehicles. I have driven both of them, and those vehicles are as good as or better than any gas-powered vehicle that I have driven in my entire career of driving vehicles. They have lots of pep. For a $5 charge, they can drive 500 kilometers. So you could drive from Toronto to Montreal for five dollars’ worth of electricity, rather than six or seven times that with even a small car.

The Toronto Public Health department reports that every year in Toronto, car and truck pollution leads to 280 premature deaths and 1,090 hospitalizations — every year in Toronto. Greg Evans, a chemical engineering professor at the University of Toronto, reports that one-third of all Canadians live within 250 meters of a major roadway, and living within 250 meters of a major roadway leads to higher rates of cancer and cardiovascular disease, and it leads to adverse effects on birth and child development.

So we absolutely need to make this transition to electric vehicles. The technology is there, and the prices are coming down, but we need to make the change soon.

The bill was “carried on division” and is now “ordered referred to Standing Committee.” See the full transcript of the debate.

The passionate pleas from Ontario political leaders are refreshing. I can’t remember hearing similar debates in the halls of power in the United States. But it needs to happen.

It sucks to be ICE-d out of a charging spot. Of course, in the scheme of things, it’s not a huge issue. But perhaps the high visibility of charging spots can serve to raise awareness and stir much-needed debate.