Greta Thunberg may still be in the Atlantic, sailing from the US to Europe to attend the UN climate emergency talks in Madrid, which will take place from December 2-13. But she still inspired a huge #fridaysforfuture strike yesterday in preparation for those talks.

Thousands and thousands of young people turned out to strike on week 67 of #fridaysforfuture yesterday, Here’s a look at the various demonstrations around the world, via Twitter:

Toronto is asking for a livable world! #FridaysForFuture #ClimateStrike pic.twitter.com/Lwxn8dzULS

What do we want #ClimateAction
When do we want it #Now.@Fridays4FutureU @Fridays4future @GretaThunberg #ClimateStrike pic.twitter.com/x3chtEBCj1

Huge crowds at the #schoolstrike4climate on #springst Melbourne. Sitting in solidarity with bushfire survivors. They're calling on immediate action on climate change from PM @ScottMorrisonMP and Premier @DanielAndrewsMP #ThisIsClimateChange pic.twitter.com/vNRGrCs3aF

And Jane Fonda held her weekly Fire Drill Friday, this time with her grandchildren:

Taking action can be a family affair this holiday season! @Janefonda is joined by her grandchildren Malcolm and Viva and her screen grandchild @IainLoveTheatre! #FireDrillFriday 🔥 pic.twitter.com/VPMpmqeRCH

Remember the game Snake? Watch as empty shopping carts lines grow this #BlackFriday. What once was a childhood game is now an active meditation on the ravages over-consumption.

1.7x of Earth’s yearly biocapacity was used in  2018. That is not sustainable. #BuyNothingDay pic.twitter.com/xRa3I9Q4So

Two weeks before the UK general election, five British political party leaders participated in a televised debate about the climate emergency on Thursday. Prime Minister and Conservative Party leader Boris Johnson did not attend, and neither did Nigel Farage, leader of the Brexit Party. So Channel 4 put melting ice sculptures shaped like Earth in their places. 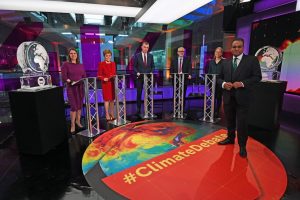 Channel 4, which organized the debate, said the melting sculptures “represent the emergency on planet Earth.”

In retaliation, the furious Conservatives have threatened to review Channel 4’s broadcasting license after the election.

Johnson did not give an explanation for his absence. Conservative cabinet member offered to take part but was denied. Channel 4 news editor Ben de Pear tweeted:

It was kind of @michaelgove to offer himself on C4News instead of @BorisJohnson & we always welcome him. However, as made clear, as he isn’t the leader of the Conservatives his participation was not required at tonight’s #climatedebate– which was strictly for party leaders only. https://t.co/32mISwcyRw pic.twitter.com/0MR3UWRgMC

As the New York Times explains:

Though the leaders emphasized different priorities, all agreed on the urgency of addressing climate change and outlined ambitious proposals, like “a green industrial revolution,” promised by Mr. Corbyn. In June, the Conservative government of Mr. Johnson’s predecessor, Theresa May, vowed to cut greenhouse gas emissions to almost zero by 2050.

British green energy utility company OVO released a study saying that Brits send more than 64 million unnecessary emails a day. So what does this have to do with the environment? “If every Brit sent one fewer ‘thank you’ email a day, we would save more than 16,433 tonnes [metric tons] of carbon a year — equivalent to 81,152 flights to Madrid or taking 3,334 diesel cars off the road.”

While the carbon footprint of an email isn’t huge, it’s a great illustration of the broader principle that cutting the waste out of our lives is good for our well-being and good for the environment. Every time we take a small step toward changing our behavior, be that sending fewer emails or carrying a reusable coffee cup, we need to treat it as a reminder to ourselves and others that we care even more about the really big carbon decisions.

When you are typing, your computer is using electricity. When you press send it goes through the network, and it takes electricity to run the network. And it’s going to end up being stored on the cloud somewhere, and those data centres use a lot of electricity. We don’t think about it because we can’t see the smoke coming out of our computers, but the carbon footprint of IT is huge and growing.

So this is something for all of us, not just the British, to be more mindful of.

Samphire, sea blite, and aster are irrigated by seawater, and those crops are becoming increasingly popular.

As Reuters reports, “United Nations data shows two billion people – a quarter of the world’s population – are now using water much faster than natural sources can be replenished.”

Have a look at the video below.

This farm on the west coast of Scotland is growing salt-resistant crops using sea water. It’s part of a pilot project being run by a British startup that’s helping farmers adapt to the reality of less rain and the effects of climate change https://t.co/ff8gkLyWRE pic.twitter.com/p87L9r8N4k

Former Top Gear presenter Jeremy Clarkson talked out of both sides of his mouth in an exclusive interview with the British tabloid the Sun, which was published on Tuesday. Clarkson intensely dislikes teen climate activist Greta Thunberg. He said:

Everyone I know under 25 isn’t the slightest bit interested in cars — Greta Thunberg has killed the car show.

She’s an idiot. Going round saying we’re all going to die, that’s not going to solve anything, my dear.

He then said of the climate crisis:

Now, what I could do is go on strike, borrow a 50 foot carbon-fiber yacht with back-up diesel engine, sail to America, and shout at President Trump.

I could do that, but it would achieve nothing. So instead, it’s time to talk to scientists.

Somehow, Clarkson appears to have missed Thunberg’s consistent core message, which she repeated to US Congress in September:

The European parliament has declared a global “climate and environmental emergency” ahead of the UN climate conference in Madrid next week.

Our house is on fire. The European parliament has seen the blaze, but it’s not enough to stand by and watch.

MEPs backed a tougher target of cutting greenhouse gas emissions by 55% by 2030, an improvement on the current 40% target, but derided by Green politicians and campaigners as inadequate.

Europe is the first continent to declare a climate and environmental emergency.

With the number of new drinking stations increased, and a water carrying vehicle to replenish the drinking stations, the campaign announced it would use the excess funds to establish a wild koala breeding program.

As many as 350 koalas were believed to have died during recent bushfires in the area, and the campaign said 75% of the areas in the region hit by fire were prime koala habitat.

Bushfires occur regularly in Australia, but scientists have long warned that a hotter, drier climate due to climate change would lead to more frequent and more intense fires.

A new Pew Research survey released this week reveals Americans’ views on climate and energy. Here are some highlights: