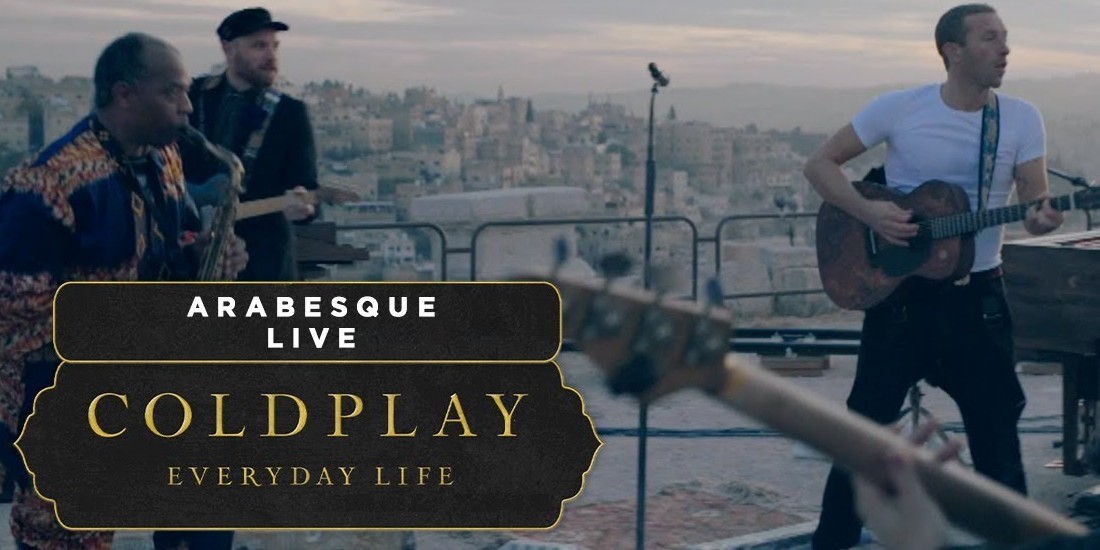 The British band Coldplay announced this week that they won’t tour for their new album, Everyday Life, which was released yesterday, due to environmental concerns.

We’re not touring this album. We’re taking time over the next year or two, to work out how our tour can not only be sustainable [but] how can it be actively beneficial.

All of us have to work out the best way of doing our job… to have a positive impact.

Our next tour will be the best possible version of a tour like that environmentally. We would be disappointed if it’s not carbon neutral.

The hardest thing is the flying side of things. But, for example, our dream is to have a show with no single-use plastic, to have it largely solar powered.

We’ve done a lot of big tours at this point. How do we turn it around so it’s not so much taking as giving?

Instead of touring, they played two gigs in Amman, Jordan, yesterday at sunrise and sunset. They will be broadcast, free, on YouTube. And On November 25, they will play at the Natural History Museum in London, with all proceeds going to environmental law charity ClientEarth.

The Oxford Dictionaries has announced that the 2019 word[s] of the year is “climate emergency.” This is because the use of the term increased by 10,796% in 12 months.

Two weeks ago, Electrek wrote about how Collins Dictionary‘s 2019 word of the year was “climate strike.”

In 2018, climate did not feature in the top words typically used to modify emergency, instead the top types of emergencies people wrote about were health, hospital, and family emergencies.

But with climate emergency, we see something new, an extension of emergency to the global level.

In 2019, climate emergency surpassed all of those other types of emergency to become the most written about emergency by a huge margin, with over three times the usage frequency of health, the second-ranking word.

As the Guardian explains:

The dictionary’s word of the year is chosen to “reflect the ethos, mood, or preoccupations of the passing year” and should have “lasting potential as a term of cultural significance.”

Sarah Poole, deputy director of The United Nations Development Programme Regional Bureau for Arab States, calls for climate leadership in the Middle East. The region is one of the most water-scarce regions of the earth, are the most dependent on food imports, and have suffered terrible droughts.

As the video below explains, solar and wind power has doubled over the last few years, but renewables still account for no more 5% of energy supply, and it’s no secret that Big Oil plays a huge role in the region.

Read the linked article to find out about the steps the region is taking to grow solar power and build resilience.

By 2030, temperatures 🌡️ across the Arab Region could ⬆️ by 2C. How do you transition to #greenenergy in one of the hottest regions on Earth? @UNDPArabStates' @MWahbaUN & @SarahMPoole explain: https://t.co/tUCAcY1iPL #COP25 #ClimatePromise pic.twitter.com/LQPqlriWJO

Brazil’s National Institute for Space Research (INPE) released data on Monday revealing that “3,769 square miles of rainforest were lost to deforestation in a 12-month period ending in July. That marks the highest rate of deforestation since 2008 — and a nearly 30% spike over the rate recorded by INPE during the previous yearlong span,” according to NPR.

And as NPR says, for scale, that’s 12 times the size of all of New York City.

Brazilian President Jair Bolsonaro has made no comment on the numbers, as his focus is primarily on economic growth. He sees environmental regulations as prohibitive to that growth. Bolsonaro is also a climate skeptic.

At a news briefing Monday, Brazil’s environmental minister, Ricardo Salles, vouched for the accuracy of the stark numbers and said authorities are considering new ways to combat the illegal logging and mining operations that he blamed for the rising tide of destruction.

His job is cut out for him; Bolsonaro is slashing environmental budgets and staff who work to curb illegal logging and ranching in the Amazon.

On Monday, NOAA released more depressing news: The earth had its second-hottest October and year to date on record. Oh, and if that wasn’t enough, Arctic sea ice coverage shrank to a record low in October, too.

In 2013, there was a fire at the West Fertilizer Co. plant in West, Texas. It caused ammonium nitrate to ignite, and it triggered a huge explosion that destroyed the plant, as well as a nearby nursing home and apartment complex.

The explosion killed 15 people, 10 of whom were firefighters.

The EPA then put regulations in place under the Obama administration that chemical plants provide members of the public information about risks upon request.

On Thursday, Trump’s EPA announced that they were ending those regulations. EPA administrator Andrew Wheeler says the regulations were “unnecessary administrative burdens.” Chemical manufacturers lobbied — clearly successfully — for those changes.

If you lived next to a chemical plant, would you want to know what was being manufactured there, and what the risk was to your home, your family, and your own life? Yeah, we thought so. Imagine what a blow this rollback announcement was to the people who lived in the nursing home and the apartment complex — and to the families of those who lost their lives.

Way to put profit before people, EPA. The focus of your press release is about how much money you’re going to save — but it doesn’t quantify that or provide evidence. It might be time to change your name to something else.

Diane Lane was just arrested. She is yelling “show up for climate” as she is taken to the police van #FireDrillFriday pic.twitter.com/bLmciGO9CW

In Fonda’s seventh political demonstration, this time at the US Supreme Court, she was joined by actresses Diane Lane and Piper Perabo, actor Manny Jacinto, and model Amber Valletta. Perabo, Lane, and Valletta were arrested. Today’s protest focused on the impacts on water resources.

Alice Brown Otter, 16-year-old activist and member of the Standing Rock Sioux Tribe, at #FireDrillFriday.
4 years ago, the summer before entering 7TH GRADE, Alice and several other youth ran to DC to oppose the construction of the Dakota Access Pipe Line. pic.twitter.com/IDKaIdLTHG

After 10,000 rounds of tear gas have been fired in Hong Kong over the last five months during ongoing anti-government protests, residents are worried about dioxin poisoning.

People are avoiding eating fresh fruit and vegetables that may have been exposed to the dioxin, and there is online advice telling women to avoid becoming pregnant for two years if they are exposed to tear gas.

Most fruit in Hong Kong is sourced from a wholesale market in Yau Mai Tei on the Kowloon peninsula, a protest hot spot, according to Reuters. Business has dropped there by up to 80% this week.

Obstetrician Kun Ka-yan says “the main component of tear gas, does not directly result in miscarriage or baby deformities, while dioxin and cyanide only affect pregnant women if they are exposed to a large dose, or if the agents contaminate the food chain.”

Secretary for Food and Health Sophia Chan said, “For the sake of prudence, food suspected to be contaminated or showing abnormality should not be consumed.”