One of the biggest boosters of electric vehicles in Congress is a Republican representing a rural stretch of east Kentucky. The Congressman is also a legit Tesla hacker with a YouTube channel, two MIT engineering degrees, and serves on the US House Committee on Transportation & Infrastructure. So what does he think about the Tesla Cybertruck, and what new projects can we look forward to on his farm?

Congressman Thomas Massie started young with electric vehicles. He joined the MIT solar car team in 1989, helping build and race the solar car from Florida to Michigan in GM Sunrayce USA 1990. He was a Tesla early adopter, putting down a $5,000 deposit in 2010 on a Model S, sight unseen. He picked it up in January 2013, VIN #3347, and has been driving it ever since. Even in the pre-Supercharger days, he used his Model S to travel back and forth between Kentucky and DC, sleeping in the back while charging at RV lots. On his YouTube channel, he’s showcased building his own homebrew Powerwall with a salvaged Model S 85 battery. He has Kentucky’s official “Friend of Coal” license plate, showing that he’s proudly supporting his coal country constituents by driving an EV. 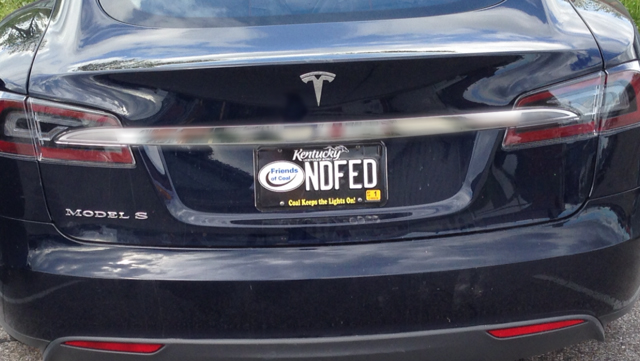 (note: this interview is edited and condensed from a longer conversation)

Q: So, first thoughts on the Tesla Cybertruck?

A: First impression is that I like that it’s stainless steel. For a lot of electric cars, the life of the drivetrain is measured in decades. It’ll outlast the body. So stainless steel was a good choice. I’m very interested to see the towing setup. I need it to pull a fifth wheel trailer. I drive a 240-mile roundtrip with a loaded 16’ foot cattle hauler, so I’m eager to see what kind of range I’d get. I’m also really curious about Tesla’s ‘Cyberquad’ ATV. I have a Polaris Ranger that I’ve been planning on EV converting.

Q: Can you tell us more about converting your Polaris ATV?

A: I’d use two Tesla Model S battery modules. The Model S pack has 16 modules, I’d use two them, run it at 48V, and probably use the Briggs and Stratton 48V electric motor that’s out there. I already have one for my son’s go-kart. Two modules would equal 10kWh of capacity.

Q: What about using a Model 3 battery?

A: The Model 3 battery is less hacker-friendly (hacking being a good thing, despite its bad name these days) because it has 4 modules instead of 16, and the modules aren’t all the same voltage. Each Model S battery module is 24V, you can wire them up easily in a number of configurations. The Model 3 battery has 4 modules, and they’re all higher voltage than most off-the-shelf commercial inverters today. It doesn’t lend itself to compatibility with 48V. You see this reflected on eBay, the Model S battery goes for more.

Q: Have you considered trading in your Model S for a Model 3 so you can add to your home energy storage?

Q: Elon just tweeted that the Cybertruck will have a solar roof option to add 15 miles of range per day, what do you think of that?

A: I personally really like that option. I’m a bit bothered by battery phantom drain. Having enough solar to offset that is a very good improvement. People are used to finding the same amount of gas in their car even after they’ve been gone for a month. 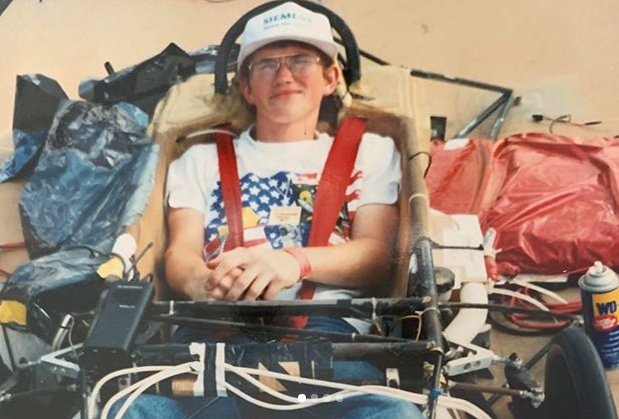 Thomas Massie in the MIT solar car he helped build in 1990.

Q: You’ve got experience with solar cars, can you tell us about that?

A: I joined the MIT solar car team in 1989, and the next year we entered the car in the GM Sunrayce. We competed with 32 teams, racing from Florida to Michigan. Our car had about 900W of solar, and if it was sunny out, we could drive 32mph at break even – the car’s amp meter would read zero. That was such a cool feeling. The battery was a silver-zinc battery designed for torpedoes. The captain of our team was James Worden, who went on to found Solectria. His company bought Chevy Metros, took out the power train, and resold them as EVs, he was a real EV pioneer.

Q: What’s another feature you’d like to see in the Cybertruck?

A: One thing I want to see for all Teslas is a way to more seamlessly integrate charging with solar. It’s especially important when you’re off-grid, like I am at the farm. Having my Tesla crank up its charging when the sun is beating down, and wind down its charging when the clouds come in. I put a solid state relay in the circuit breaker in my house, wired to the 240V outlet I use for my Tesla. When the sun is blaring, I turn it on, and when I lose the sun, I can cut it. But if you do this too often (more than twice a day), the Tesla will think it’s connected to a faulty outlet and refuse to charge.

Q: Do you think the Cybertruck will be a hit in Kentucky?

A: One of the things that attracts businesses to Kentucky is our low cost of electricity, so that should help people go electric here. I think driving electric with a “Friends of Coal” license plate also helps people make a connection between driving electric and supporting homegrown, locally generated power.

Q: I saw that recent video tour of your farm. You have a creek on your property, have you ever looked into micro-hydro?

A: I’ve surveyed the creek many times to see its elevation drop. I built a makeshift weir (ed note – a weir, or low head dam, is a barrier across the width of a river that alters the flow characteristics of water) to measure the height, estimate the volume of water traveling through the creek. But each time I looked at it, I concluded installing more solar or battery storage makes more sense. I am still pursuing pumped hydro for stored energy. I built a pond with a vertical elevation 200ft higher than my house. I ran a 2” line from it, big enough to allow a substantial flow at 88PSI. (ed note – this is very cool, coal country is already home to “the world’s largest battery” in the form of a pumped hydro station in SW Virginia)