Just when I thought I’d ridden nearly every type of electric bicycle out there, along comes the Taga Family Electric Cargo Bike. Not only does it have a giant front trunk (an e-bike with a frunk?), but it also has two kids’ seats to carry the family around.

I’d say that the Taga Family Electric Cargo Bike is like the minivan or SUV of the electric bicycle world.

Or perhaps the electric tricycle world, since the Taga’s three wheels technically make it a trike.

But this is perhaps the most fun I’ve ever had on a tricycle, and the kids seemed to have a pretty good time riding it, too.

Make sure you check out the video review below to see this thing in action as a cargo bike and a multi-child hauler. Then read on for my full review! And stick around until the end, where I’ll show you how to get this Taga bike for 50% off! 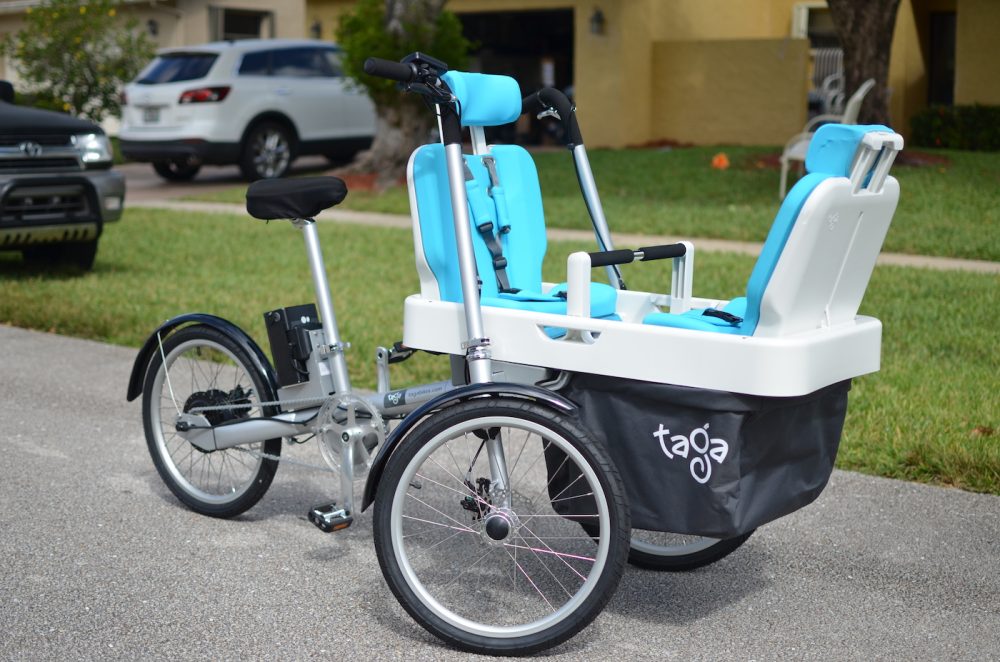 The Taga Family Electric Cargo Bike is a solidly made, fun-to-ride bike. But to really get the full experience, you’ll have to start off with a few hours of assembly before you get to have any fun.

Taga does a pretty decent job of providing both written and schematic drawing instructions, but it’s still a bit of an undertaking to get it all together. I’d recommend setting aside a good two hours for the whole thing, at a minimum. It’s a Sunday afternoon type of project.

But once you get it all put together, the bike is a blast!

I outfitted mine with a pair of seats, which is the Duo option on the Taga site. The seats are rated for kids up to around 8 years old, so I got to take my 5- and 7-year-old nephews for quite a ride.

Even when loaded down with kids, the Taga Family Electric Cargo Bike has plenty of power and acceleration. 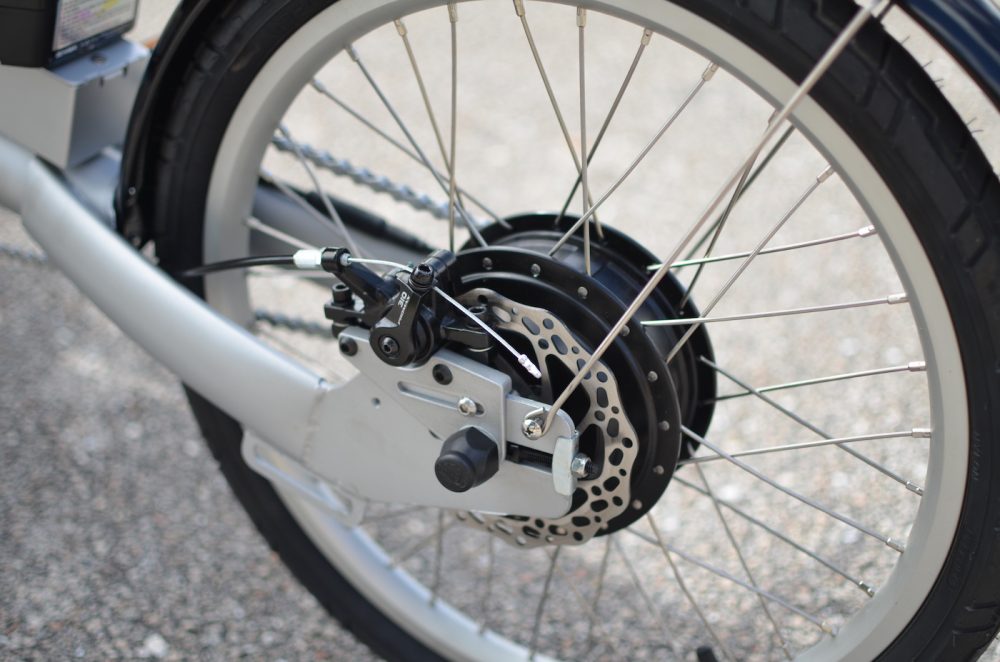 The kids were fairly comfortable in the seats, though we did find that their knees were a bit close to one another. That’s probably because I had them in the center facing position. It’s also possible to put both seats facing forwards, but the boys had fun laughing and playing while being able to see each other, and preferred sitting face-to-face.

There is also an H-bar accessory that I received that gives the kids a hand bar to hold onto. However, it mounts right where the kid’s knees are and ate into the valuable knee room, so we didn’t use it too often. The H-bar definitely works better in the two-seats-forward position. 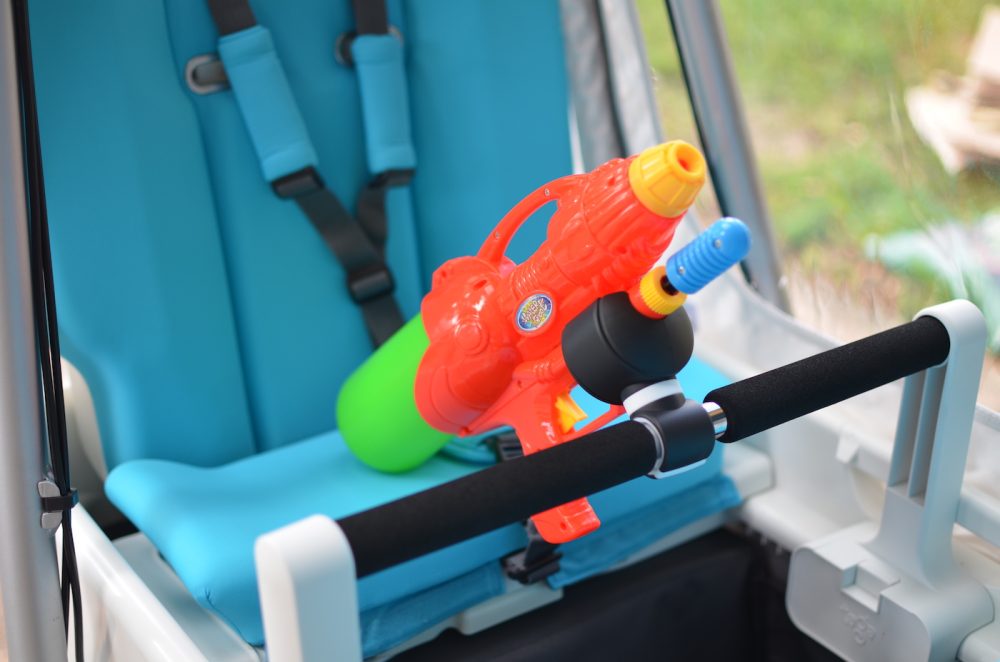 We also got a water gun that mounts on the H-bar, though that got nixed early on due to fears of the boys fighting over whose turn it was to shoot each other point-blank in the face. I was prepared to allow it, but my sister (their mother) had veto power there. The water gun attachment is probably best for when you’re carrying just one kid, in order to avoid friendly-fire casualties.

In terms of the ride, the bike felt solid as a rock on straightaways. In turns it was still quite good, but I found that you have to be careful about going into turns too fast. That’s true of any tricycle, though the tadpole configuration (two forward wheels) of the Taga is actually more stable than the delta configuration (two rear wheels) of tricycles from your childhood. As long as I didn’t try to make a quick turn at full speed, I was fine. And in fact, the Taga felt even more stable when I had the kids in it, as their added weight seemed to help.

When it was just me, I could lift up one wheel when taking turns too sharply. That was actually fun, and I found I could ride around on two wheels with the third up in the air waving hello like an Orca fin in a SeaWorld show. Don’t try that with kids in it, though — I don’t think you’re supposed to do stunts on this bike.

The brakes also felt strong and responsive. With three disc brakes, you should be able to stop with confidence even while hauling heavy loads. There’s also a parking brake built into the left brake lever, which is actually super convenient. Unlike a standard bike on a kickstand, the Taga rests on three rolling wheels and can get away from you if parked on an incline without engaging the parking brake. 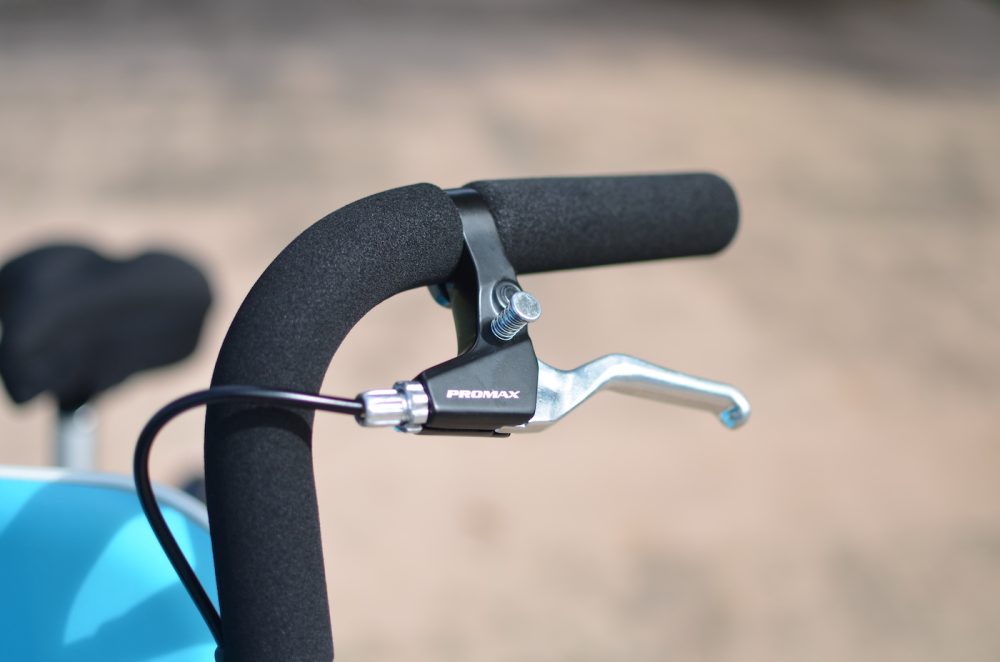 It has a huge capacity soft-sided cargo carrier upfront with a beautiful wooden base to securely hold whatever you’re hauling. I don’t think you’re supposed to do this, but I could stand up in it and it felt totally stable.

The capacity of the cargo area is huge, and you could absolutely fit a week’s worth of groceries in there. You can also go with the single-seat version of the bike and be able to haul cargo and a kid at the same time.

Theoretically, you could put some cargo in there with two kids on board, but their feet hang down into the cargo area, so you’d really be cutting into your volume capacity. 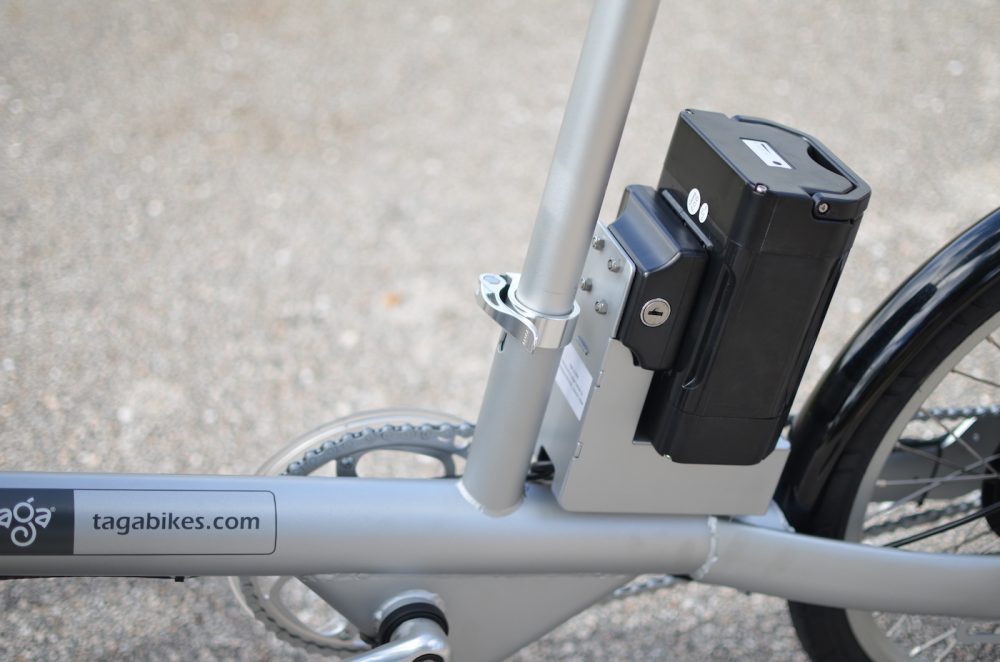 The battery on the Taga is removable, which is good because this would be a big bike to bring inside to charge. If you have a garage to park in then you’ll probably never need to remove the battery, since you can just charge it on the bike. But if you’re in an apartment, parking in a bicycle room, or otherwise need to charge the battery away from the bike, you’ve got that option.

The bike can also be disassembled to fit into a trunk. It breaks down into a few large, flat pieces. I wouldn’t call the process simple or quick, but it’s definitely doable.

I’ve tried different cargo bikes before as kid carriers and they all work to a certain extent. But the design of the Taga trike is a game-changer in terms of stability and comfort. Kids aren’t straddling a saddle — they’re buckled into comfortable and adjustable seats. And you don’t have to worry about the bike tipping over since it is inherently stable.

The whole thing just blew me away and reinforced the idea of how easy it is becoming for e-bikes to become true car replacers.

When you can practically run a kiddie carpool with your e-bike, you’re doing something right!

Testing out the Royal Canopy accessory

If you want to check out the Taga Family Electric Cargo Bike, head on over to their site. The models range from around $3,300 to $3,900 depending on the accessory package. I definitely recommend adding the fenders, but I also really like the royal canopy option, especially if you live in a rainy area. And if you don’t mind providing all of the pedal power yourself, there’s also non-electric versions in the $1,500 to $1,900 range.

BUT WAIT, THERE’S MORE! Sorry for yelling, but check out this deal. We take care of our Electrek readers and try to get you guys discounts when we can. The kind folks at Taga have generously agreed to offer their bikes at 50% off and the accessories at 25% off if you use the code ELECTREKTAGA at checkout. But it’s only good until the end of this month, so don’t wait too long!

And don’t forget to let us know what you think of the bike in the comments below!