Swytch has just announced the newest version of its already popular electric bicycle conversion kit. The new version is lighter, smaller and easier to use, making it that much simpler to convert a pedal bicycle into an electric bicycle.

I first ran into Oliver and Dmitro, the duo behind Swytch, at the Eurobike 2019 trade show last month.

Together they were showing off the newest version of the Swytch kit. The first version went on sale two years ago, but the newer version shrinks the unit down into a smaller and lighter package. In fact, Swytch claims it to be the smallest and lightest weight e-bike conversion kit in the world.

I’ve always been a fan of electric bicycle conversions. Heck, I even wrote the industry guidebook on the subject.

But I haven’t seen a kit quite like Swytch before. 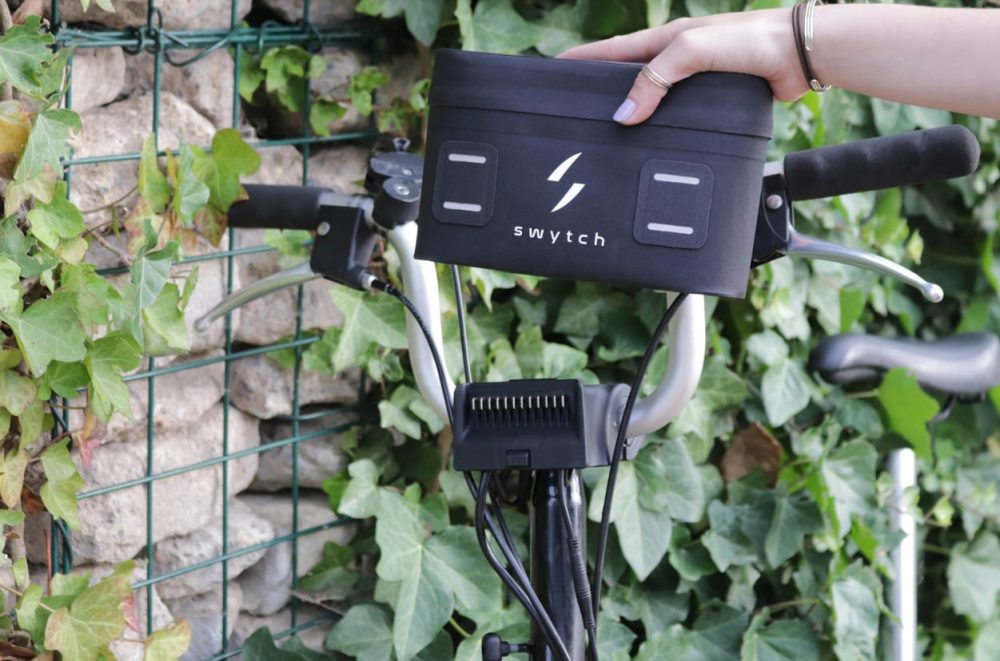 While the front hub motor is admittedly Plain Jane, it’s the rest of the kit that hides the bulk of the innovation. And it hides it well inside the small front handlebar pouch known as the PowerPack.

That’s where the battery, electronic speed controller, and everything else necessary to make an e-bike is mounted. And the entire rigid pouch can be removed from the quick-release mount, making it easy to take the expensive part of the kit with you when you park your bike outside. It also makes charging easier, since you can charge the battery just about anywhere, on or off the bike.

The Swytch kit’s PowerPack fits in your hand, though it’s just a bit too big for me to call it “pocket-sized” unless you’re wearing cargo pants. Even so, it’s surprisingly small.

The 250 W motor puts out 40 Nm of torque, which is equivalent to Bosch’s Active Line of mid-drive motors. It’s not crazy torquey (especially after I’ve been recently riding mountain climbing e-bikes with 4x that torque) but Swytch says it’s enough to do a 20% incline without pedaling, or 30% with pedaling.

Power can be actuated either via a pedal sensor for pedal-assist or a half-twist throttle that riders can install on the handlebars. And because of the quick-release designed into the PowerPack, there are no connectors to unplug when you remove it from the bike – everything gets run through the handlebar adapter and a single quick release. 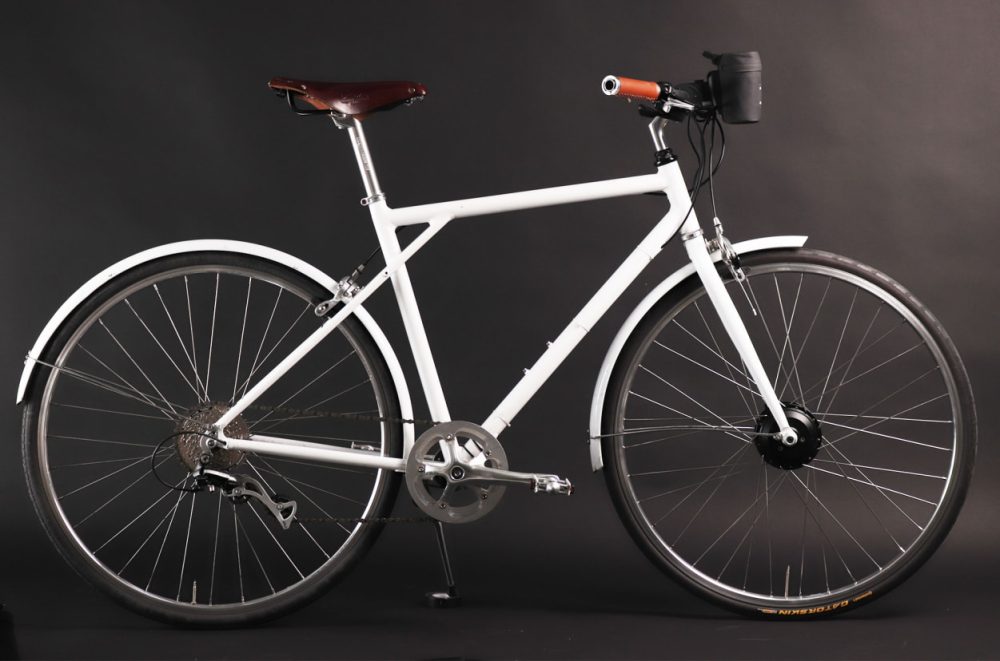 Riders in the US will be able to hit 20 mph (32 km/h) using the Swytch Pro kit, while EU riders will be able to use the Swytch Eco kit that is limited to 15.5 mph (25 km/h). There’s also a Swytch Tour kit that doubles the size of the battery to allow a range of up to 100 km (62 mi) with the lowest level of pedal assist. 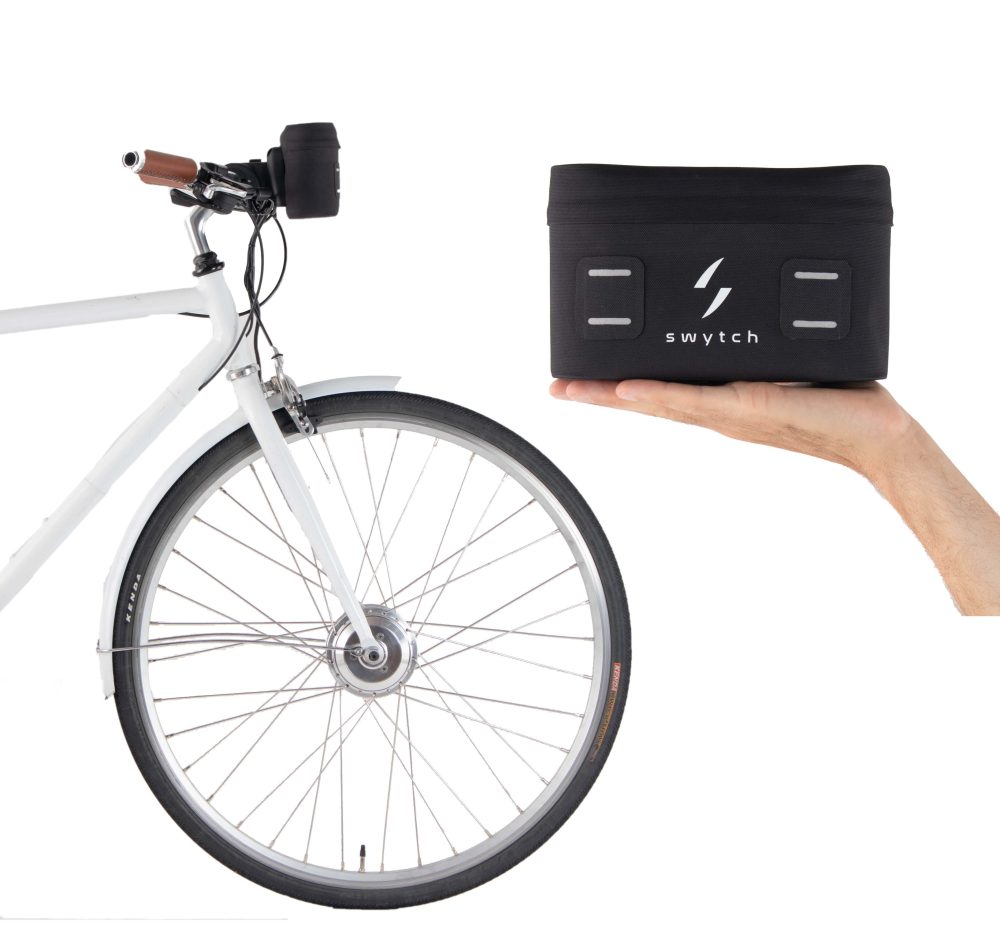 There’s also a smaller wheel version of the kit designed to fit Brompton folding bikes, with that kit listed at between US $491 to US $614, depending on whether riders select the Eco or Pro version.

Swytch is also attempting to differentiate themselves from the rest of the pack with an emphasis on service. The team is offering free video-chat support to help riders who struggle to install the kit. From what I could see, the installation looks pretty simple (replace a wheel, screw on the mount to the handlebars, snap on the sensor down by the pedal crank, done!) but the company says they’ll be there in the form of a live video chat to help give anyone some extra help, should they need it.

We rarely cover crowdfunding campaigns here on Electrek. In fact, we generally only make rare exceptions under one of two circumstances: 1) The company is already established and has a track record of reliability, or 2) We’ve been able to personally test out the product and confirm it exists and works well. In this case, Swytch fulfills both of those requirements. 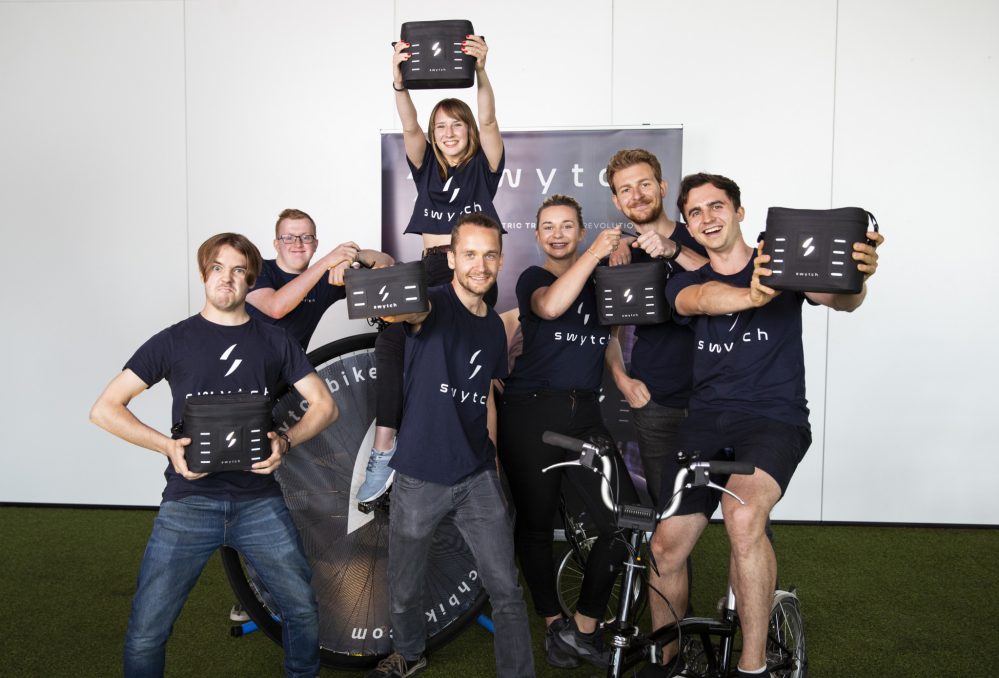 The Swytch team with multiple versions of the kit

They’ve already delivered over 3,000 units of their original kit, first debuted two years ago. And I got the chance to test out the kit (both the larger wheel version and the Brompton version) at Eurobike 2019, where I came away impressed.

The kit seems well made and I love the form factor of that tiny PowerPack. Plus it means I can take nearly half of the extra weight off the bike, leaving just the small motor (1.5 kg) when I want a pedal-only workout. To be honest though, at just 3 kg for the total kit, it doesn’t add that much weight to the bike anyways.

I’m also going to get my hands dirty putting an early media sample of the Swytch kit on a bike to test the installation and review the kit over a longer period, so be looking back for that review in the next week or two. But from what I saw (and felt) during my testing earlier this month, the Swytch kit is a really cool piece of gear that works great. And it’s always refreshing to see a new take on standard e-bike conversions kits. If you want to check out the kit in detail, you’ll find it here.