First Ride: Bianchi Aria E-Road – Believe it or not this is an electric bicycle 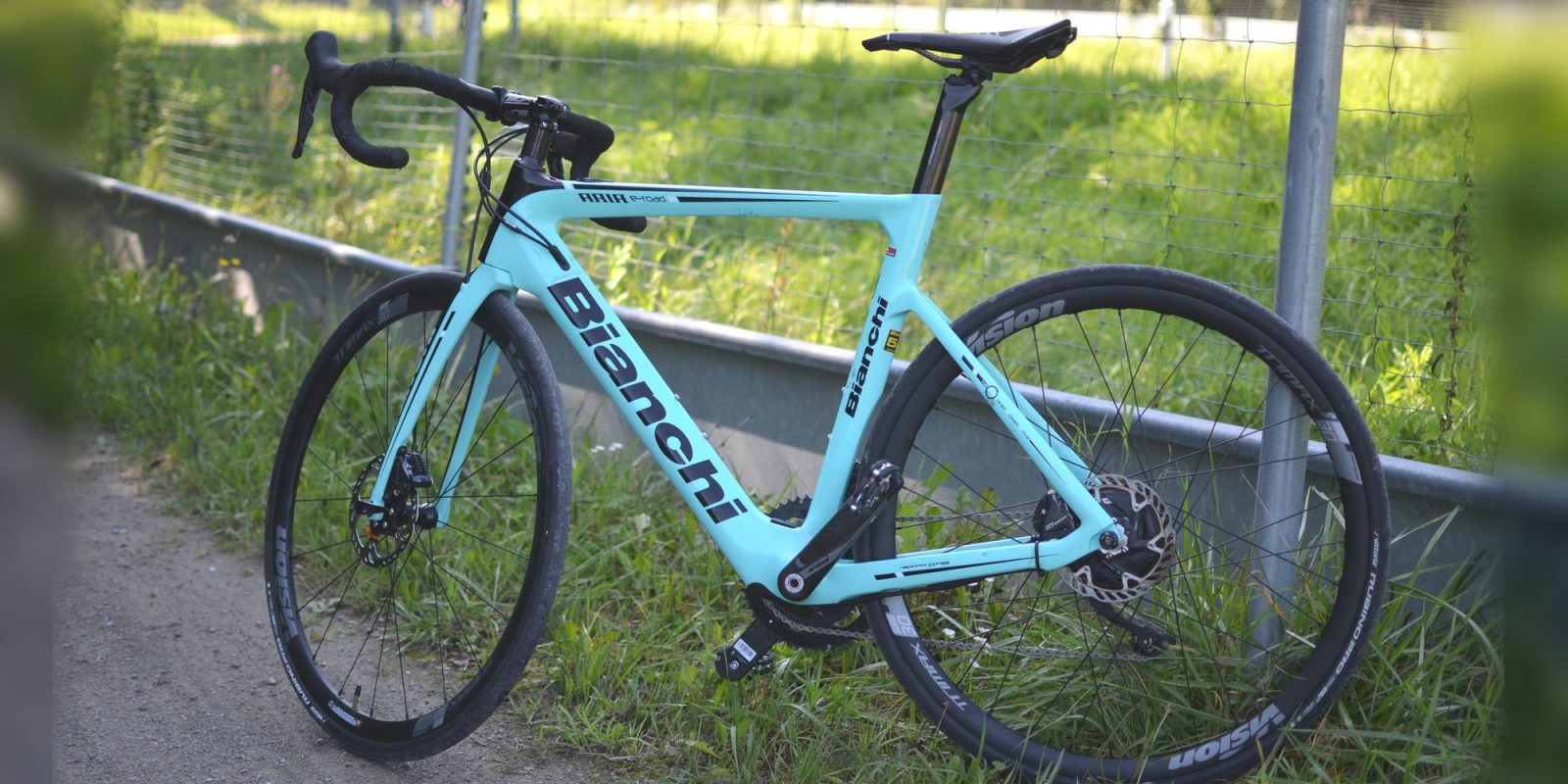 I recently got the chance to test out the Bianchi Aria E-Road at Eurobike 2019. This lightweight road bike has a hidden surprise – it’s actually a stealthy electric bicycle.

Sure, the Bianchi Aria E-Road looks like a standard road bicycle. But the fact that I’m writing about it on Electrek might be the first clue that this is actually an electric bike.

To be fair, I didn’t have the luxury of that hint when I first laid eyes on the Aria E-Road among dozens of other random bikes in the test area at Eurobike 2019.

What I did spy was what appeared to be a small hub motor in the rear wheel, all but invisible behind the disc brake and cassette. In fact, the motor was smaller than just about any other hub motor I’ve seen, and there was a distinct lack of a battery mounted anywhere on the bike, and so I wasn’t yet convinced.

Picking the bike up didn’t do it any e-favors either. Weighing just 12.3 kg (27 lb), the lightweight road bike felt practically weightless compared to my other heavy e-bikes. 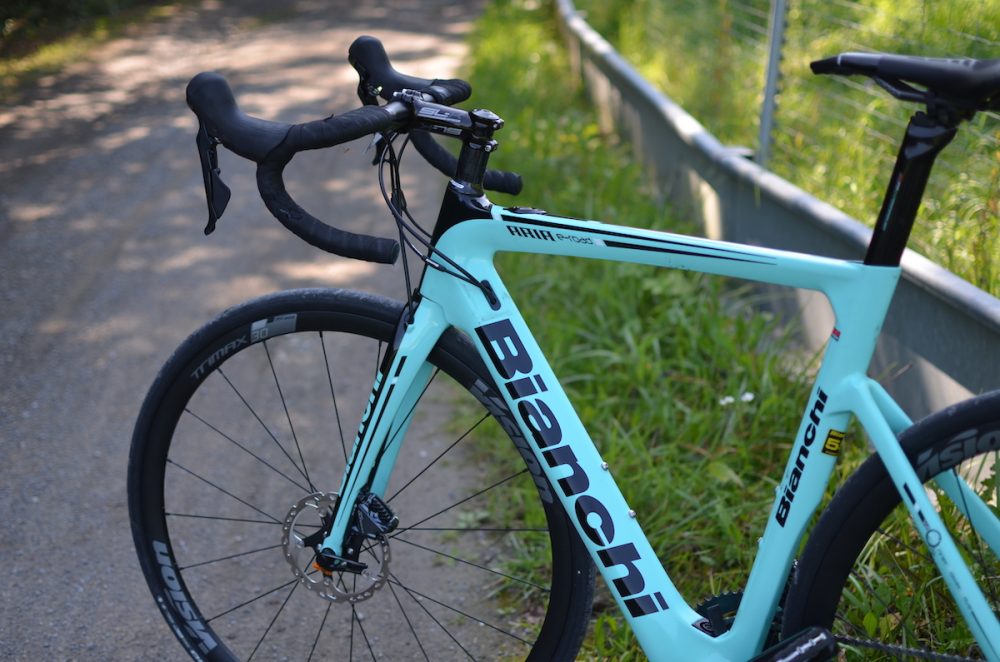 Looking the bike over further showed it was missing a digital display, a throttle and many other bits and pieces often (but not always) found on electric bicycles.

But then I spied it. There it was, hidden at the bottom of the bike, right where the down tube meets the seat tube: the charge port.

Aha! It is electric! And so I must ride it.

And boy did I ride it.

I should note that I’m not a road biker. I wouldn’t even call myself a cyclist, at least not in the traditional sense. I’m an e-biker and one that is specifically used to larger, heavier duty e-bikes. Bikes built for the higher forces seen on electric bicycles. Hell, I’ve dated girls that weigh less than some of my e-bikes, to put that into perspective.

And so to ride an e-bike that I could lift with a finger was a 180-degree shift for me, even when staying inside my e-bike world.

While I expected an anemic motor and sluggish performance, I was pleasantly surprised by the Bianchi Aria E-Road. It wasn’t a rocket, of course. It wasn’t overpowered. But I was pedaling up hills with what felt like the perfect balance of effort between man and machine.

It wasn’t a motorcycle, like many of my other e-bikes. That means I couldn’t rely on the bike to do the work for me. But it also wasn’t weak or ineffective. It gave me enough assist that I felt confident riding harder than I ever would on a standard pedal bike.

And yet the whole time it still felt like I was a real cyclist on a real road bike, not like I was pretending on an e-bike. 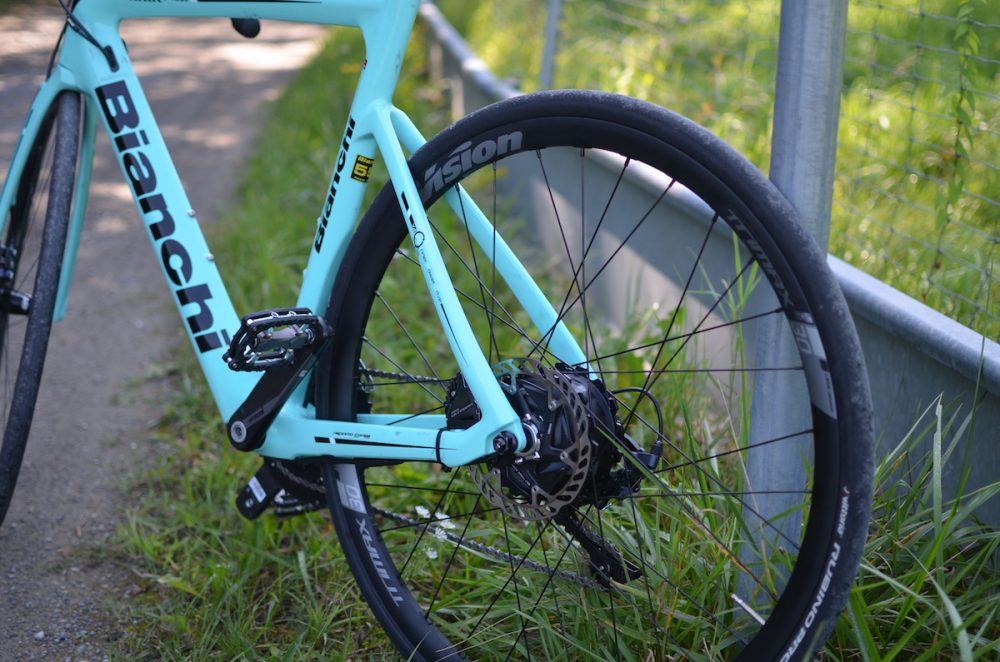 The lack of a display was a bit odd to me at first, but to be honest I think I like it. Sure, I don’t have an exact battery meter, but that’s fine with me. The bike has a range of around 120 km (75 mi), so I know that if I’m staying under that, I should be fine. And there’s no distracting light or blinking indicators on the handlebars to detract from the beauty of my scenic ride. Riders who really desire a display can still use the Bianchi app that pairs with the bike and gives you all the info you could ever need, mounted directly to your handlebars.

The whole experience just left me feeling so positive about the concept of e-road biking. I’ve never really e-biked for exercise before – it’s always been a purely utilitarian or recreational thing for me. But the fact that I could enjoy pedaling a lightweight, efficient road bike, get a moderate workout, and have the confidence to know I wasn’t on my own if I rode farther than I intended was all part of an awakening I had about e-road biking.

And sure, the Bianchi Aria E-Road isn’t the only bike out there that can do it for you either. I had somewhat of a similar experience on the Yamaha Wabash, though that is an electric gravel bike and I felt more like I was mountain biking than road biking on that bike – even though the bike was pretty much at home during both activities.

But the Aria E-Road is the bike that did it for me and opened my eyes to what a great experience this can be. 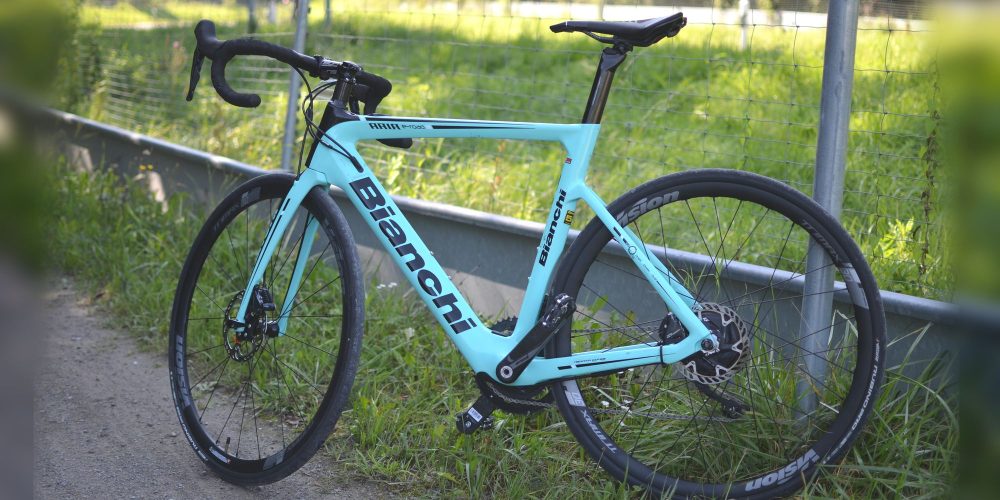 At $6,500, the bike is certainly not cheap, but the craftsmanship is wonderful and true road cyclists will pay the premium that features like a carbon frame and fully integrated electronics warrant. For those that want the e-road biking experience for cheaper, there are of course other options out there. These days you can find an electric road bike for under $2,000. But it’s certainly not going to look as good as the Bianchi Aria E-Road or trick anybody into thinking you’re on a pedal bike.

So if you’re serious about getting into the hobby, I can see why someone would spend this kind of money.

Me? I’m not sure I’m ready to give up my big ol’ fat tire electric bikes just yet. But I do plan on getting on some electric road bikes more often and making my legs do a bit more of the work.