Tesla V10: first look at release notes and features of the massive update

Tesla’s V10 software update is starting to make its way to owners in the early access program, and Electrek has obtained the descriptions and imagery.

We are getting our first look at release notes of the version 10 update and all its features.

It’s quite a massive update, so let’s get started…

If there’s a theme to this Tesla V10 update it’s “fun,” which is why it’s not surprising that of all the features in the update, Tesla starts out the release notes with Cuphead.

Cuphead is a classic run and gun action game inspired by cartoons of the 1930s and heavily focused on boss battles. For the Tesla Edition of Cuphead, enjoy the game’s full first Isle as you play as Cuphead or Mugman (in single player or in local co-op). Traverse strange worlds, acquire new weapons, learn powerful super moves, and discover hidden secrets while you try to pay your debt back to The Devil!

The automaker has recently added Xbox controller support for its Tesla Arcade games and you are probably going to want to use one for this game. You are going to want an Xbox controller with a USB cable for it. Tesla CEO Elon Musk tweeted in July that it would be coming in August, so mid-September means it’s right on time. He later tweeted that it was his favorite game.

Here’s the game in the new “Tesla Arcade”: 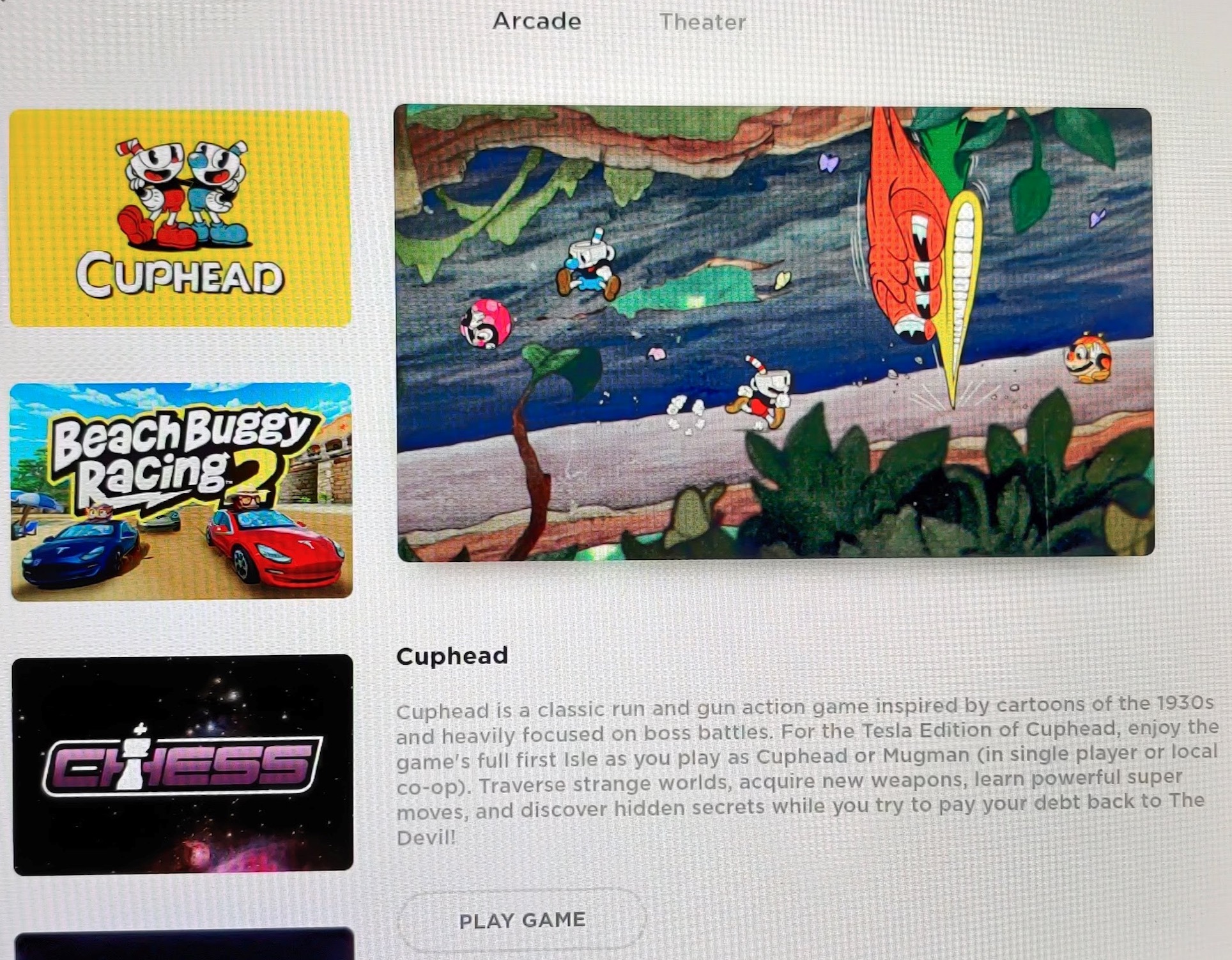 One of Tesla V10’s most anticipated features is the ability to watch videos when the vehicle is parked.

It’s officially in the new update, and Tesla is calling it Tesla Theater.

Here’s what the automaker says about the feature in the release notes:

Tesla Theater lets you watch movies and videos when your car is in PARK and connected to Wi-Fi. To launch the Tesla Theater, tap the new ‘Entertainment’ Icon in the Application Launcher and select the Theater tab.

Tesla notes that for the early access program, owners can actually use the feature over the cell network included with the car.

That’s presumably because it would greatly reduce the number of use cases, and the bill from the mobile carrier will be reasonable. But that won’t scale.

Elon Musk previously said that Tesla would start installing free Wi-Fi at its Supercharger stations so that owners would be able to connect and use the feature, but we haven’t seen that happen a lot yet.

Here’s a screenshot of the new Tesla Theater:

Again, keeping with the fun theme, the automaker is also adding Caraoke to Tesla V10 features:

Sing karaoke to your favorite songs and artists in your car. You can select Caraoke from the Media menu. Tap the microphone icon to adjust whether the vocal track plays while you sing along.

Tesla notes that while you can play the tracks while driving, the feature will only display the lyrics when the car is in park. That’s a bit of a shame for road trips with the family, but safety first.

You can now get a 14-day free trial for Zalkon to get great electric vehicle and renewable energy stock ideas. Our first idea increased in value by more than 30% in the first month, and we just now released our second green stock idea.

We have already seen some of these new visualizations being introduced over the last few weeks, but here they are now officially in Tesla V10.

The driving visualization has been improved to display additional types of objects and lane lines around your car in more environments.

Additionally, you can drag and pinch the driving visualization to temporarily adjust view angles and zoom. After a short of inactivity, the visualization will return back to the default position.

We already got a quick demo of this new driving visualization with zoom-in and rotate last month:

Tesla also made specific changes to the driving visualizations related to the Automatic lane change:

We also had a quick look at this new feature last month, thanks to a Model 3 owner on the early access program (“Tesla Life of Deenchik” on Twitter): 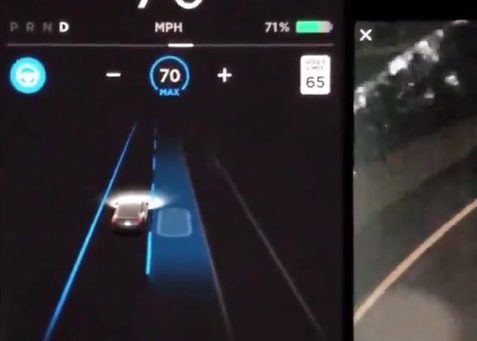 These were features that were suggested by a Tesla owner on Twitter, and Elon Musk decided to include them in the Tesla V10 software update.

Tesla writes about the feature in the release notes:

Feeling lucky or feeling hungry? Go on a surprise adventure to a nearby attraction by tapping Navigate > Lucky or get directions to a local restaurant chosen by your Tesla by tapping Navigate > Hungry. We have also updated the place pop-up to include easy access to a website associated with the location if one exists.

These new options appear right next to the usual “Home” and “Work” options when entering a new location in navigation:

These new Feeling Lucky options are not the only improvements to navigation and maps in Tesla V10.

The automaker wrote in the release notes:

We have improved maps to make it easier to find and navigate to where you want to go. When searching for a destination, the autocomplete search now includes the distance to each suggested place. Also, you can now directly tap the labels on the map to quickly view the associated place details and navigate to that destination.

That sounds like a very simple feature to add, but it might actually be one of the most useful features of the Tesla V10 update.

Here’s the new pop-up when pressing on a location: 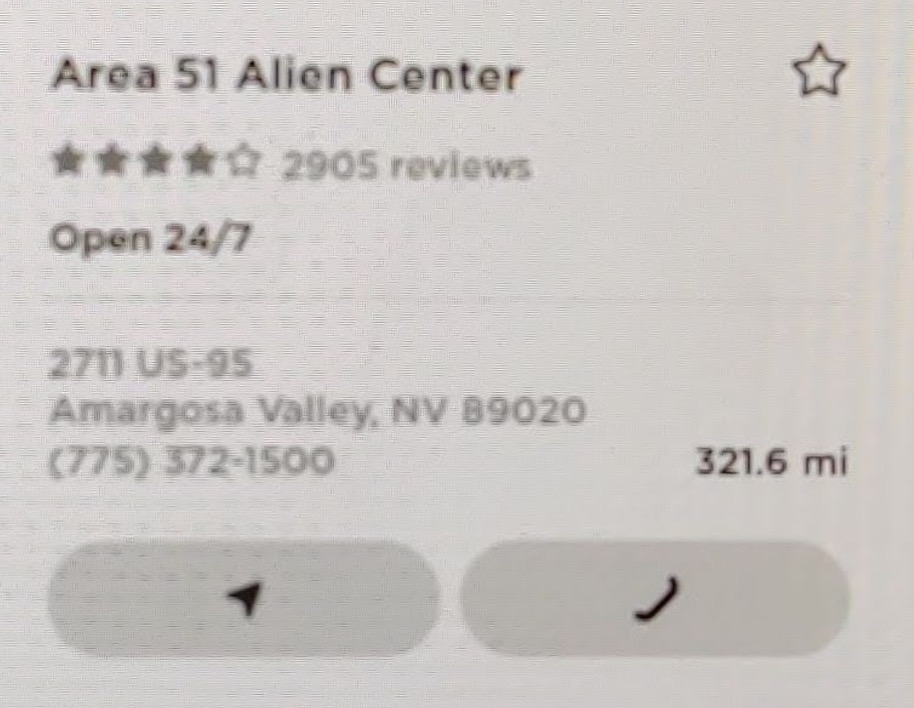 Tesla’s Sentry Mode has been one of the standout features for Tesla in 2019, and the automaker is making a few improvements for V10:

Sentry Model video clips are now saved in a separate folder on your USB drive to make them easier to review and manage. Also, the older Sentry model video clips will now be automatically deleted if there is not enough space on the USB drive, and Sentry Mode clips are using more than 5 Gigabytes of space.

Those are simple yet useful updates to Sentry Mode, but keep in mind that Sentry Mode is just as good as your own setup for it.

I recommend Jeda’s Model 3 USB hub to be able to still use the other plugs and hide your Sentry Mode drive. For the drive, I’m now using a Samsung portable SSD, which you need to format, but it gives you a ton of capacity, and it can be easily hidden in the Jeda hub.

Another feature suggested by an owner on Twitter is “Joe Mode,” and I think that’s what inspired the name.

The Tesla owner who suggested the feature said that some of the chimes were waking up his kids.

With V10, Tesla is also introducing updates to the information about new software updates:

Tesla has been making several changes to the way it pushes updates over the last year in order to be more transparent.

As you can imagine, with all those new features in Tesla V10, the automaker had to update the application launcher:

The application launcher has been reordered to make it easier to launch the Phone App. We have also replaced the Tesla Arcade with Tesla Entertainment.

When clicking “Tesla Entertainment,” you get Tesla Arcade and the new Tesla Theater.

This is a version of V10 in early release, and things could change by the time it reaches a wider release.

Other features have also been linked to Tesla V10, like Smart Summon and upgrades to the music app.

We are going to try to bring you more information about some of those new features over the next few days. If you have more information, don’t hesitate to contact me (info below).