Tesla is participating in a new initiative by an African telecom to install 520 Powerwalls at their sites in order to keep their important network online despite frequent power outages.

Like in most places, mobile networks are extremely important to the economy, but you could argue that it is even more important in Africa, where transaction systems are not as common and most people use mobile-based digital transactions.

It’s especially the case in Zimbabwe, where there are frequent shortages of physical cash.

The problem is that the electric grid is unstable and often suffers brownouts and blackouts, which in turn cripples the telecommunication networks.

Econet Wireless decided to use Tesla Powerwalls to address the situation.

Last year, they installed Powerwalls at one of Econet’s telecommunication towers to provide backup power and after a 12-month trial period, they are impressed with the performance.

The battery packs store energy from the grid or solar panels while the energy is available and if there’s a power outage, the Powerwalls started powering the cell tower.

“We were impressed with the performance of Tesla Powerwall during the trial stage. It addresses the power back up requirements, offers 100% depth of discharge and has a wide temperature operating range.  It also offers real time monitoring and will help mitigate against current battery theft issues being experience with lead acid batteries. We look forward to working with Tesla on other initiatives in energy security”.

Now they are announcing that they will be installing 520 Tesla Powerwalls at 260 Econet sites, with “the first 65 sites to be installed in the coming months.”

Tesla’s energy storage systems are going to make Econet’s network more robust, which is, in turn, going to help people pay their bills and make transactions to keep the economy going.

As for the battery theft issue that Moyo brought up, they decided to put them in cages: 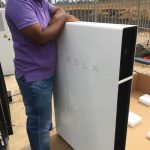 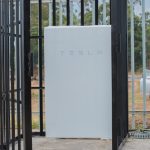 Distributed Power Africa (DPA), which is in charge of the installation of the Powerwalls, also said that Lithium Ion batteries are aslo less likely to be stolen than lead acid battires:

“South Africa and Zimbabwe are amongst the many African countries where increased cases of battery theft have been reported to be the result of frequent power outages in areas with intermittent grid supply. Businesses are looking for solutions to secure reliable energy supply, and the replacement of lead acid batteries with Lithium ion batteries like these is the solution to insure against asset loss and reliable power backup.”

Moyo also said that they could expand their project with Tesla to Econet’s other sites and more countries.

Tesla has also been indirectly helping deploy energy storage and solar in Africa through its participation in an African startup that has already installed hundreds of thousands of small solar+storage systems on the continent.