Elon Musk announced today that due to steady improvements in battery technology, “it will not be long” before Tesla will have new versions of its electric cars with a range of 400 miles on a single charge.

It’s a great achievement, but you probably don’t need it.

During Tesla 2019 Shareholder’s Meeting today, Musk started out his presentation by dunking on Tesla’s competitors – even though he said that he was trying not to do exactly that.

Tesla has been consistently leading in efficiency and range when it comes to long-range full-size electric cars and SUVs.

The CEO highlighted that energy efficiency lead during the presentation: 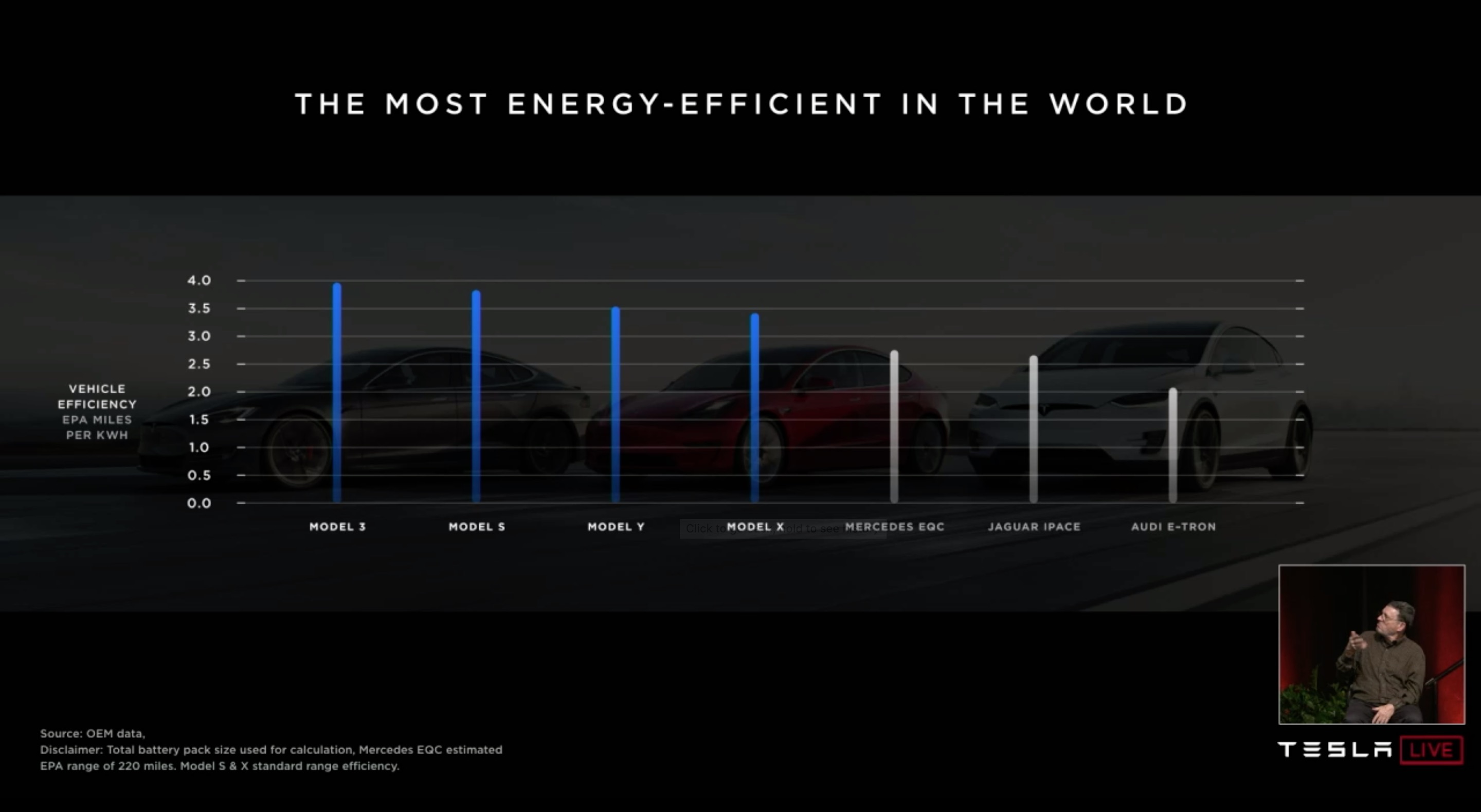 The Hyundai Ioniq Electric is not included in the charge, but you could argue that it is not a “long-range” electric car like the other vehicles listed on this chart.

Musk also highlighted the fact that no other automaker has beaten Tesla’s range from back in 2012:

The CEO congratulated Tesla’s powertrain team for the accomplishment and added that they keep improving.

He said that he sees Tesla having a 400-mile range electric car soon:

I think that “will not be long” could be as soon as by the end of the year.

As we previously reported, there are indications that Tesla is working on a battery pack upgrade for Model S and Model X, which is likely going to result in a range of over 400 miles for the former.

Range anxiety is, for the most part, an education problem and for the little part that is a real technology concern, it’s mostly due to charging capacity and infrastructure – not range.

200 miles of range is more than enough for well over 95% of the population, especially when combined with expansive quick charging networks like Tesla’s superchargers. There are maybe some extreme use cases, like people who do a lot of mileage and long-distances for business, who really need more than that.

The vast majority of trips in North America are less than 30 miles and for the very rare occasions that the average driver travels more than 200 miles in a single day, they generally take breaks (to eat, drink, or other things), which gives opportunities to charge.

Nonetheless, a 400-mile electric car has some advantages. There are still some people who insist that they would never buy an EV with anything less than 400 miles of range, even though, again, they don’t need it.

Tesla could get into that market, but I think it’s becoming increasingly small as the population becomes more educated about electric cars.

Another advantage is that I think Tesla won’t achieve that 400-mile range by adding more energy capacity in its vehicles.

Instead, I believe Tesla is improving energy density and making its vehicles, and especially is battery packs, lighter for the same energy capacity.

In conclusion, while I don’t think longer-range electric vehicles are needed, if the longer range is a consequence of energy density improvments, it then becomes a simple side effect of improved efficiency.