Nearly $3 billion in funding from Volkswagen’s Dieselgate settlement designed to go toward cleaner transportation in the US is being underutilized in EV infrastructure and adoption, according to a recent study which grades all states based on their spending plans. In fact, at least 14 states could see all of their allotted funds go toward diesel vehicle projects.

The stunning study comes from the United States Public Interest Research Group (US PIRG), which gives only 15 states a C grade or better when it comes to policies that can increase access to clean transportation, including electric vehicle charging and electric bus fleets. The rest of the states earned D or F grades.

US PIRG used eight grading categories to come up with its final grade for each state. The categories are as follows:

And here are the resulting grades: 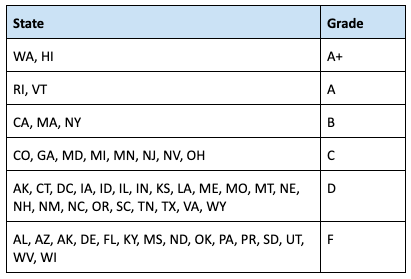 US PIRG actually gave Florida an incomplete grade, noting that it doesn’t have a fully developed and published plan as of yet. West Virginia’s plan hasn’t been finalized, either. But still — there’s not much reason to be optimistic. Sam Landenwitsch, senior vice president for The Public Interest Network, said:

“Volkswagen breached customers’ trust and put all of our health at risk. But the Volkswagen settlement provides states with the perfect opportunity to kick-start the transition to a cleaner and healthier electric transportation system. A lot of good is coming out of how states are spending this money — but many states are not going nearly far enough.”

Washington and Hawaii are leading the pack as the only states to get all eight points on US PIRG’s scale. What does it take to earn that grade? The study notes that A+ Washington “has committed to spending all of the VW settlement funds on accelerating transportation electrification. Most of the money will be spent on electric transit and school buses, some on electric ferries, and the maximum allowable 15 percent will be spent on electric vehicle charging infrastructure.”

Washington received a $112.7 million share from the settlement. The much smaller Rhode Island only gets $14.4 million in funding, but it’s using that money on electric buses and charging infrastructure, earning an A grade.

Wisconsin is used as an F grade case study in the full report. While the state does plan to replace retiring vehicles, there are major questions in how it plans to do so:

…Wisconsin’s current plan receives a failing grade in our analysis in part because neither the state vehicle replacement program nor the capital grant program incentivize or prioritize electric vehicles, which means that a bulk of the award could end up going towards diesel vehicle projects.

Colorado is given as an example of a state that’s at least doing some things right, and it may warrant a higher grade down the line. We reported last month on the state’s plans to use some of its funding to replace diesel buses with electric buses.

US PIRG praises the state for its “robust and detailed set of goals that make clear the state will give special considerations to electric vehicle projects,” but points out that some funding is eligible for fossil fuel vehicles to use. The study does note, however, that:

While the plan itself merits a “C” on this scorecard, the state’s goals and remarks of the new administration of Governor Jared Polis, who came into office after the plan had already been finalized, suggest that the implementation of the plan would warrant a much higher grade.

The report’s summary of what’s going on in Colorado is important to note when taking the entire study into account. These are just plans, and many states have yet to decide what they’ll be funding. Some may have the option to select an electric project over a fossil fuel project:

…even in states that received low grades on this scorecard, there remains the potential that good projects that accelerate electrification could still be funded. So, for example, if a school district in a state that has received a D or an F wants to apply for a grant to fund an electric school bus pilot project, it should still do so. States with poor grades on their plans can still redeem themselves through the projects they ultimately choose to fund.

“Millions of cars will hit the roads this weekend and throughout the summer. Imagine the benefits to the public health and the climate if those were electric cars with zero-tailpipe emissions, or, even better yet, if people had more clean public transportation options, such as electric buses. The Volkswagen settlement can help us get there, but only if states take full advantage of the opportunity.”

Yikes. We understand that some states may actually end up pushing in the right direction, even if their plans look a little hazy. But any state that even includes an option to do anything beyond spending the Dieselgate settlement money on how it should be spent — on vehicles and infrastructure that reduce emissions and pollution — deserves to be branded with a failing grade.

As US PIRG points out, it’s “technically allowable” for states to spend this money on diesel or fossil fuel technologies, but they also say it would be a “wasted opportunity.” We’d go further than that. Considering where the money came from, and what it has the ability to do, spending the funds on anything other than electric vehicles and infrastructure is a disaster.