NVIDIA disputes some of Tesla’s FSD computer claims, but they miss the main point

NVIDIA, formerly a supplier of Tesla Autopilot hardware, is giving the nod to Tesla for ‘raising the bar’ when it comes to self-driving with their announcements yesterday. However, they also dispute some of the claims made by the automaker about its new FSD computer.

But the chipmaker is missing an important point.

Yesterday, Tesla held an ‘Autonomy Day’ for investors during which it made several presentations about its efforts to bring to market a full self-driving system.

You can visit our Tesla Autonomy Event news hub for all our coverage of the series of presentations and announcements made by the automaker at the event.

We posted an article on Pete Bannon’s presentation about Tesla’s new Full Self-Driving computer, which CEO Elon Musk claims is ‘objectively the best chip in the world’.

The computer is replacing Tesla’s Autopilot 2.5 computer, which was powered by NVIDIA chips.

Tesla made a series of impressive claims about their new FSD computer, including comparisons with some of NVIDIA’s solutions: 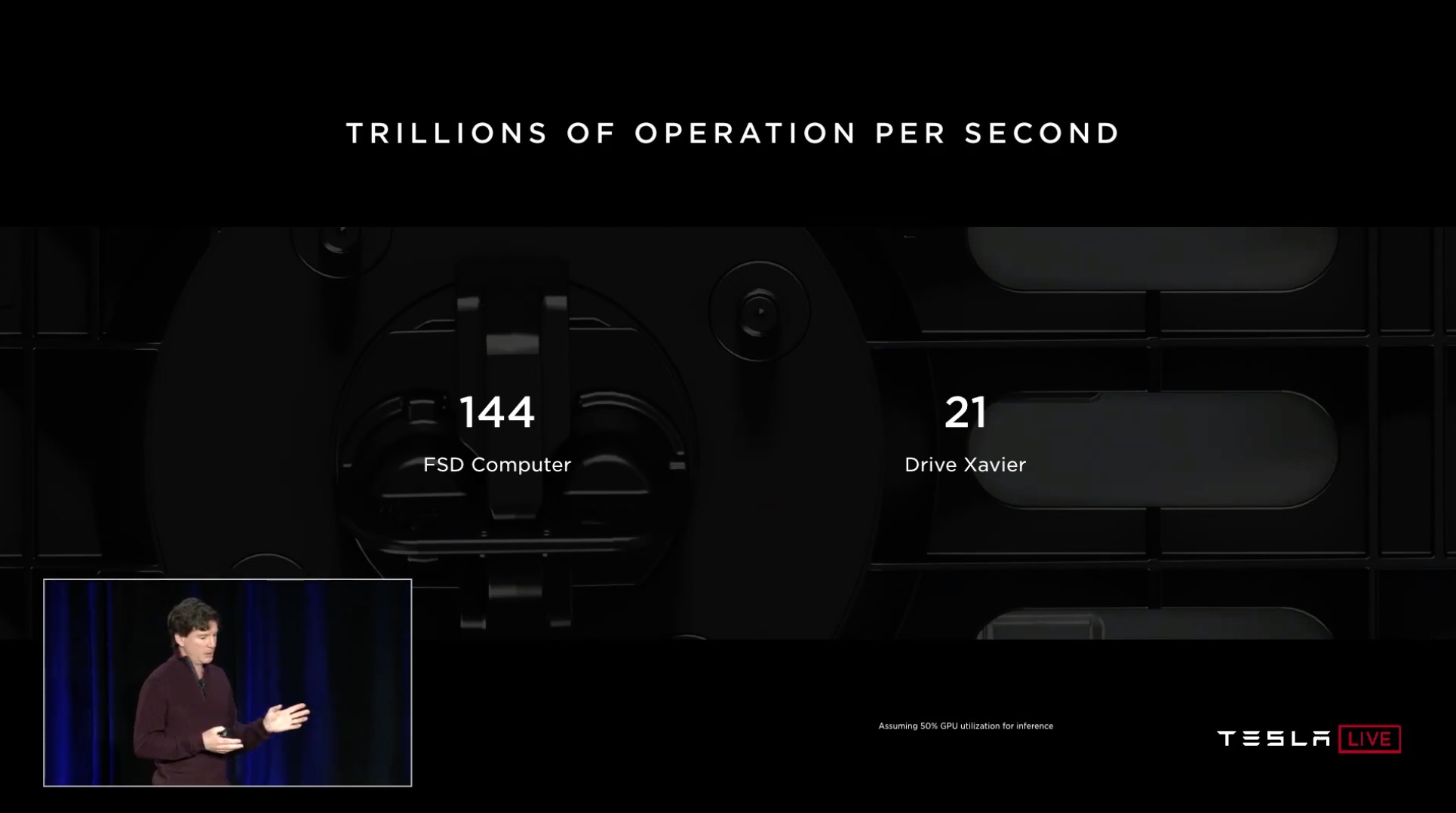 In a blog post titled ‘Tesla Raises the Bar for Self-Driving Carmakers’, NVIDIA claims that there were “a few inaccuracies” in Tesla’s Autonomy Day presentation that they felt the “need to correct.”

“It’s not useful to compare the performance of Tesla’s two-chip Full Self Driving computer against NVIDIA’s single-chip driver assistance system. Tesla’s two-chip FSD computer at 144 TOPs would compare against the NVIDIA DRIVE AGX Pegasus computer which runs at 320 TOPS for AI perception, localization and path planning.”

It’s true that NVIDIA’s AGX Pegasus computer is capable of 320 TOPS, but the chipmaker is making an important point that makes this system virtually useless for Tesla: power consumption.

In its blog post, NVIDIA forgets to mention that its AGX Pegasus computer requires 500 watts, which is more than 5 times the power required to run Tesla’s new FSD computer.

Tesla’s goal is to deliver a network of robotaxis powered by self-driving all-electric vehicles with a low operating cost.

Those electric vehicles need to be hyper-efficient and that’s why they aimed to limit the power requirement of their onboard computer to less than 100 watts.

For the most part, I think NVIDIA’s blog post was fair, but they purposefully left out power consumption, which is too big a part of the story to leave out.

It doesn’t sound like Tesla plans to offer its computer to other automakers and therefore, they shouldn’t be competing directly with NVIDIA.

It’s probably why the chipmaker feels safe to publicly give Tesla props for their work despite just losing them as a customer, but they should also acknowledge the power consumption issue.

Computing power is an important part of the story, but the ultimate goal is self-driving electric vehicles. That’s what will solve the mobility problem.

In order to make that work, you need a balance with high computing power and efficiency.

As far as I know, Tesla is the only one going after an overall solution on that front.