U.S. energy consumption set a record high in 2018, with wind, solar, and natural gas making the largest increases in energy supply, according to a new analysis.

The findings come from Lawrence Livermore National Laboratory, which illustrates the results in its energy flow chart. Overall energy consumption reached 101.2 quadrillion BTU (or “quads”), passing the previous record of 101.0 quads set in 2007. (About 3,400 BTUs equals 1 kWh.) Energy use increased 3.6% from 2017 — the largest annual increase since 2010.

In 2018, solar and wind energy were both up 0.18 quads, representing a 22% gain for solar and a 7.6% jump for wind. In the last decade, LLNL notes that overall renewable energy production has doubled in the U.S. During the same period, solar and wind have risen 48x and 5x, respectively, from where they were in 2008. Combined, they now produce more electricity than hydroelectric power.

Natural gas also jumped 10.7%, increasing by 3 quadrillion BTU from the prior year. The increase in natural gas use reflects an increase in electricity generation. 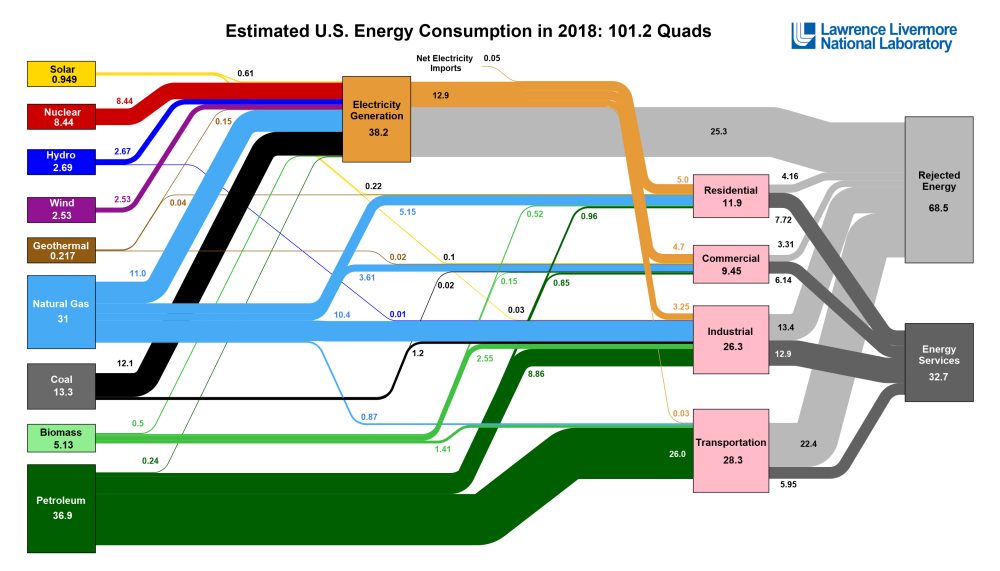 Biomass was up 5%, with most of it used for residential heating. Petroleum (oil) use was up 2%, but “barely budged in the dominant transportation sector,” LLNL’s release notes. As the chart above illustrates, most oil use in the transportation sector ends up as “rejected energy” or heat. Coal consumption fell 5%.

This recent report follows trends seen in a March report from the International Energy Agency which showed global energy demand also grew at its fastest pace in the last decade during 2018, leading to record high CO2 emissions.

Take a look at that chart — the majority of energy consumption ends up as “rejected energy.” As LLNL notes,

This energy most often takes the form of waste heat, such as the warm exhaust from automobiles and furnaces. The efficiency of the nation’s cars, lightbulbs and factories determines how much waste heat is produced and how much fuel and electricity can be put to productive use.

With 26 petroleum quads going to transportation, and 22.4 (86%!) of those transportation quads going right into “rejected energy,” you should have a good sense of why you’re reading about this on a website that covers electric cars and green energy.

Electric engines are over 90% efficient meaning you don’t need to make up the 26 quads of power to go all electric. You really only need 4 quads that is actually used as energy. If you double 2018’s wind and solar output, you are most of the way to replacing all of the transportation energy needed in the US.

The largest single portion of our energy use in this country is petroleum for transportation. About two thirds of the petroleum used in transportation is used for personal vehicles (as opposed to air, shipping, etc.), and the vast majority of that energy is wasted. The easiest way to reduce energy consumption? Get rid of those gas guzzlers and replace them with more efficient electric vehicles.

While the natural gas growth isn’t great news, much of it is replacing is coal and on a per BTU basis, natural gas emits significantly less greenhouse gas than coal. So it isn’t all bad.