Tesla updated its website with a new Model Y teaser ahead of the unveiling scheduled for next week – giving us the best look at the new electric vehicle to date.

Update: Tesla has now also sent out invites to the event with a different teaser image.

We generally have a pretty good idea of what Model Y will look like.

Elon Musk already said that it will look a lot like Model 3.

For people familiar with Tesla’s current vehicle lineup, it is expected to be to Model 3 what the Model X is to Model S – meaning a slightly taller and longer version of the best-selling all-electric sedan.

Over the years, Tesla has released some teasers images of the Model Y and today, the automaker released what appears to be an updated version ahead of the unveiling next week.

It looks like a slightly updated version of the first Model Y teaser released two years ago.

If we isolate the image and we play with the contrast and brightness, we can get a pretty good look at the lines of the Model Y based on this teaser image:

As you can see, the Model Y still doesn’t feature any side mirrors, which is still not legal in the US, but there’s an effort to change that.

The Audi e-tron has been introduced with virtual side mirrors, which consists of cameras and screens replacing the mirrors to reduce the surface outside the car for better aerodynamic performance.

The system was approved in Europe, but they are still working to make it legal in the US, where the e-tron will be available only with side mirrors for now.

It has the potential to increase the efficiency of vehicles and therefore, the range.

Update: Tesla has now also sent out invites to the event with a different teaser image. It now has the side mirrors: 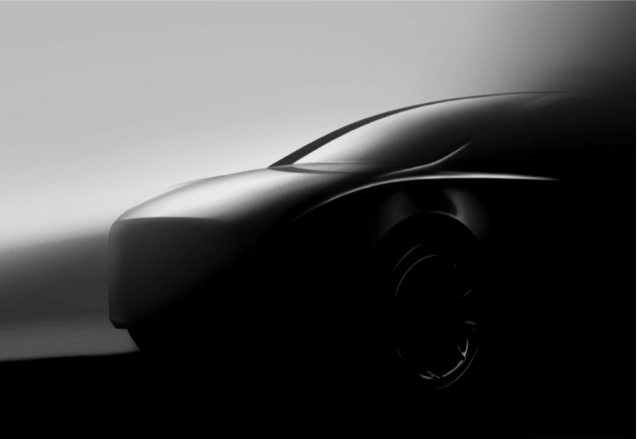 Model Y is going to be unveiled at Tesla’s Design Studio in Hawthorne, California at 8pm PDT.

I don’t expect to be surprised by the Model Y design. Like I wrote above, it sounds like it’s going to be to the Model 3 what the Model X is to the Model S.

That said, I think the Model 3 design will translate well into a small SUV/crossover vehicle and even though it won’t be anything surprising, it should still be quite stunning.

As for the lack of side mirrors, maybe Tesla and Audi can team up to try to push that with US regulators.