Spanish automaker SEAT unveiled its new Minimó all-electric concept car at the Mobile World Congress today. A report claims there may be a production version of the vehicle in 2021.

Minimó is a small two-passenger electric vehicle with an integrated battery swapping system. It could be fully charged within minutes, with a range of more than 100 km (62 miles). SEAT calls Minimó an electric vehicle “that combines the best of a motorcycle and a car.”

“This is the solution that carsharing companies have been waiting for, a model that will be key for improved profitability of this type of companies. The concept we are presenting today responds to the needs of both cities and carsharing providers.”

Auto Express reports that SEAT plans on making a production version of Minimó in 2021. The report notes SEAT “is currently preparing the Minimó for Level 4 autonomous driving.” A plug-in model is also reportedly a possibility.

The Minimó concept is 2.5m long and 1.24m wide and can fit in a motorbike parking area. SEAT plays up the technology aspects of the vehicle in its announcement, noting Minimó would include built-in 5G connection. One interesting feature is its ability to recognize “whether the driver is 16 or 18.” It can adapt its top speed to either 45 or 90 km/h (28 or 56 mph), depending on driver age. 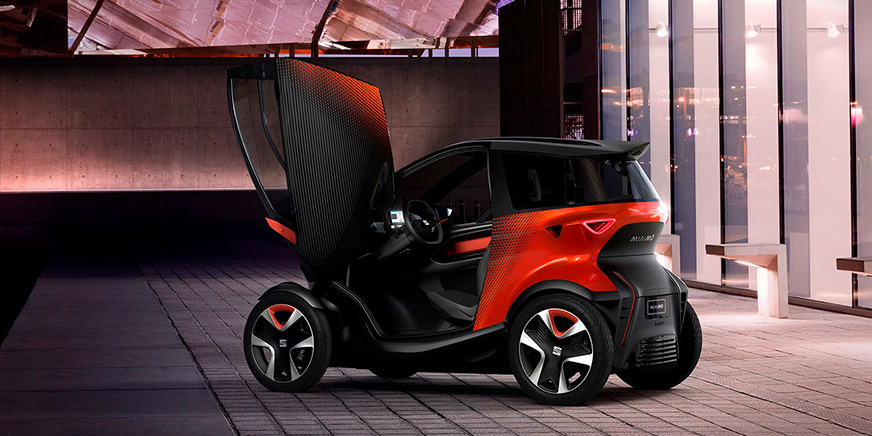 SEAT clearly has an eye toward urban mobility in the future — the company also unveiled its eXS electric scooter last year. Minimó’s release states that “SEAT has been chosen as the lead brand within the Volkswagen Group to define the strategy and offer products geared towards urban micromobility.”

SEAT’s Minimó is similar to Citroën’s Ami One Concept, a small two-seat concept that Citroën will present at the Geneva Motor Show next month. But it’s more reminiscent of the Renault Twizy, an electric two-seater that’s been on the road for years. The Minimó’s 56 mph top speed would also position it closer to the Twizy than the Ami One.

On that note: Lime, best known for its scooter rentals, recently introduced its LimePod car sharing program in Seattle. The company is currently using branded Fiat 500e cars in its program, but a prior report indicated Lime could also use the Renault Twizy.