Here are some of the cheapest Tesla vehicles used and new (Model 3, Model S, Model X, and even Roadster) that you can buy today.

One of the most frequent questions I get asked all the time is “when will I be able to afford a Tesla?”

I can’t really answer that question since it depends on many more factors than just the price of Tesla vehicles. I myself probably bought a Tesla before I could really afford one on a sound financial basis.

But what I can do is help you get an idea what the cheapest Tesla vehicles look like on the market today and look at what is good value (for specific vehicles, you’ll have to look at what is available in your region).

If you want something new, that’s the cheapest it gets right now when it comes to Tesla.

The Mid-Range Model 3 starts at $42,900 before incentives and an argument can be made that it’s a pretty good price.

In places where there are incentives, like New York and California, where you can combine federal, state, and local utility incentives, the Model 3 Mid-Range ends up costing you about $36,000 after rebates.

That’s not the base $35,000 before incentive that Tesla has been promising, but I think it offers a lot more value actually.

There’s no guarantee that all those incentives will still be available when the $35,000 base Model 3 becomes available and you also get more range and a more premium interior.

That’s more a “something to watch category” than anything else.

The market is still small and not many early Model 3 owners want to sell their cars.

You will be able to find some Model 3 Long Range RWD in the mid-$40,000 and some of them would represent decent deals depending on the mileage, but I think a new Mid-Range Model 3 makes more sense if you can take advantage of incentives in your region.

Here you can find some great value deals for the cheapest Tesla vehicles with some digging.

I own a used 2012 Tesla Model S P85 Signature and I still love the car so I’m a little partial to a used Model S.

Now there are not that many 2012 Model S sedans out there,  but there are plenty of good deals on cheap 2013-2014 Tesla Model S vehicles.

You will be able to find some of those Tesla vehicles for less than $30,000, but we are talking about some high mileage vehicles:

I think some of those vehicles could be great buys in my opinion, but you have to keep in mind that it is on a case-by-case basis and you are going to have to check those vehicles in person to make sure they are OK.

Those cheap Tesla vehicles are often still on their battery and powertrain warranty, but the overall car warranty has run out on those cars.

It can be worrying considering the reliability reputation of Tesla’s early Model S sedans, but I would keep in mind that Tesla did a great job fixing those early vehicles.

Most of those cars spent a lot of time in service during the first year or two and now the repairs are holding up.

In my own experience, I had no major issue with my 2012 Model S over the past 2 years. I only had to fix minor things with my trunk latch and charge port latch.

Therefore, I think you can get a decent relatively cheap Tesla vehicle on the used market, but you’ll to do some research in your region.

I won’t waste any time here because there’s nothing “cheap”.

Model X didn’t arrive on the market in decent volumes until 2016 and even then the production ramp up was slow.

It results in not that many vehicles available on the used markets and on top of that, they are holding their value fairly well after 2 years.

We are not talking about anything really cheap here either, but it’s still more affordable than a used Model X.

You will be able to find some options (though with higher mileage of course) for less than $50,000: 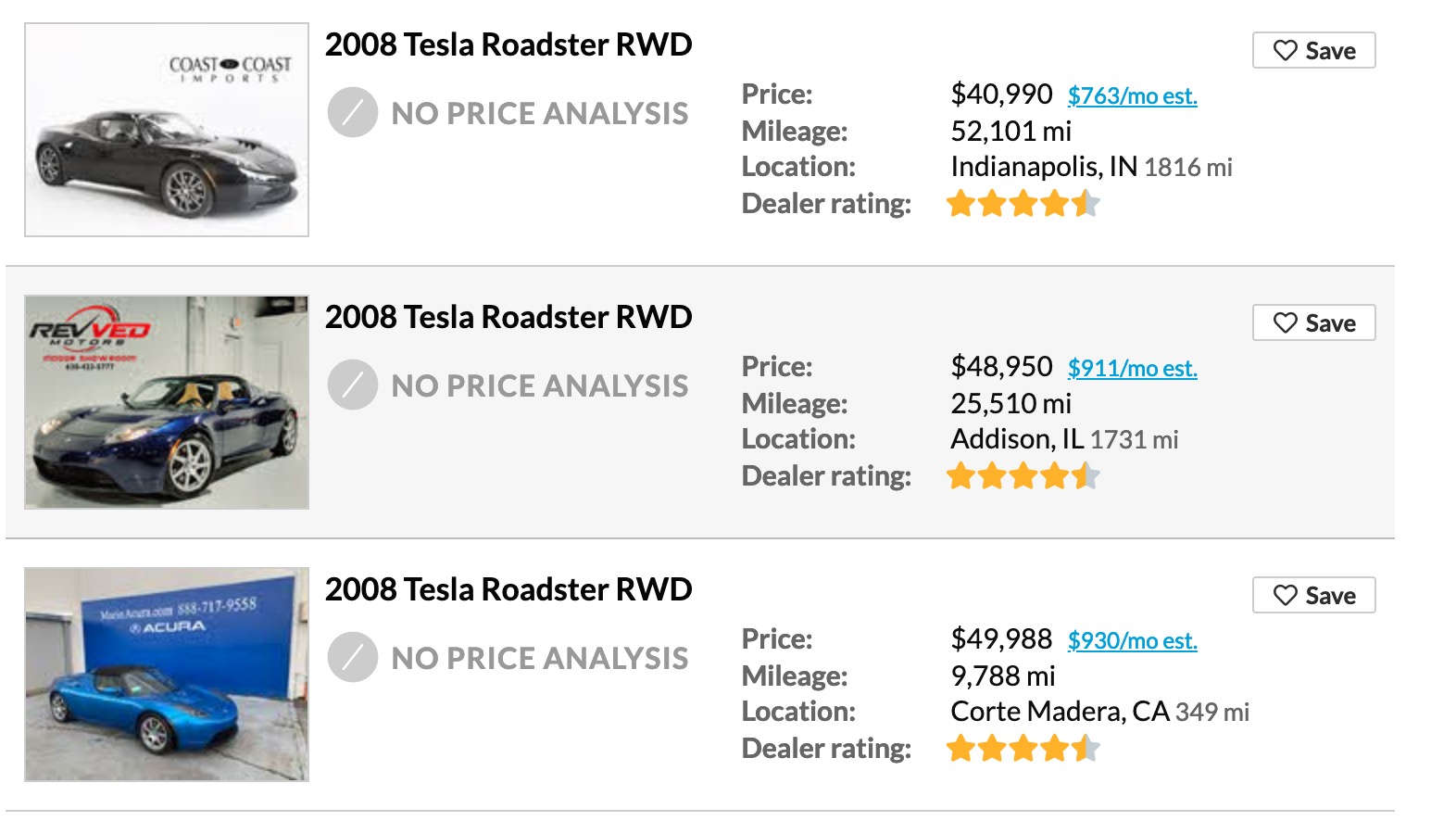 Now you can’t expect all the technology and comfort found in modern Tesla vehicles, but there are other things to like about the original Roadster.

As we noted in our Tesla Roadster 3.0 review, it’s still a very fun and exciting car to drive and it’s the electric car that sparked the electric revolution in the opinion of many.

Now it’s not really about saving money since it simply can’t be your main car for most people, but I think it will hold its value well over the next few years so it’s not necessarily a bad idea as a second car if you want to own a relatively cheap Tesla.

Have you managed to find a fairly cheap Tesla vehicle? Let us know in the comment section below