Solar jobs in the U.S. dropped for a second straight year in 2018. But overall trends in the industry are largely positive, as detailed in a new report.

Numbers come from the National Solar Jobs Census for 2018, a comprehensive report released by solar advocacy organization The Solar Foundation. As of November 2018, there were about 242,000 solar workers nationwide, down from 250,000 in the previous year.

Two key factors for the decline were cited in the report, with the Trump administration’s solar tariffs listed first. As the report states:

“While not as severe as they could have been, the tariffs (coupled with other newly-imposed tariffs on steel and aluminum) still increased hardware costs above baseline expectations and restrained industry growth.”

The report also cited some state policies and economic challenges as a key factor in the decline. Notably, the report expects jobs to increase again in 2019, citing “a backlog of utility-scale projects and new policy incentives in key states.” 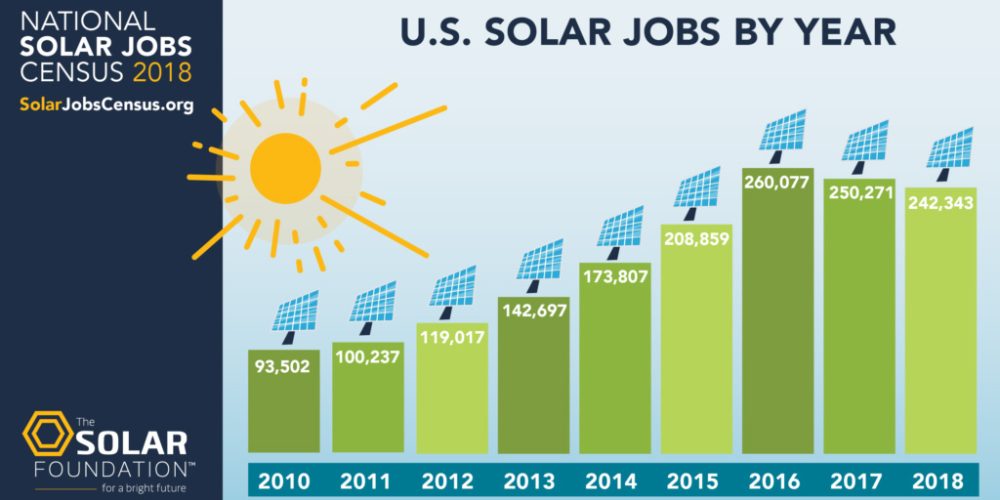 California lost the most solar jobs — nearly 10,000 in the past year. However, the Golden State claims about 40 percent of the country’s total capacity, and still has “by far the most jobs nationwide.” But the state may also face more short-term obstacles with the recent PG&E bankuptcy filing. Massachusetts also lost more than a thousand solar jobs. Overall uncertainty and state policies were key drivers of the losses.

Losses were offset by growth in other states, including Florida and Illinois. Both of those states added more than 1,000 jobs.

The big trend over the long-term, however, is still one of growth. In the most recent five-year period, from 2013 to 2018, solar employment increased 70 percent nationwide. So even with recent losses, the industry added about 100,000 jobs during that time.

Additionally, despite the recent decline, respondents to the survey predict a bounce-back in employment this year. The report estimates a 7 percent employment gain in 2019, which would place total employment numbers back in the range of 2016 — the industry’s peak year thus far.

Solar hardware costs continue to decline, and more states are considering — or already initiating — solar-friendly policies. National trends are also positive. Any possible legislation that could eventually come about as a result of the Green New Deal would almost undoubtedly benefit the industry. But the report points out that current progress is still too slow:

“While these are reasons for optimism, the urgent challenge of climate change means the progress we have seen to date is not nearly enough. Solar energy will need to develop and expand even faster in order to reduce carbon emissions to sustainable levels. If this can be achieved, a host of additional benefits will follow, including new solar job growth.”

Despite the recent job decline, 26 percent of solar companies claim it is “very difficult” to find qualified candidates for open positions. “Lack of experience or technical knowledge” was far and away the reason most cited by employers for hiring difficulties. More than half of respondents cited lack of experience as a problematic factor.

Solar employers are upfront about the challenges they face when it comes to experience. But that hasn’t caused a trend in hiring more workers who are new to the industry. Employers required previous experience for 60 percent of all new hires in 2018, a 5 percent increase from 2017.