Fuel shortages are hitting Mexico after the closure of state-owned pipeline creating a distribution bottleneck and Chevy intelligently took advantage of the opportunity to promote the all-electric Bolt EV at gas stations.

Since fuel distribution shifted from the pipelines to trucks in 2019, it created shortages and long lines at gas stations.

Chevrolet’s Mexican marketing team saw an opportunity to market the Bolt EV and decided to bring the electric car to those gas stations in order to educate people about the possibility of going electric.

“We had a Bolt EV available, with a charged battery and we decided to go out into the streets last weekend [..] People started asking us about the Bolt EV, its range, price, maintenance and battery life,”

The company also launched a social media campaign to present EVs as a solution to your fuel problems: 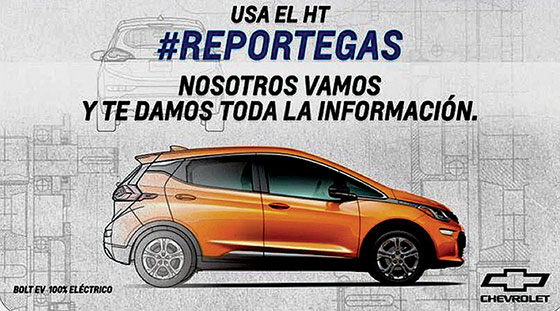 The electric vehicle market is still very small in Mexico where fewer options are available than in other North American markets.

Fewer than 20,000 electric vehicles (HEV, PHEV and BEV combined) were sold in the country last year.

Some of the main complaints about electric vehicles are charging time and access to charging stations.

While those issues are based on some truth, most EV owners found them to mostly be misconceptions since most charging ends up happening at home and overnight.

EV charging infrastructure certainly needs to expand and it is expanding, but I think this is a good reminder that the fuel supply chain is also itself quite fragile.

Smart move by Chevy to capitalize on that and market the Bolt EV to those waiting in line for gas.

Unfortunately, I don’t think that we can change most people’s habits based on convincing them to make better choices for the environment. I think we need to show them that EVs are actually better and more convenient.

That’s the best path to EV adoption in my opinion.