Daimler’s Freightliner aims to be “frontrunners with electric trucks” and offer all-electric options to compete with Tesla Semi.

Now it has delivered its first all-electric Freightliner truck to Penske Truck Leasing Corporation as part of its ‘innovation fleet’.

Daimler, one of the world’s largest truck makers, has been feeling the pressure from Tesla’s electric truck – going as far as saying that if the claims Tesla is making about its electric semi truck are true, they are breaking the laws of physics.

While it competes with the Tesla Semi in size and capacity, it still has a limited range compared to the Tesla Semi: 250 miles vs 500 miles.

Daimler said that it would a deliver fleet of eCascadia electric trucks to partners by end of the year – beating Tesla’s 2019 target.

Today, the company announced that it is delivering its first fully-electric Freightliner truck and “fulfilling its promise to put an electric commercial truck in customer hands in 2018,” but it’s not actually the eCascadia.

It’s the smaller eM2 106 medium-duty electric truck that they unveiled at the same time as the eCascadia.

The company describes the vehicle:

“The Freightliner eM2 106 is intended for local distribution operations and last-mile delivery services. The batteries of the new electric version provide 325 KWh for up to 480 hp. The range of the eM2 is around 370 km (230 miles). The batteries can be recharged to around 80 percent within 60 minutes, sufficient for a range of around 300 km (184 miles).”

Here’s a picture of the all-electric Freightliner eM2: 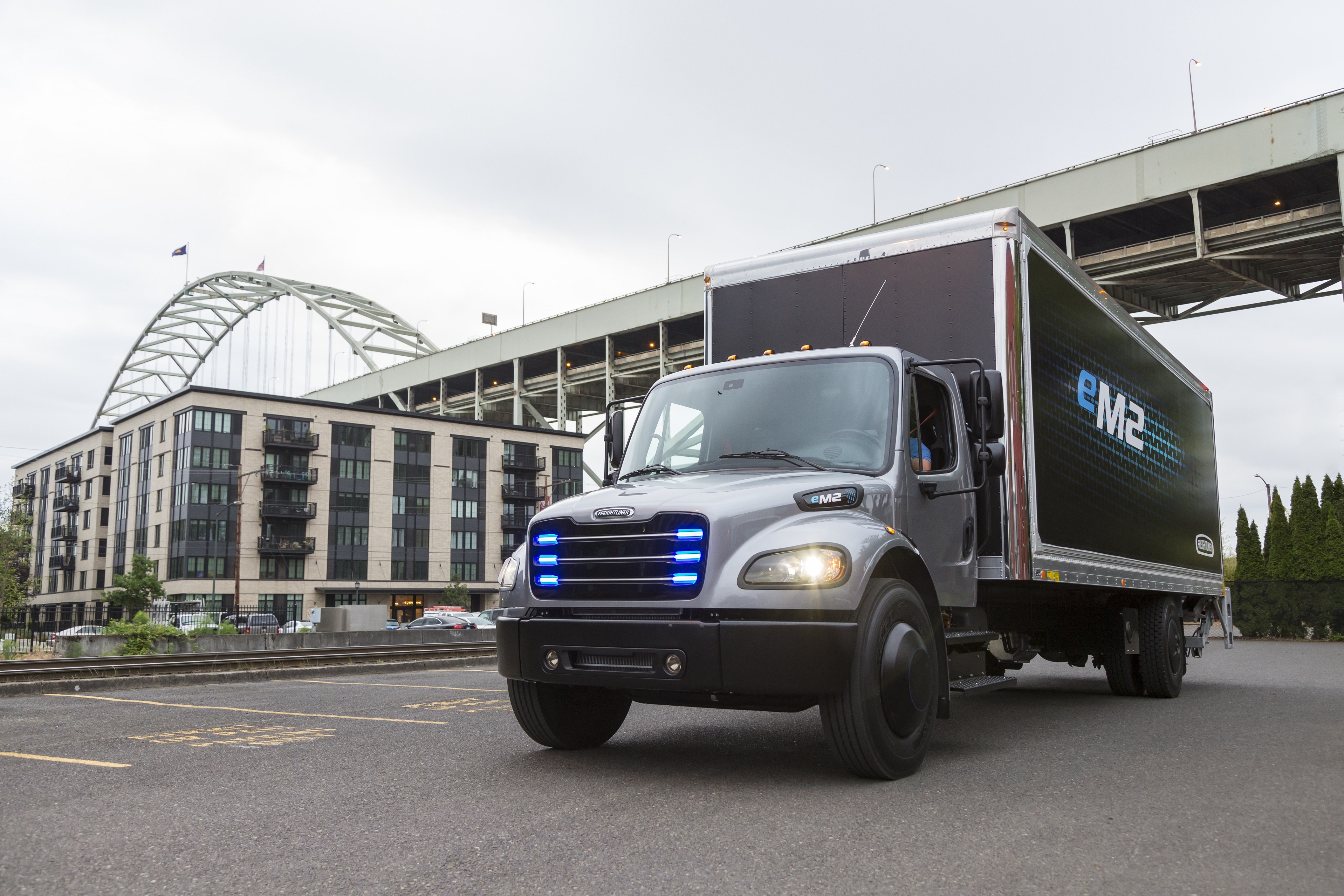 Brian Hard, President and CEO of Penske Truck Leasing, which operates over 270,000 trucks, commented on the delivery:

“Penske is honored to be the first company to put this new medium-duty electric truck into service. I commend and thank Roger Nielsen and his team at Daimler Trucks North America for their outstanding collaboration and spirit of co-creation with us over the last nine months to bring this innovative technology to market. Penske is committed to providing the most effective vehicle technologies to our customers and driving innovation and sustainability when it comes to mobility.”

“We aim to be frontrunners with electric trucks just as we are with conventional trucks – and we deliver on this objective once again: With the hand-over of our Freightliner eM2 to Penske Truck Leasing Corporation, we now test electric trucks in all segments in day to day operations with our clients worldwide. When it comes to innovations the demands of our customers are pivotal for us. Together we develop solutions for the future of trucks. We’ve got news coming already in January: At Las Vegas’s Consumer Electric Show we are going to announce further commitment of our next steps in another key technology: automated driving.”

Daimler has also been releasing other electric trucks through its other truck brands.

For example, the company had already unveiled the FUSO eCanter program, a small electric truck meant for urban routes with a range of only 100 kilometers (62 miles) and a load capacity up to three and a half tons, and a bigger all-electric eTruck, which has a 26 ton capacity, a massive 212 kWh battery pack, and ~125 miles of range.