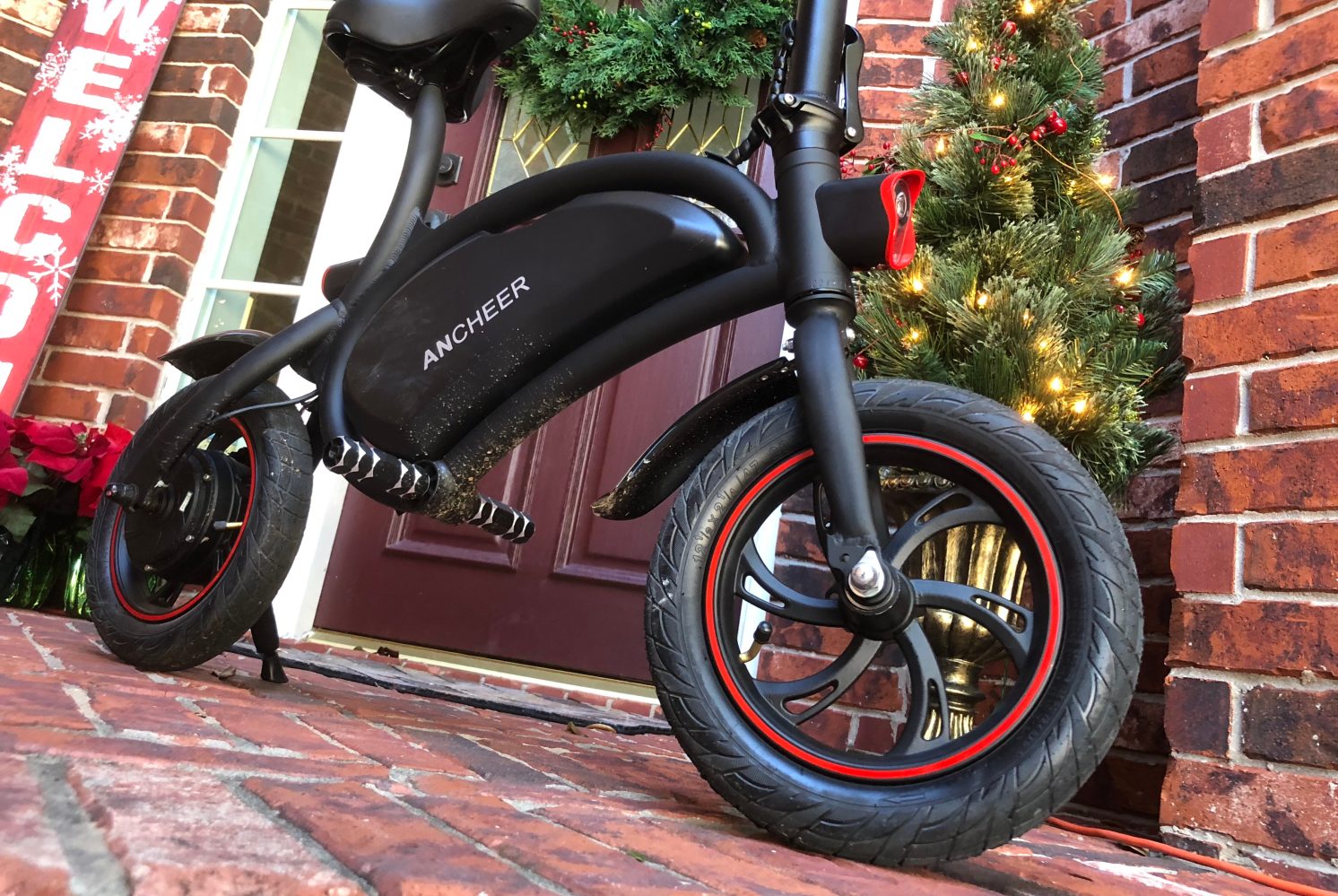 I work at home, and it so happens that I live in a one vehicle household at the moment. It’s been a good thing for our current situation for a variety reasons, but it does come with some downsides. There are those occasions where it’d be nice to be able to get around town when I don’t have access to a vehicle, and for that reason, I was excited to check out my first e-bike/e-scooter, the Ancheer “folding electric bike”.

You might think this bike looks familiar, and that’s because we’ve reviewed another e-bike/e-scooter that’s seemingly built on the same generic package. That one’s called the Jetson Bolt, and while it has a lot in common with this Ancheer e-scooter (go check out Micah’s review of that one if you haven’t already), it also has some minor differences.

One of the first things to address with this bike, like the Jetson “bike”, is what it actually is. It’s definitely a stretch to call it a “bike” since it doesn’t have any manual assistance or pedals. But it’s probably not entirely accurate to call it a scooter, either — with the “scooter” label, most would probably think of a primarily standing ride with two smaller wheels. This is a far more comfortable and leisurely ride than the Bird scooters littering cities these days.

This little bike sits somewhere in the middle, but I’m inclined to lean on the scooter side. It’s basically a bike-like scooter with slightly more substantial wheels, a seat, better range, and perhaps more torque.

I’ve never reviewed, owned, tested, or even rode an e-scooter/e-bike before, so you’re getting the unique perspective of someone who is entirely new to this space. I’ve long been a hobby cyclist, but to say that this kind of “bike” is a new experience for me would be an understatement.

As someone who does have some level of experience with bikes (both my own and those I’ve bought for my family), though, I know that ordering them online and assembling them can range from being a total breeze to being a major patience learning exercise. I’m happy to report that this Ancheer bike definitely fell into the former category. 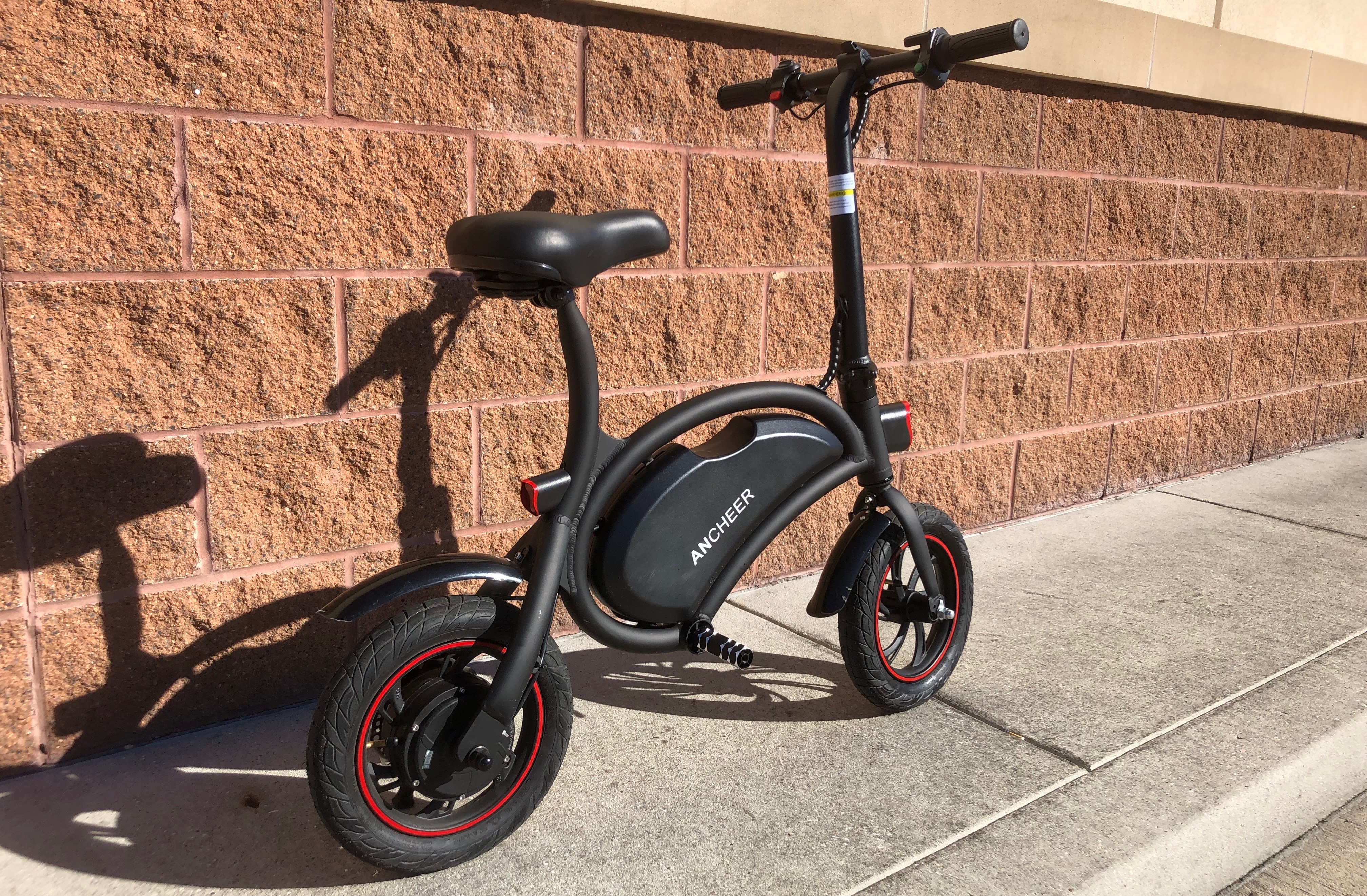 The bike, presumably thanks to its already compact size, will arrive at your doorstep almost entirely pre-assembled. You’ll just open up the box (about the same size as the box for your average unassembled adult bicycle, by the way), cut away all the extra packaging that’s there to keep it safe in transit, fold up the main steering stem, screw on the pedals, fill the tires to 30 PSI, and you’re basically good to hop on and go.

That was a great first impression for me because, in all honesty, assembly was one thing I was least looking forward to. I was able to jump on this bike and take it for a spin — it even arrived with about 50% charge on the battery — within just 15 minutes of it arriving at my doorstep. So if you’re looking for instant gratification as a major factor with your e-scooter decision, this is a good pick.

The Ancheer e-scooter is pretty lightweight at only 27 pounds, mostly weighed down by its 350-watt motor and a 36V, 6Ah battery. Ancheer says it can handle up to 265 pounds.

Ancheer rates the range on this bike at around 12 miles (well, 15 miles on their website and 12 miles on Amazon — it’s not entirely clear). I’d say that’s about what you’ll get out of it before you start to notice it’s suffering in performance. As you might expect, too, it’s obvious that the bike has the most satisfying torque when it’s right off the charger — but it goes full power for a while before you start to feel it losing strength. I noticed it struggling a lot trying to go up a steep hill after traveling about 8 miles, but that’s to be expected. In all honestly, I was impressed by its performance and how long it managed to keep kicking.

In terms of electronics and features, the Ancheer e-scooter/bike has a horn (which is loud and obnoxious enough that cars or pedestrians would probably notice it from a quarter mile away), a cruise control feature, and even has app-based security. That app doesn’t have good reviews and doesn’t seem to be well-maintained, so I personally wouldn’t depend on it day-to-day. I didn’t even test it out for those reasons, truthfully.

The cruise control works well. To accelerate, you simply twist the right handle. Given the bike has such low speed, you’ll probably most often treat this handle as a binary on-off switch rather than fine-tuned control of your acceleration. I found most of the time that I was just going full-throttle. Pulling the throttle and hitting the cruise button will let you relax the throttle and cruise, and cruise control automatically turns off if it detects that you’re suddenly braking — so that’s good. 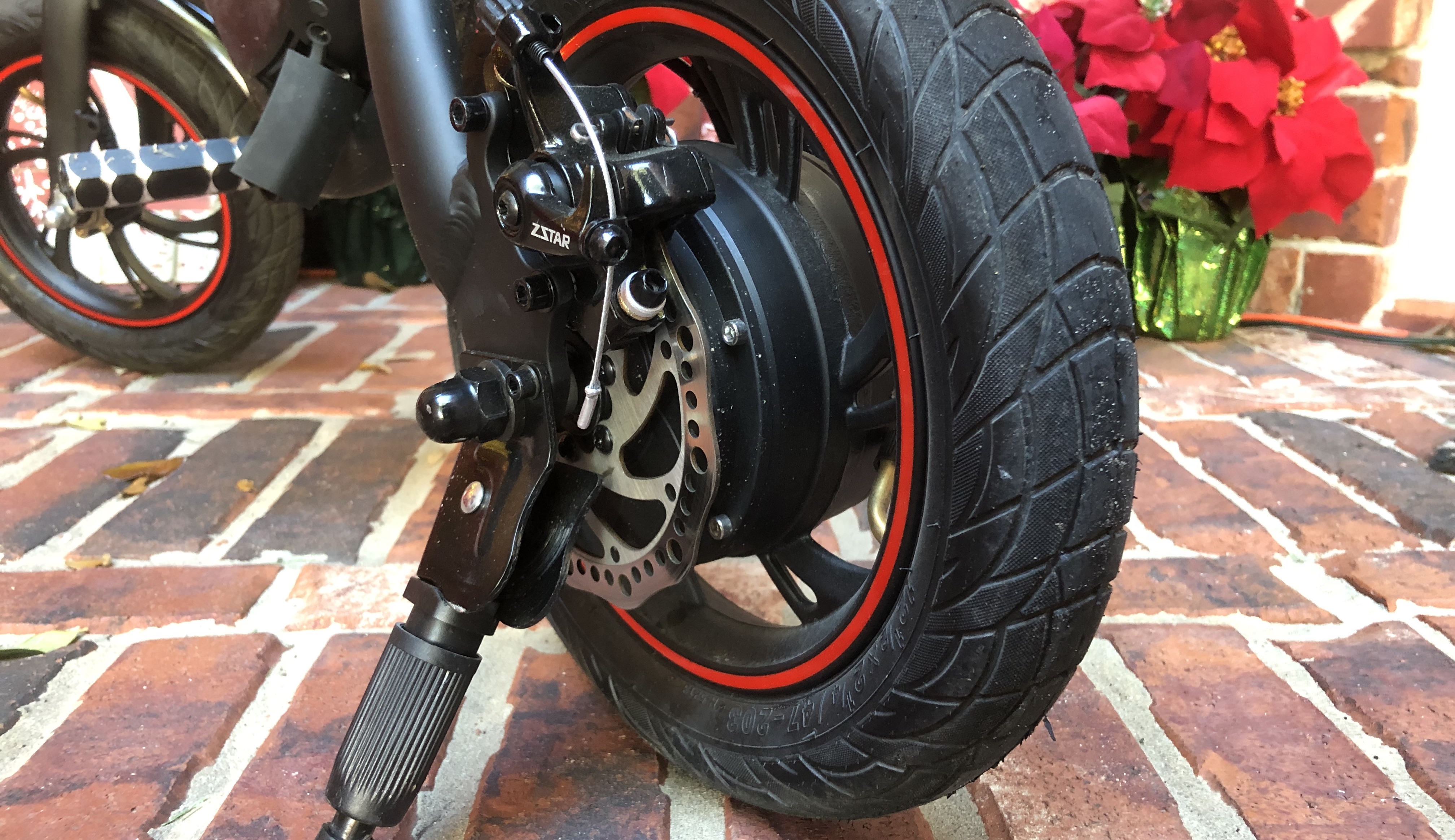 Speaking of the brake, there’s a simple mechanical brake mechanism on the rear wheel (which seemed to work well and required no tweaking out of the box).

The bike also has both a front bright headlight and a red brake light on the back. These are both likely satisfactory to meet any requirements for lights you might have in your area for night riding, although there is one annoying aspect of these lights. To turn them on, you have to hold the horn (which, as I mentioned, is loud) for several seconds as it blares at full volume to turn them on. Same for turning them off. This can be confusing for cars or riders around you, so keep that in mind.

There are a pair of splash guards on both the front and back wheels, and riding this bike on a rainy December morning left me with little to no sprays of water coming off the wheels. Ancheer also says the bike is rated at IPX5 as a whole, so you shouldn’t really be too concerned with normal water exposure at all — unless it’s absolutely torrential downpour, in which case you probably wouldn’t be riding this anyway.

Finally, the portability of the bike is great. The folding mechanism made what would have been a somewhat tight fit in the trunk of my Toyota Corolla a breeze, and it’s light enough (not to mention has a handle, which is great for both carrying and locking it up with a U lock), that transporting it is a complete breeze. The built-in kick stand is also handy.

But how does it do in terms of its actual ride? Like I said, I don’t have much experience with other products in this category and I’ve never even ridden a moped. But I can say that I was pleasantly surprised with the amount of power this thing could put out and how long it lasted. The LED lights near the accelerator can give you a pretty good gauge of how much battery you have left.

The 12 miles that Ancheer quotes was about accurate in my eyes, and I didn’t really have to worry about dying batteries or charge time in my tests. With that much range, I was able to do any riding I needed to do for the day on a single charge, so as long as you remember to plug up at night, you should be good for just about any reasonable city commute use case.

The scooter-like aspect of this device definitely comes out when you’re riding on poorly paved roads. The tires are obviously small, and there’s no suspension like you’d find on some higher end pedal-fitted e-bikes, so you might find yourself slowing down to hit some of the larger bumps you might encounter in the road. For that reason, I found myself sticking to the sidewalk most of the time. But that can also be problematic anywhere riding motorized vehicles is outlawed on sidewalks.

This bike serves its purpose well, and you get a lot for relatively little cost. It’s definitely more powerful than your average Bird or Lime e-scooter, but not nearly as powerful as a higher-end e-bike. You get the best of both worlds here, since you get to sit on it and it weighs little enough that you can pop it in your truck and take it with you if you go out of town.

Primarily though, this bike is probably best suited to be a quick commuter ride for those who live in a flat city. It can handle small hills if you are on the lower-end of its weight capacity, but flat, smooth roads and sidewalks are where you’ll want to stay with this bike to get the smoothest ride and the full range.

One thing I noticed riding this bike, at least in my small town, is that it gets a lot of attention. I had several people roll their windows down as I rode on the sidewalk to ask what kind of bike it was and where I got it. Depending on who you are, that attention might be an upside or a downside. On the other hand, the bike might be considered a bit unfashionable by some (my wife doesn’t want me to even be seen riding this thing). I personally don’t see it as particularly dorky.

Another thing you might want to consider is how this “bike” might be legally classified in your jurisdiction. Laws vary state-to-state, and while I personally didn’t have any issues riding this in the bike lanes in my small town over the course of a couple weeks, a pedal-less motorized vehicle might not be allowed in some other places. And in yet others, you might not be able to ride this on a sidewalk. 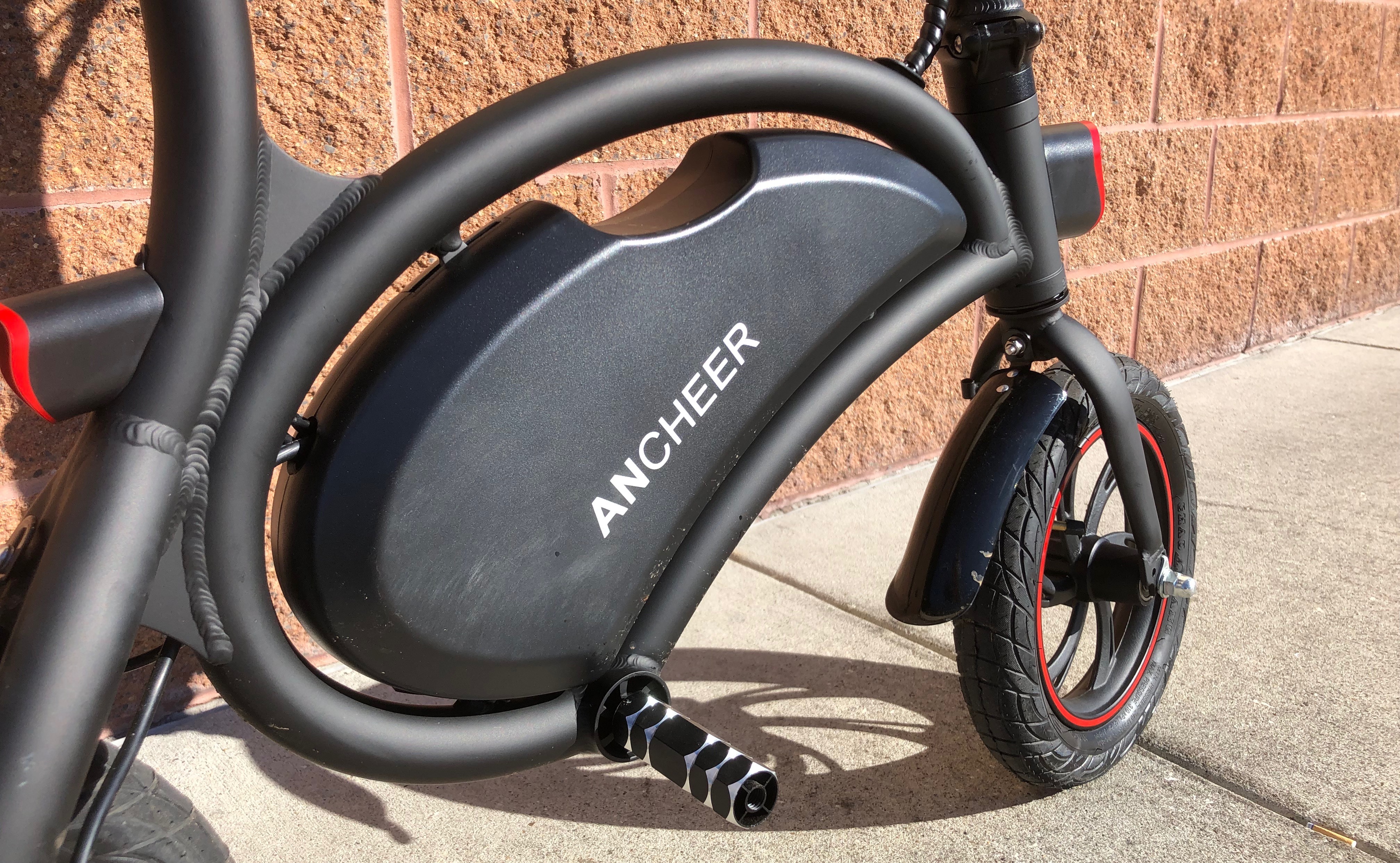 The quality — both of the bike itself and its electronics — isn’t anything to write home about. It’s fairly obvious that this is a generic package that’s been tweaked a bit. But you’re paying a bit under $400 for this, and if you’re concerned with quality of components, it’s worth noting that the bike comes with a one-year warranty for the electric motor, battery, and charger. So you’ll have that peace of mind at least.

Either way, the bike comes at a price — about $390 on Amazon + $20 for shipped, or $39 off w/ code 38S6TEE4 before 12/30/18 — that’s definitely on the lower-end of the e-bike/e-scooter space, and it’s a solid commuter option for those looking for a way to get to and from their workplace in minutes without breaking the bank.