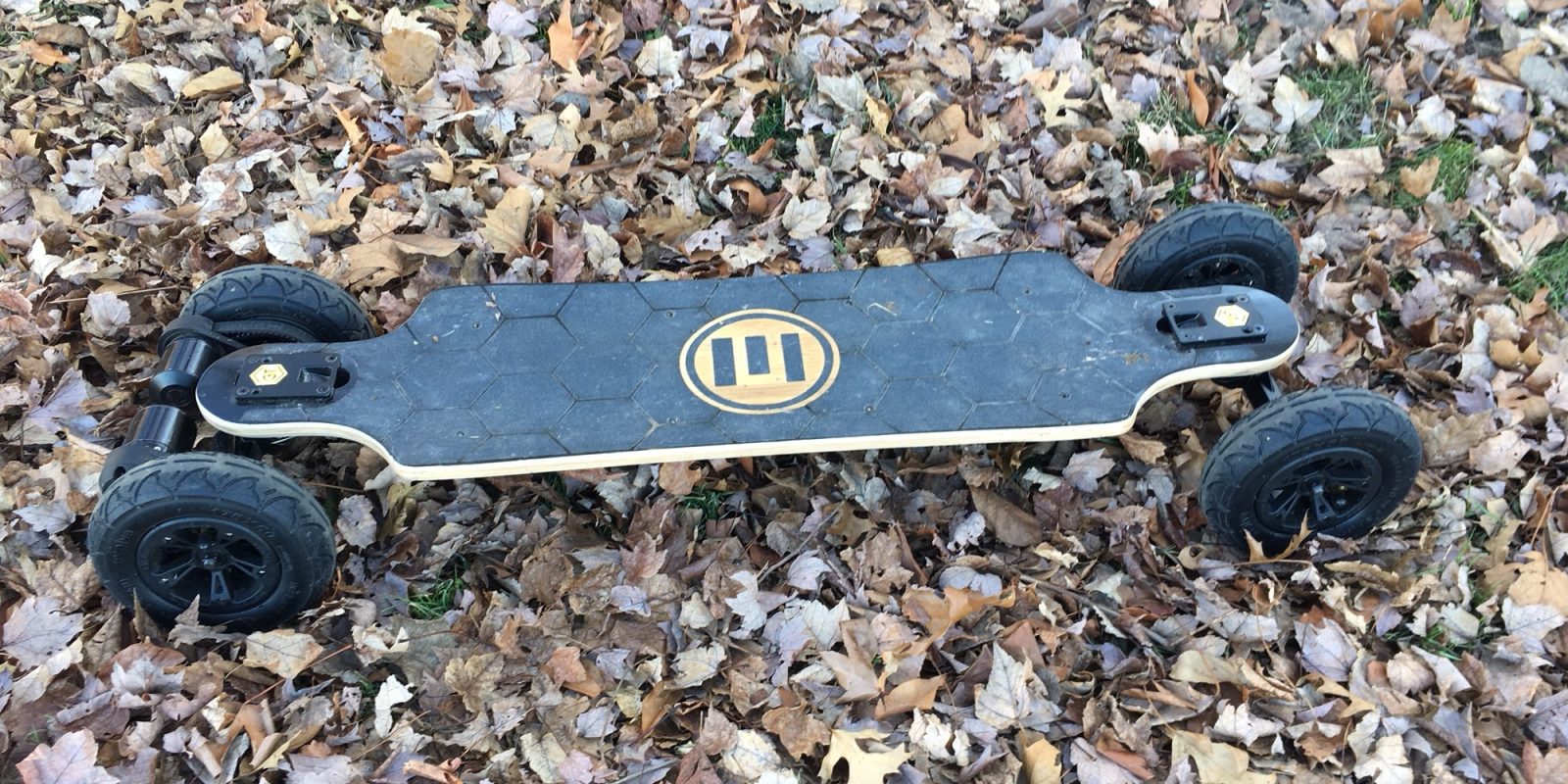 Simply put, the Evolve GTX all-terrain is a monster of an electric longboard.

To get that power to the ground, the motors use drive belts to power the 6.5″ inflatable wheels. I had a bit of an issue with belt alignment on one wheel, but the board gives you adjustment options to dial in the belts if they get finicky.

In addition to the smooth and pleasantly springy ride provided by the bamboo deck, the inflatable wheels provide even more damping when riding over uneven terrain. More on that in a moment.

Those powerful motors can propel you up to around 25 mph (40 km/h) on the street or around 22 mph (35 km/h) on off-road trails. That’s plenty fast to make you question your sanity.

There’s a high-capacity flush-mounted battery pack to support such high power. And despite the energy hogging all-terrain wheels, the board still gets an impressive 16-18 miles (26-29 km) of range on the street in lower power modes. Move up to the highest power mode and your range will drop to around 10 miles (16 km) though.

Off-road, range is a bit less, falling somewhere between 8-14 miles (13-23 km) depending on riding mode and type of terrain.

The board includes a comfortable remote that has a sharp-looking LCD screen. There you’ll find battery readouts for the remote and board as well a speedometer, board diagnostics, mode readout and other data points.

This longboard is hilariously powerful. I started on the middle power levels for the first few minutes just to acclimate to the new board. But quickly I was itching to feel full power, so I bumped up to GT mode, which removes all of the power limits. Having gotten used to medium power, I nearly ate dirt as soon as I pressed the throttle on the remote control. Time to readjust my expectations.

Bending my knees and bracing myself more appropriately for 3,000 W of power, I took another stab at it. Firmly planted, I went cruising around a grassy field, flying over bumps like they were nothing!

Just for fun I would aim for tree roots, divots, fallen branches, piles of leaves and anything else that would normally throw off even an expert rider on a normal electric skateboard. But the Evolve GTX All Terrain just kept asking for more. It was like I was snowboarding, but without any snow. And uphill.

Speaking of snow, a few days after my first tests we had a light snowfall. That proved to be a great chance to try out the Evolve GTX in some new terrain. 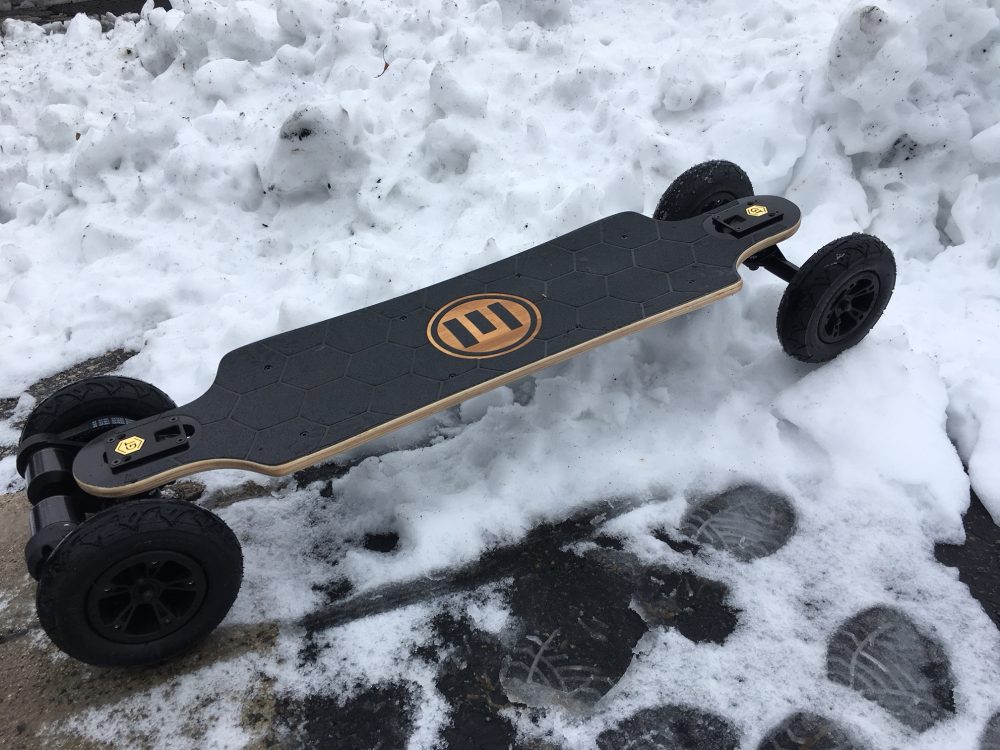 The company says that while the board is technically waterproof, they don’t advertise it as such because they don’t recommend riding in wet conditions for safety reasons. And you definitely shouldn’t – wet riding is dangerous. But I owe you guys a good review, so I put my life on the line for you all to give you a thorough review. And oh man, was it fun!

I was flying through slush, ice and snow like it wasn’t even there. Snow was spraying in every direction at once but the Evolve GTX didn’t even notice. I was surprised by how well I kept traction, only eventually spinning out on an icy wooden boardwalk. Again, you shouldn’t ride like this because it’s not safe, but I was alone, not on public roads and prepared to bail at the first sign of trouble. And of course I was wearing a helmet. But with the exception of that one spot, my feet stayed just as glued to the board as the all-terrain tires did to the ground.

Watch the short video below to get a sense of what I’m talking about.

Street vs off-roading on the Evolve GTX all terrain

Off-roading is definitely what this board was designed to handle and is probably the most enjoyable way to use it. But what surprised me even more was how great it works on the street.

With what Evolve calls Super Carve trucks (essentially double kingpins) you get a comically tight turning radius that allows you to turn this big board on a dime. That makes it great for going around 90 degree sidewalk turns and even pulling U-ies or tight figure 8’s. 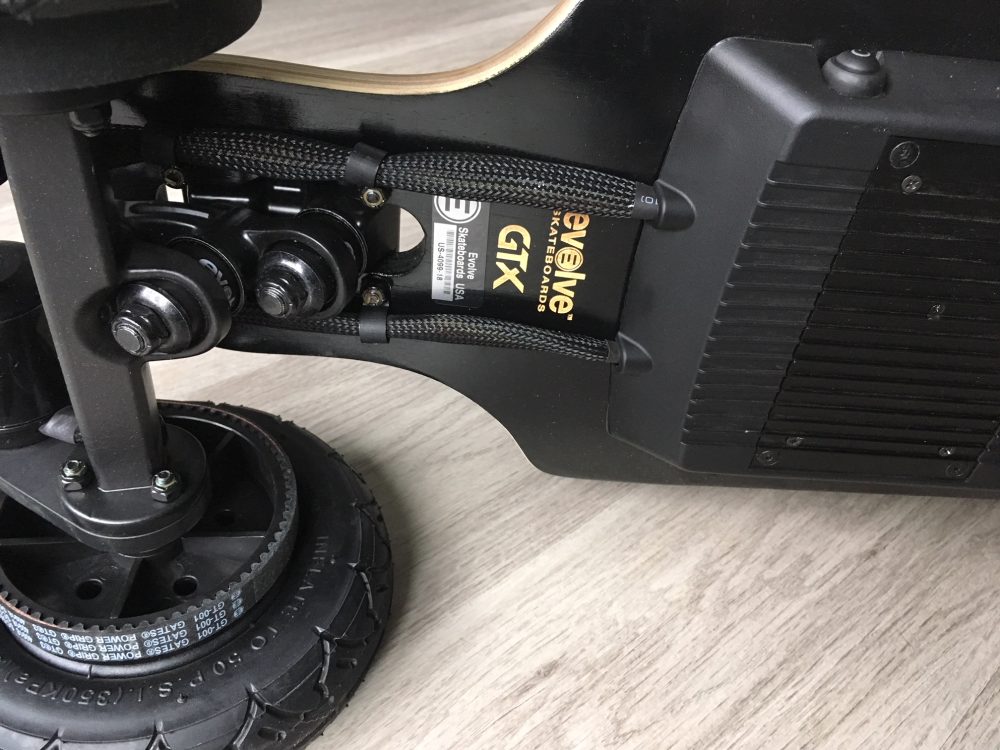 And with the 6.5″ all-terrain tires, you never have to worry about a sidewalk crack or pothole swallowing your board and tossing you to the ground. Just as I tried to hit every obstacle while doing my off-road testing, you better believe I aimed for every pothole, sidewalk crack, subway grate and manhole cover I passed. I even rode off curbs and still managed to hang on. And that wasn’t due to my riding skills, which are certainly below average. The board is just so good at absorbing uneven terrain that you glide right over bumps and voids.

I wish I had the Evolve GTX all terrain board back when I was in college, because this is absolutely how I would have gotten to class everyday.

I was planning to say that this might not be the best beginner board, but my 62-year-old father shut me up on that one. I brought the board home with me to play with over Thanksgiving and he wanted to give it a try. I put it in the second power level to keep him from nearly losing it like I did, and after about 10 minutes of playing around with it he was riding loops around the neighborhood. So I guess this could actually serve as a better beginner board than I thought! Plus, considering the crazy power level it can reach, the board can grow with you as you become more confident and gain riding skills.

Simply put, the Evolve GTX is a well-made machine. It is equal parts off-road thrill ride and effective city commuter. The build quality is impressive and the ride is even more comfortable than you’d believe.

But those features, power, speed and ride-ability don’t come cheap. The Evolve GTX will set you back $1,779. That’s pretty pricy when it comes to electric skateboards. If this is your main commuter though or if you just want a top-of-the-line all-terrain electric skateboard, then the price is quite fair for the quality and specs.

What do you think of the Evolve Bamboo GTX all-terrain electric longboard? Let us know in the comments below.