A new Porsche electric car prototype has achieved a new record charge rate of 400 kW at a new upgraded ‘ultra-high-power’ station as part of the “FastCharge” consortium.

We reported on the project last year when BMW announced that it is leading the ‘FastCharge’ consortium in partnership with other companies, like Porsche, Allego, Siemens and others.

The German Federal Ministry of Transport and Digital Infrastructure supports the project with a € 7.8 million grant, which is interestingly supervised by the National Hydrogen and Fuel Cell Technology Organization (NOW).

At the time, they said that the bulk of their research will focus on improving charging rates using the existing Combined Charging System (CCS), but at a voltage of 900 volts and an amplitude of 500 amperes for a charge rate of 450 kW.

Porsche is already pioneering a 350 kW charge rate that will be first available in the Taycan next year, but they announced today that they achieved a 400 kW charge on a test vehicle at the FastCharge’s test charging station with an output of up to 450 kW yesterday in Jettingen-Scheppach, located near the A8 motorway between Ulm and Augsburg.

BMW also brought an i3 to the charging station, but it wasn’t able to take that charge rate. They used it to demonstrate how the station can switch to 400v charging.

The BMW i3 test vehicle, which was apparently equipped with a 57 kWh battery pack, achieved a 10-80 % SOC in only 15 minutes. 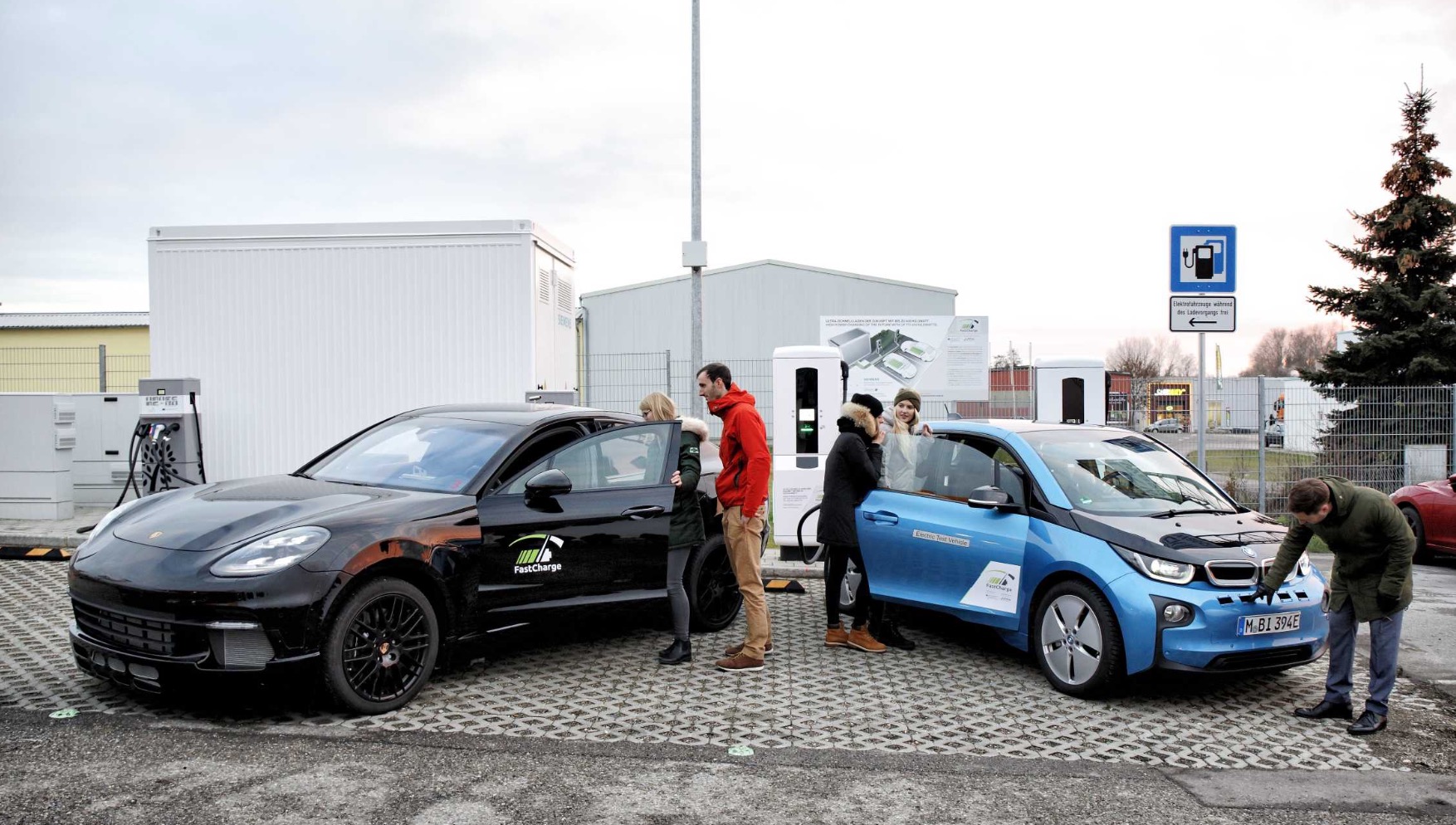 Porsche wrote about the test FastCharge charging station in a new press release:

“The charging station prototypes presented use the charging plug from the tried-and-tested Combined Charging System (CCS) in the Type 2 variant that is standard for Europe. This charging standard has already proven itself in a wide range of electrified vehicles and is used in many parts of the world. The two Jettinger charging stations are currently available for use with all CCS-enabled vehicles, free of charge. Depending on the model of vehicle, the new ultra-fast charging station can be used for vehicles with 400-volt and those with 800-volt battery systems. In each case the charging capacity provided automatically adjusts to the vehicle’s maximum permitted charging capacity”

They didn’t reveal much about the “Porsche research vehicle” that they used to achieve the 400 kW charge rate, but they confirmed that it was equipped with a 90 kWh battery pack and it was able to add about 100 km of range in just 3 minutes.

The company wrote that “an innovative cooling system makes this possible, by ensuring even, gentle temperature control in the battery cells.”

That’s truly impressive. When I tested the Audi e-tron last week, the vehicle achieved a charge rate of 136 kW and that’s the highest charge rate I had ever seen on a production passenger EV.

The fact that we could more than double that capacity in just a few years would represent some incredible progress.

But the fact that it was achieved in testing doesn’t mean that we will see this in production vehicles right away.

Achieving the charge rate is one thing, but we need to see how repeated use can affect the longevity of the battery pack and all other components involved.

Nonetheless, it’s awesome to see some progress on that front.