Tesla hired Bert Bruggeman, an experienced manufacturing executive from the semiconductor industry, as their new ‘Vice-President of Production at Fremont plant’, but the company wouldn’t elaborate further on his role.

Bruggeman made a name of himself in the semiconductor industry at Cypress Semiconductor where he worked for almost a decade and he led wafer operations.

When Cypress spun out SVTC, as a semiconductor technology services company, Bruggeman ended up leading the operations and later became CEO after a stint at SunEdison as VP of Solar Wafering Manufacturing.

Over the last few years, he transitioned to consulting with his own firm GEFIRA Solutions.

Last week, Electrek spotted that he updated his LinkedIn profile to list his new position as ‘Vice-President of Production at Fremont plant’: 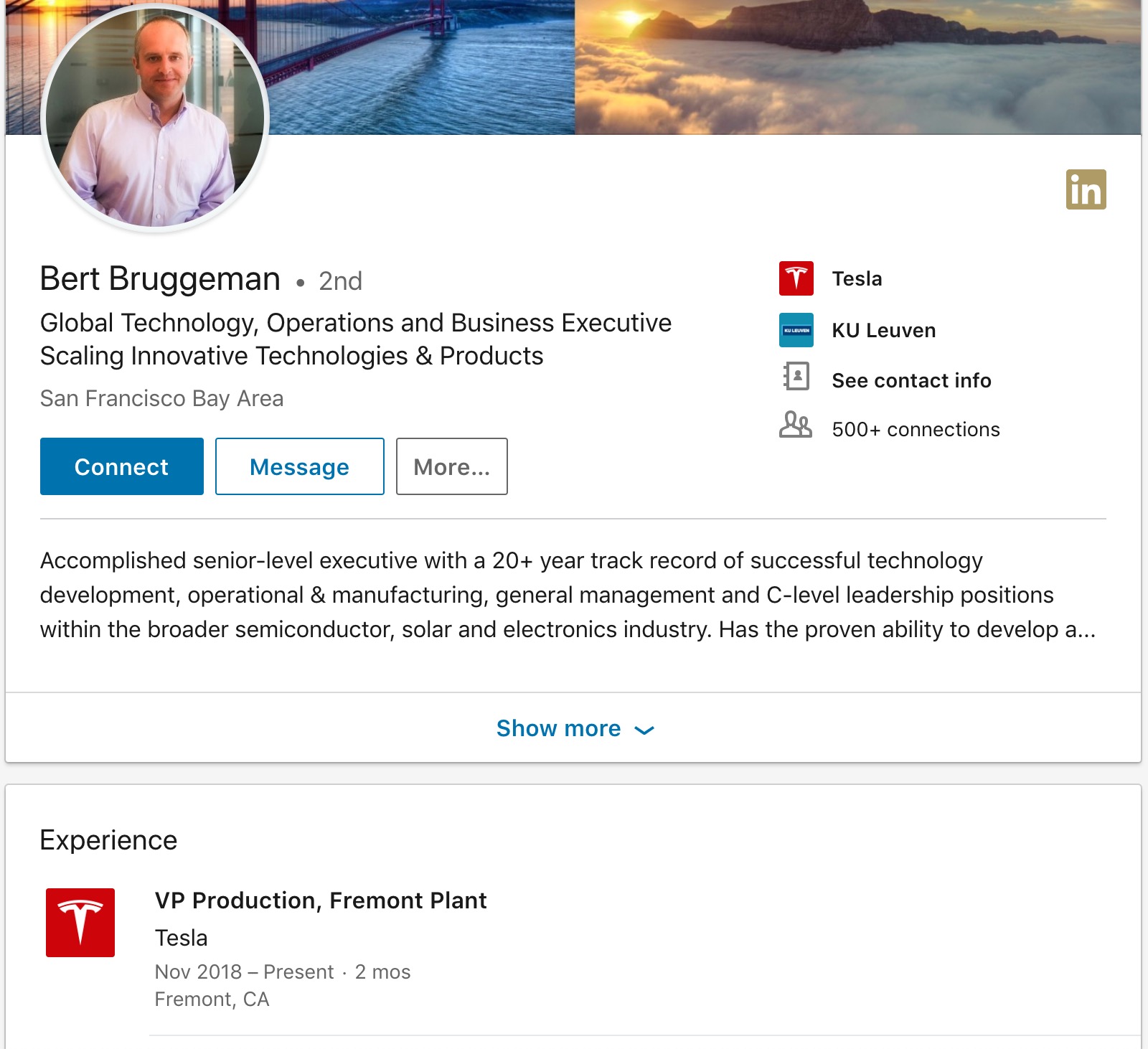 Electrek contacted Tesla about the new hire and while the company confirmed that Bruggeman has joined the company, they declined elaborate on his role (as is typical).

The company also confirmed that Peter Hochholdinger, the VP of Production at Tesla Fremont factory, is still with Tesla.

It’s weird that Tesla doesn’t want to explain Bruggeman’s role ‘Vice-President of Production at Fremont plant’, which sounds like an important position.

At first, I thought it sounded like a replacement for Hochholdinger, but that’s clearly not the case.

Since Tesla doesn’t want to elaborate, we are going to have to speculate.

Maybe we are not talking about Tesla’s Fremont car factory? Tesla did inherit a small pilot factory for solar panels in Fremont from its acquisition of SolarCity.

Considering Bruggeman has experience in solar cell manufacturing, he might be taking that over.

Also, he has a lot of experience in the manufacturing of semiconductor and Tesla is eyeing that business since it designed its own AI chip, which it claims will power the ‘world’s most advanced computer for autonomous driving’ with Autopilot 3.0 update coming next year.

Bruggeman could potentially lead a production effort on that front.

Or he might just have a new leadership role at Tesla’s Fremont factory.

What do you think? Let us know in the comment section below and if you happen to know more about the situation, you can reach out to me via wickr: fredev, Twitter: @FredericLambert, or email: fred@9to5mac.com.