As it is finally launching new features under its ‘Enhanced Autopilot’ package, Tesla is increasing the price of the package when ordered after delivery – creating a $2,000 incentive for buyers to order it with their vehicle.

There have been several changes to Tesla’s Autopilot options lately.

First off, Tesla did increase the price of the ‘Full Self-Driving Capability’ package when ordered after delivery.

In order to get the package, buyers need to have the ‘Enhanced Autopilot’ package, which used to cost $5,000 when ordering the vehicle and $6,000 if buying later on through an over-the-air update.

Once you have this package, the ‘Full Self-Driving Capability’ used to cost $3,000 when ordering and $4,000 when buying over-the-air later.

In June, Tesla increased the price of the package when bought through an over-the-air update after delivery to $5,000.

Tesla told Electrek that they will honor the original price for existing owners who didn’t buy the package thinking that they could later upgrade over-the-air for $4,000.

Last month, Tesla ended up removing ‘Full Self-Driving Capability’ package from its options due to ‘confusion’. It can now only be ordered after delivery for existing owners and should come back as an option to new buyers once it actually starts to roll out the capabilities.

Now Tesla is also increasing the price of the ‘Enhanced Autopilot’ package when bought after delivery as an over-the-air update. 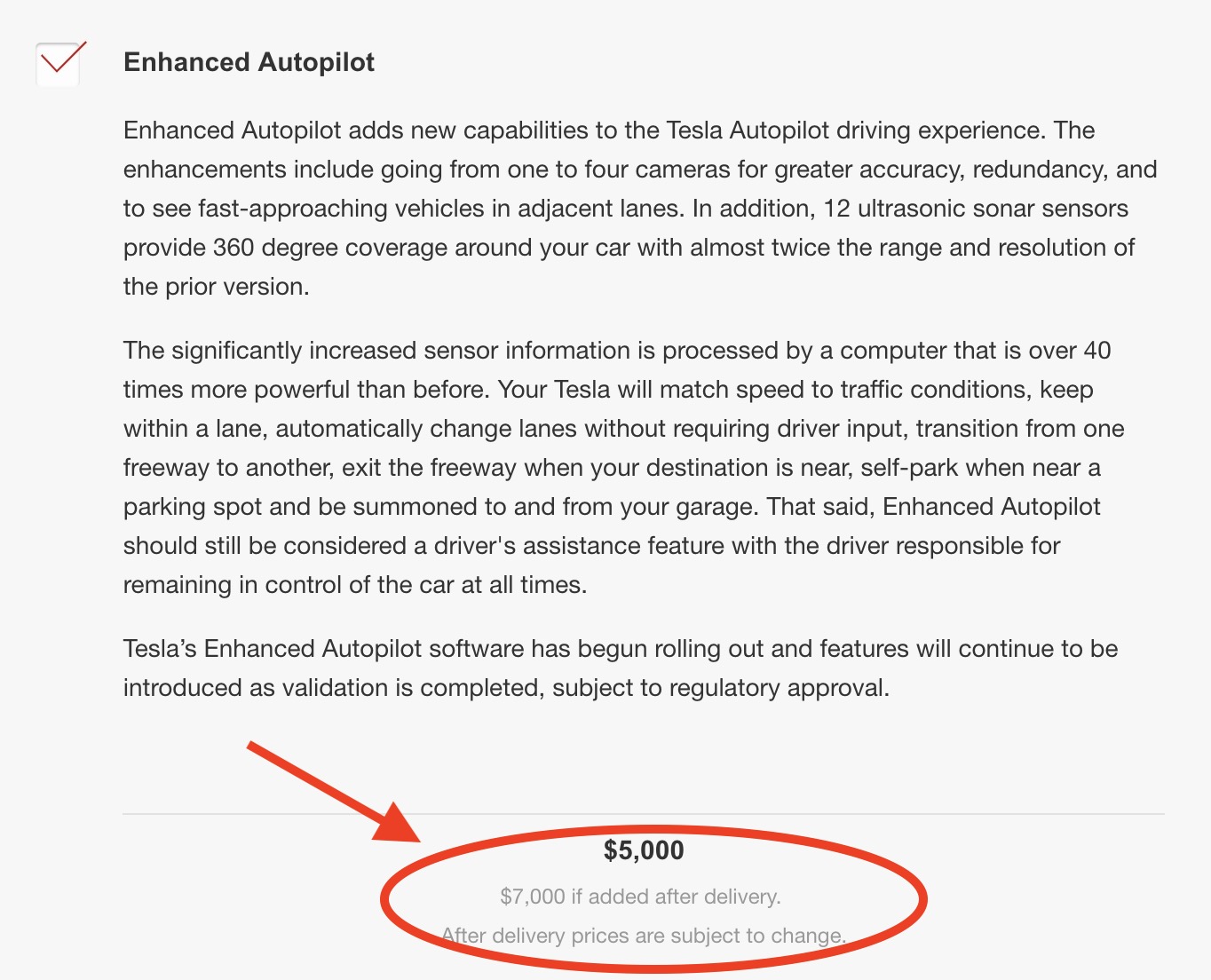 Tesla also seems to have added a warning that the price after delivery is subject to change meaning that they might not honor the price if you decide to wait.

It comes after Tesla finally started releasing the promised Autopilot features under the package, like Navigate on Autopilot, two years after starting to sell it.

Many people don’t buy the feature at delivery thinking that they could buy it later after the capabilities improve with over-the-air software updates.

Doing that came with a $1,000 premium before, but now Tesla is doubling that premium and warning of possible further increases in what appears to be an incentive to order the package before delivery.

For existing owners, the price should still be $6,000 since many of them didn’t buy it thinking that they could do it later for $6,000 when Tesla actually delivers the features it’s promising under Enhanced Autopilot.

Tesla said it would honor the price when it did the same thing with ‘Full Self-Driving Capability’ package, but it never corrected in the ‘Tesla Account’ of many existing owners and some reported having a lot of issues actually getting the price.

I would expect similar issues in this case.

Otherwise, I think this is clearly Tesla trying to push people to buy the package before delivery.

With the latest improvements and what I expect is coming in the next few months thanks to the new neural net capabilities, I think it’s starting to be a good value option.