Ever since launching its second generation Autopilot hardware suite in all its vehicles in 2016, Tesla has been pre-selling a ‘Full Self-Driving Capability’ package to eventually make Tesla’s vehicles fully autonomous.

If customers order a vehicle without the package, they can still order it through an over-the-air software update later on, but it came with a $1,000 premium.

Tesla has now increased that premium by another $1,000.

In order to get the package, buyers need to have the ‘Enhanced Autopilot’ package, which costs $5,000 when ordering the vehicle and $6,000 if buying later on through an over-the-air update.

Once you have this package, the ‘Full Self-Driving Capability’ costs $3,000 when ordering and it used to cost $4,000 when buying over-the-air later.

Now Tesla appears to have increased the price of the package when bought through an over-the-air update after delivery.

The online design studio for the Model S and Model X now lists the upgrade at $5,000: 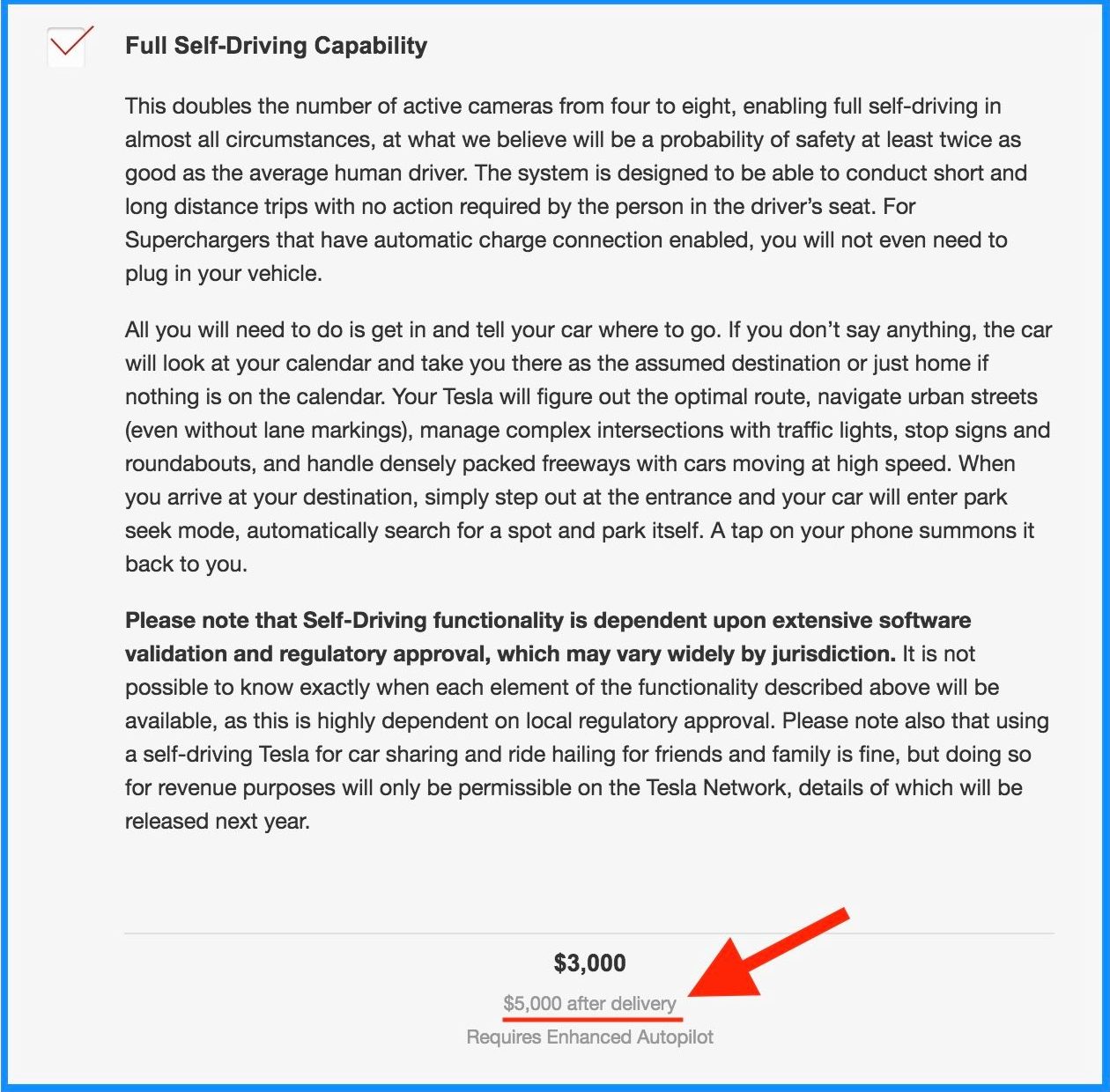 To this day, there is still no difference between the package described above and Tesla’s Enhanced Autopilot package.

Current owners of Model S and Model X with Autopilot 2.0 have reported to Electrek that they are now also seeing the price of the upgrade increase.

We contacted Tesla to get an explanation about the situation and the company confirmed that it isn’t supposed to apply to existing vehicles and they will honor the original $4,000 price. The new $5,000 price is for new orders.

Tesla CEO Elon Musk recently said that the first new features under the ‘Full Self-Driving Capability’ package should be released with Tesla’s version 9 software update, which is expected to be released this summer.

I can understand the price increase for new orders as Tesla is definitely finding it way more difficult than anticipated to develop the feature, but I don’t think it’s fair for existing owners to also have the price increased.

Buyers might have ordered the car thinking that if or when Tesla finally releases features under ‘Full Self-Driving Capability’, they would just pay the $1,000 instead of loaning Tesla $3,000 for who knows how long.

At this point, it might have proved smart for early Autopilot 2.0 adopters since Tesla has yet to release any FSD features.

Fortunately, Tesla seems to be correcting the situation as we are reporting this.

The timing of it also feels a little suspicious since Tesla is apparently preparing to soon release the first FSD features in the coming months just as it increases the price of the over-the-air update.