Watch a Tesla drive in Paris through the eyes of Autopilot 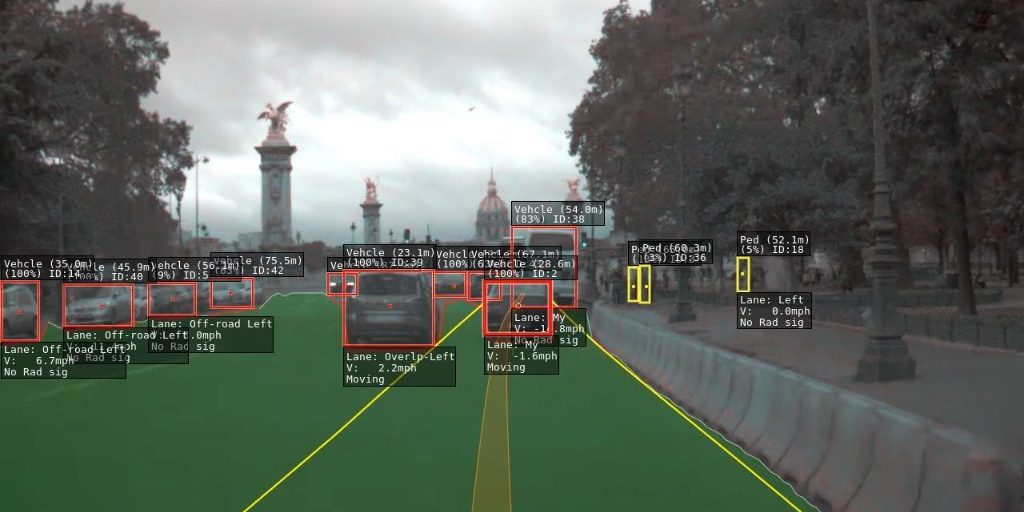 Tesla’s approach to autonomous driving is rather simple – albeit hard. It has some radar and ultrasonic sensor technology but the goal is to drive based on computer vision with cameras feeding into a neural net system that it is able to recognize what it sees – much like a human.

We are now getting our best look yet at what Autopilot can see with a drive through Paris.

Earlier this summer, we already had a rare look at what Tesla Autopilot can see and interpret from our favorite Tesla hacker ‘verygreen’ and the help of TMC user DamianXVI.

They have now teamed up again for an even better look at what Autopilot can see after they bought an Autopilot Hardware 2.5 computer on Ebay that just happened to be a fully unlocked developer version.

It enabled them learn more about how Tesla’s Autopilot works, but the duo still emphasized that their visualization is not perfect and it only includes what they understand of what Autopilot is seeing:

Green started a thread on the Tesla subreddit about their latest project and wrote:

“So keep in mind our visualizations are not what Tesla devs see out of their car footage and we do not fully understand all the values either (though we have decent visibility into the system now as you can see). Since we don’t know anybody inside Tesla development, we don’t even know what sort of visual output their tools have.”

He describes how the data is visualized in the video below:

“The green fill at the bottom represents “possible driving space”, lines denote various detected lane and road boundaries (colors represent different types, actual meaning is unknown for now). Various objects detected are enumerated by type and have coordinates in 3D space and depth information (also 2D bounding box, but we have not identified enough data for a 3D one), correlated radar data (if present) and various other properties.”

Here’s the video of a Tesla being driven (by a human) in Paris and what Autopilot sees during that drive based on Green and Damian’s research (the vehicle is using the firmware version 18.34):

Green noted a few interesting events from the perspective of what Autopilot can see to look at during the video:

They also produced a similar video but for highway driving, which is still the main intended use of the driver assist system under the current software:

A few other highlighted points by Green:

So they removed those images in another video to truly show us what Autopilot can see:

As previously mentioned, it’s not a perfect a look, but it’s the best we have now.

For those unimpressed by the system, Green pointed out that this is truly the first third-party verification of an autonomous driving/driver assist system aside maybe from Comma.ai, who open-sourced its software.

Companies like Waymo and Cruise Automation have released similar videos, but they are curated, like Tesla’s own similar video for the launch of Autopilot 2.0, which we know now didn’t mean much about the capabilities.

Hopefully, Tesla and those other companies become more open about the development of their autonomous driving systems.

I think it would go a long way in making people better understand the systems and their limitations. Eventually, as they get better, it will also lead to people trusting the system when it can actually be trusted.