A Tesla Semi prototype has been driving around the country to apparently visit companies who have reserved the electric truck and as part of its test program.

Now the prototype has been spotted in Salt Lake City.

Last week, we reported that the Tesla Semi prototype was now in Des Moines, Iowa – more than 300 miles from UPS.

Later, the electric truck prototype traveled another 580 miles or so and stopped at Tesla’s Supercharger station in Brush, Colorado.

Now the truck has made it another 500+ miles to Salt Lake City, Utah.

Tesla employees shared images on social media of the vehicle arriving at the local service center earlier today. The Tesla Semi quickly attracted a crowd (pictures via kiracares on Instagram): 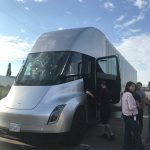 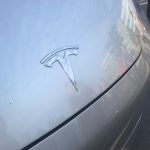 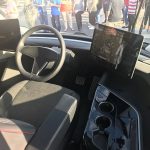 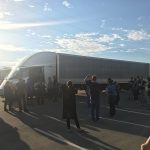 From its last stop in Colorado, we learned that this prototype is configured with a range of 300 miles on a single charge.

But Tesla CEO Elon Musk said that he expects that the production version could be even more efficient with a range closer to 600 miles.

Last month, Musk said that the Tesla Semi made it ‘across the country alone’ with only the Supercharger network and an extension cord.

It appears that the vehicle toured the midwest and it is now making its way back to California – having likely traveled well over 3,000 miles on the trip.

The trip is one of the very first examples of an electric semi truck being able to cover long distances – though it’s unclear how much cargo it was carrying, if any.

Musk said that Tesla is now completing the production design of the truck and working to bring to production next year.