Remember when you were a kid on those hot summer days and suddenly the jingle from an ice cream truck came winding around the corner? There were very few things more exciting than that surprise ice cream truck rolling down the block, chased by a pack of eager kids.

Now those kids are all grown up and some of them have realized that they could do the same thing, minus the truck. As it turns out, an electric bicycle works even better and can be much more profitable with a smaller startup cost. A growing number of inspiring entrepreneurs are now opening micro-businesses (small one or two-person commercial operations) based on electric cargo bicycles.

I was able to catch up with Manuel Kretzschmar recently to discuss his electric cargo bicycle that he converted into an ice cream truck, or more accurately, an ice cream bike.

When he was considering the concept of opening up an ice cream vending micro-business, his research led him to some fascinating conclusions.

He realized that turning an electric cargo bicycle into an ice cream vending vehicle would not only be more energy-efficient, but could also help him reach profitability much faster due to the lower startup costs.

Compared to an ice cream e-bike, an ice cream truck would cost 10 times as much to set up and would use 100 times more energy each the day – a critical cost for a new business. Energy costs for the e-bike with freezer would be around $0.35 per day, versus $35 per day for an ice cream truck.

Plus, with Manuel’s experience working at Glow Worm Bicycle, a shop in Sydney that sells cargo bikes and e-bikes, he was already familiar with the e-bike side of things.

Inspired by a similar Bullitt cargo bike with a solar-powered fridge operated by fellow Sydney resident Rob Mueck, Manuel made his own electric version using a Radkutsche Rapid cargo e-bike and a 12V freezer unit.

The cargo-ebike uses a 1.5 kWh battery made up of 140 smaller 18650 battery cells, which is around 3 times larger than most standard consumer electric bicycle batteries. Or as Manuel put it:

This is equivalent to 2% of the batteries required to build a Tesla Model S electric car. 1,500 Wh is roughly equivalent to 1,300 Calories of food energy.

With that much capacity, Manuel’s e-bike can run all day, even using the battery to power both the bike and the freezer. When he wants even more range, he installs a fairly compact 85 W solar panel as well. However Manuel says that is mostly for solar awareness, since the battery is already large enough for everything he needs. 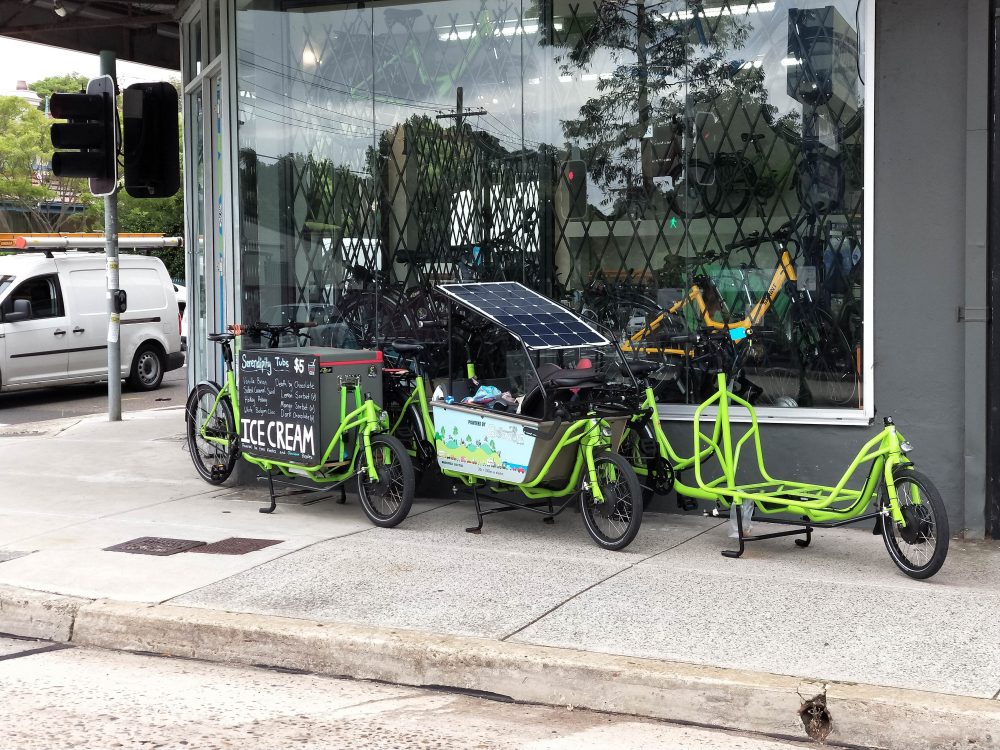 On the business side of things, Manuel has found two operating methods that work well: either selling ice cream conventionally to individuals, or working with local event planners to pre-sell ice cream to the hosts and then distribute it for free to attendees as an attraction.

Most councils are looking for ways to incorporate sustainable businesses into their program so we’ve done quite a few ice cream giveaways where they purchase a set quantity and we hand them out while also demonstrating e-bikes.

When selling to individuals, it turns out that the novelty of an ice-cream bike actually helps to draw even more customers.

Sometimes people will just see you riding past and call out. If you’re in a large park with lots of small groups it’s usually just a matter of approaching a few until somebody gets the ball rolling. When that happens it’s all on, people start asking questions about the bike and seeing others take part inspires new customers. 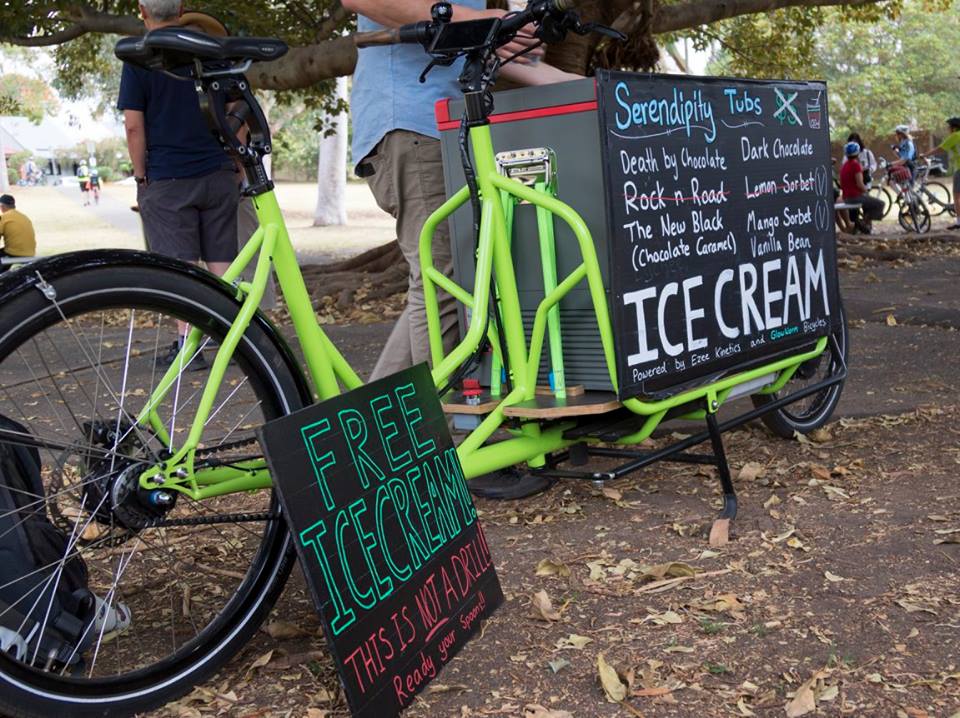 The business can be quite profitable, with a full freezer of 240 ice cream tubs clearing about $1,200 per load. Not too shabby.

Others are quickly catching onto the profitability and convenience of e-bike based micro-businesses. Companies like Bizz On Wheels already offer e-bike powered food carts and ice cream e-bikes. Other companies provide similar platforms and offer other commercial options like pedicabs, mobile advertising and other vending options. 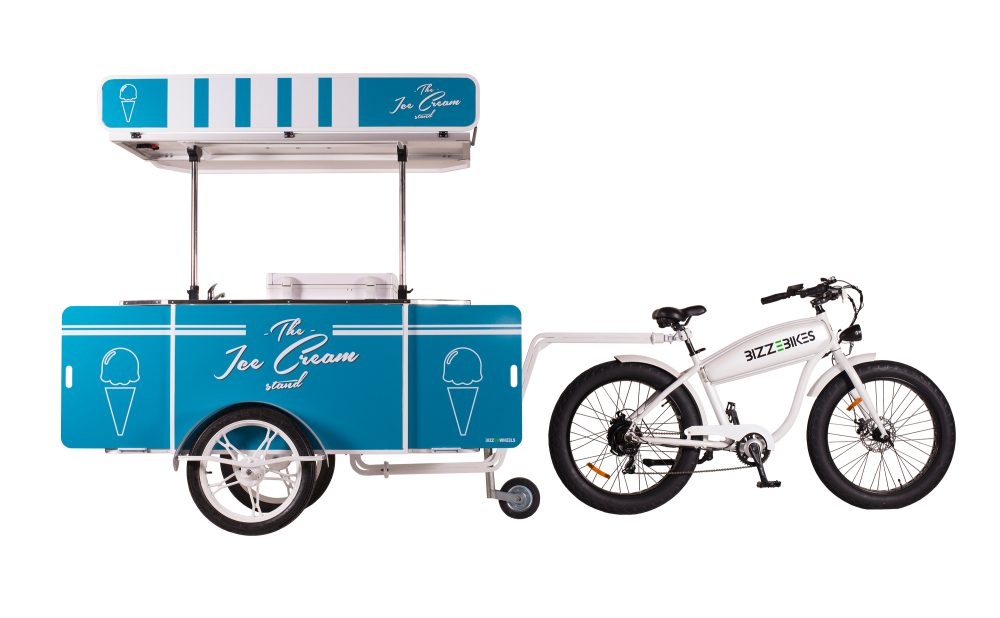 Manuel says that he’d be interested in expanding into more ideas for cargo e-bike businesses or even expanding his operation into a fleet. He has found that other vending options like beer are highly demanded, and warm food or drinks in the winter could also be a good option.

For now though, he is still more interested in the awareness aspect and getting more people on e-bikes of any shape or form. To that end, he often uses his ice cream e-bike to draw in potential test riders at his Glow Worm bicycle shop, offering free ice cream in exchange for test rides. Yep, you heard that right – you get to test ride an e-bike and get a free ice cream. Sounds like a good deal to me.

I feel like this is a no brainer for a lot of aspiring young entrepreneurs that want to get experience with running their own business, but can measure their startup capital in the thousands of dollars, not the tens or hundreds of thousands.

Obviously the success of electric bicycle-based vending services is largely dependent on location and requires an area with crowds to be profitable, but this still sounds like it would work in many cities around the world.

Additionally, it would be quite easy to develop everything you need yourself. We’ve already talked about how cheap and easy it is to build a DIY electric bicycle. Taking it a step farther, you could add a bicycle trailer, or you’d just swap the base bike for a cargo bicycle, then add a 12V electric freezer. If you are worried about battery life, you could add a simple solar panel to keep your freezer running all day.

Or you could just start with an electric cargo bike such as the Radkutsche Rapid that Manuel used, or the RadBurro by Rad Power Bikes, then add your accessories.

The trickiest part could be local regulations. According to Manuel, electric bicycle-based vending businesses usually do not fall under the same regulations for food trucks and street carts, especially when selling pre-packaged food like tubs of ice cream. So in many areas they are unregulated, sometimes putting them in a grey area of being both not illegal but also not explicitly legal to operate in public areas either. So you’ll have to check your local laws.

For that reason, Manuel says he mostly prefers pre-selling ice cream to event planners so he can give it away for free as an attraction at events and festivals. That way you get paid up front and can better enjoy the process, talking up attendees and spreading the e-bike gospel.