Tesla’s new Autopilot hardware upgrade will be free for owners with the $3,000 to $5,000 ‘Full Self-Driving’ package

After announcing an upcoming new Autopilot 3.0 hardware upgrade last week, Elon Musk now updates us on the timing and confirms who is going to get the upgrade for “free” – or more accurately, included with an existing Autopilot package.

During its second quarter conference call last week, Tesla claimed that it now has the ‘world’s most advanced computer for autonomous driving’ and that it will be released in an Autopilot 3.0 upgrade coming “next year”.

It consists of a new computer based on a chip developed in-house by Tesla especially to run a computer vision neural network, which Tesla has been using to power the latest generation of the Autopilot.

The company claims that this new chip increases the processing capacity by an order of magnitude and will enable Tesla to bring fully self-driving capability to its vehicles, which Tesla has been advertising as being compatible with its vehicles since October 2016 when they introduced the Autopilot 2.0. suite

Today, Musk shared a chart by Lex Fridman, an MIT researcher who has been tracking a lot of Tesla Autopilot-related data, that shows the vehicles delivered by Tesla with different generations of Autopilot hardware: 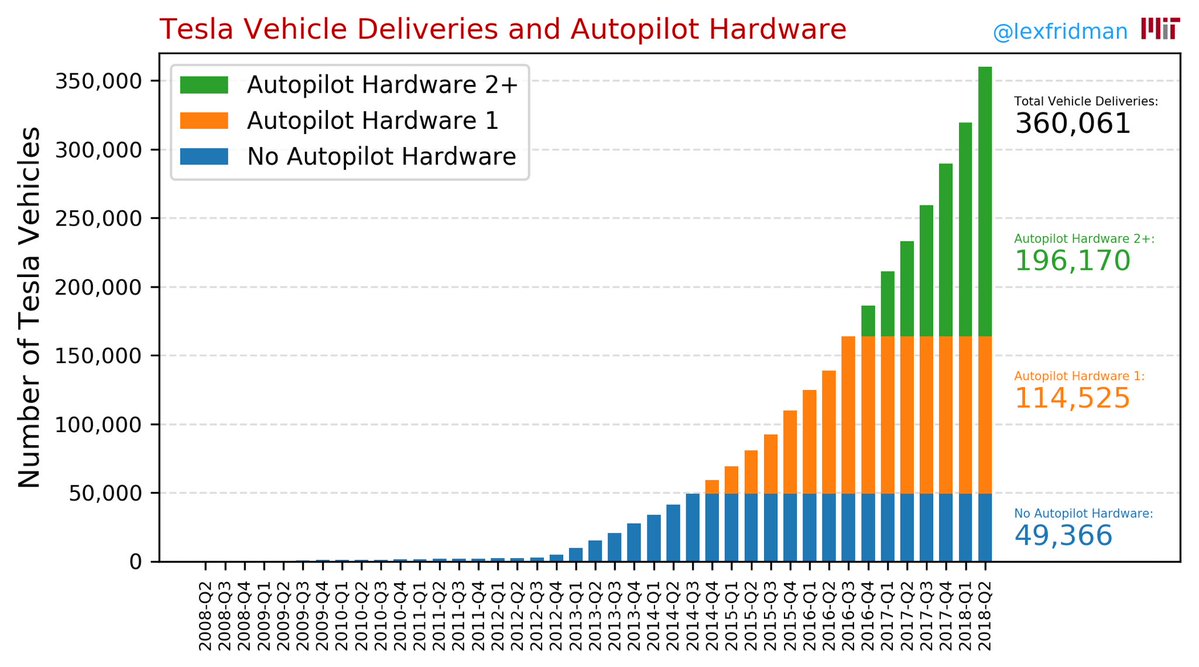 It led me to ask Musk about a more precise timing for the release of the third generation hardware and details about the rollout.

Probably 4 to 6 months. Those who order full self-driving get the upgrade at no cost. It isn’t needed just for enhanced Autopilot.

That’s a much-appreciated clarification that wasn’t made after Tesla announced the new hardware last week.

Basically, Musk is saying that Tesla can deliver the promised features under the ‘Enhanced Autopilot’ package with the current computer power inside vehicles with Autopilot 2.0+ hardware.

The new computer will enable the features promised in the ‘Full Self-Driving’ package, which of course includes the capacity for the vehicle to drive itself.

It means that those who bought the package will receive the computer upgrade for free and those who haven’t will need to buy the package through an over-the-air update.

In order to get the package, buyers need to have the ‘Enhanced Autopilot’ package, which costs $5,000 when ordering the vehicle and $6,000 if buying later on through an over-the-air update.

Once you have this package, the ‘Full Self-Driving Capability’ costs $3,000 when ordering and it used to cost $4,000 when buying over-the-air later.

In June, Tesla increased the price of the package when bought through an over-the-air update after delivery to $5,000.

Tesla told Electrek that they will honor the original price for existing owners who didn’t buy the package thinking that they could later upgrade over-the-air for $4,000.

With Musk’s comment today, it looks like those owners who don’t have ‘Full Self-Driving’ package right now will be able to upgrade for $4,000 and get the new computer when it becomes available.

That makes sense and it is something many Electrek readers pointed to as a likely possibility in our last article about the changes.

The need to have the ‘Full Self-Driving Capability’ package, which Tesla has now been selling for $3,000 to $5,000, to get the upgrade will enable Tesla to recuperate some of the cost to retrofit what will likely end up being over 300,000 vehicles by the time the new computer goes into production.

It also makes it more attractive for new Model 3, Model S and Model X buyers right now to order the car with ‘Full Self-Driving Capability’ package since it will enable them to get the upgrade for $2,000 cheaper.

Of course, that is if you want fully autonomous driving capability and you believe Tesla can deliver on the promise with the upcoming new hardware.

This is certainly a strange situation in the auto industry since it involves hardware retrofits, over-the-air software updates and option packages, as well as autonomous driving capability.