The Tesla Solar Roof and Powerwall in one chart

Tesla’s rollout of the solar roof tiles is much slower than anticipated, but the few customers who have Tesla solar roof installations seem pretty happy about it.

One of the very first homeowners to get a solar roof shared an impressive chart showing how the system is “performing well.”

Prior to that, we had seen Tesla starting to install more solar roof systems, but we were told that it was still only for employees at that time – including installations at the homes of CEO Elon Musk and CTO JB Straubel.

One of the first completed customer installations was reportedly at the San Jose home of someone going by @toblerhaus on Twitter back in March.

The homeowner has been documenting how the system has been performing and now that it is summer, a great time for solar (also pretty good all year around in San Jose), she shared the impressive performance:

We are looking at Tesla’s energy usage widget on the mobile app for Powerwall and solar customers. It includes an impressive chart showing the energy consumption of the house (blue), the energy production of the solar roof (yellow), the input and output of the Powerwall (green), and the energy coming from and going to the grid: 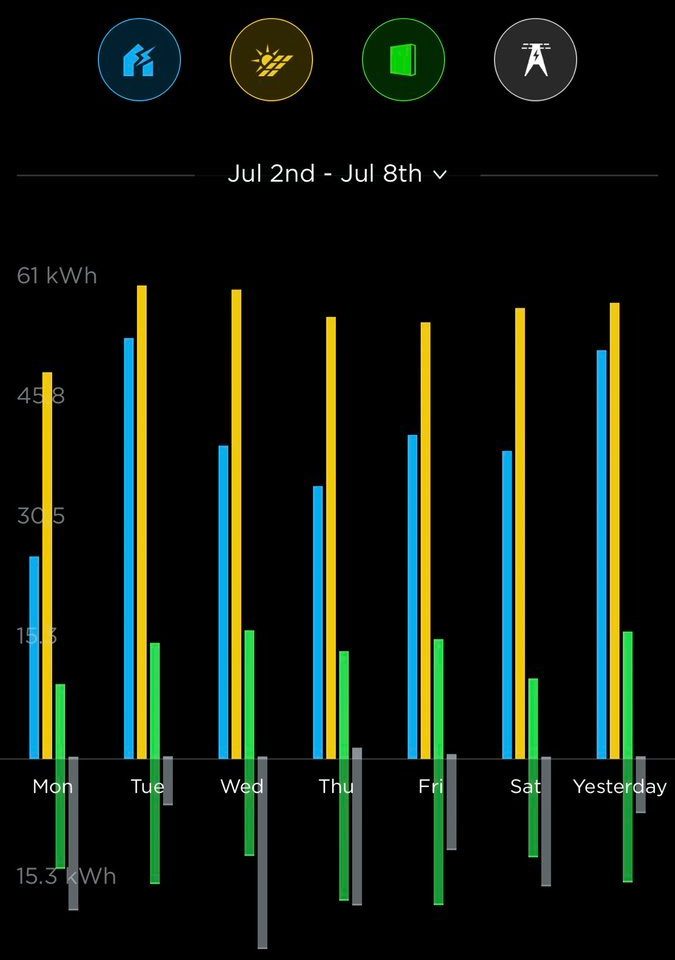 It’s quite impressive because as you can see, the household is barely consuming any energy from the grid and it is instead sending back a lot of its own production to the grid.

Over the last week, the house ended up consuming 285 kWh and only 2.9 kWh came from the grid. The rest came from the solar roof tiles, which produced 394 kWh during the period.

Some of the power came directly from the solar installation and the rest went to the Powerwall or to the grid when there was excess.

With the Powerwall, they were able to use 95.2 kWh of their own energy production during the week, which helped limit the energy consumption from the gird to less than 3 kWh.

The homeowner said that they used to pay PG&E $250-300 on average per month. They have since added another electric vehicle to their load and now they end up getting paid by PG&E for their solar power.

She added that the entire system ended up costing them “about $55,000” after the federal tax credit.

Tesla says that the “typical homeowner can expect to pay $21.85 per square foot for a Solar Roof.”

To be clear, the price is not comparable to an asphalt or concrete roof but to high-end roofing options similar in style as Tesla’s solar roof tiles.