As we reported last week, Tesla started rolling out a new speed-limiter feature in its latest vehicle software update.

We now learn that Tesla is actually dedicating the feature to the son of a Tesla owner who died in a Model S crash due to what the police believe may have been excessive speed.

Tesla owners with vehicle software version “2018.24 or above” and the latest mobile app update (Version 3.4.1) can now access a new speed limiter feature.

The automaker describes the feature in the update:

When Tesla launched the feature, we speculated that it might be aimed at parents who let their kids drive their Tesla vehicles, which are considered quite powerful vehicles to be used as first cars by teenagers.

Now we learn that it’s likely what Tesla had in mind since they dedicated the new feature to Barrett Riley in the release notes: 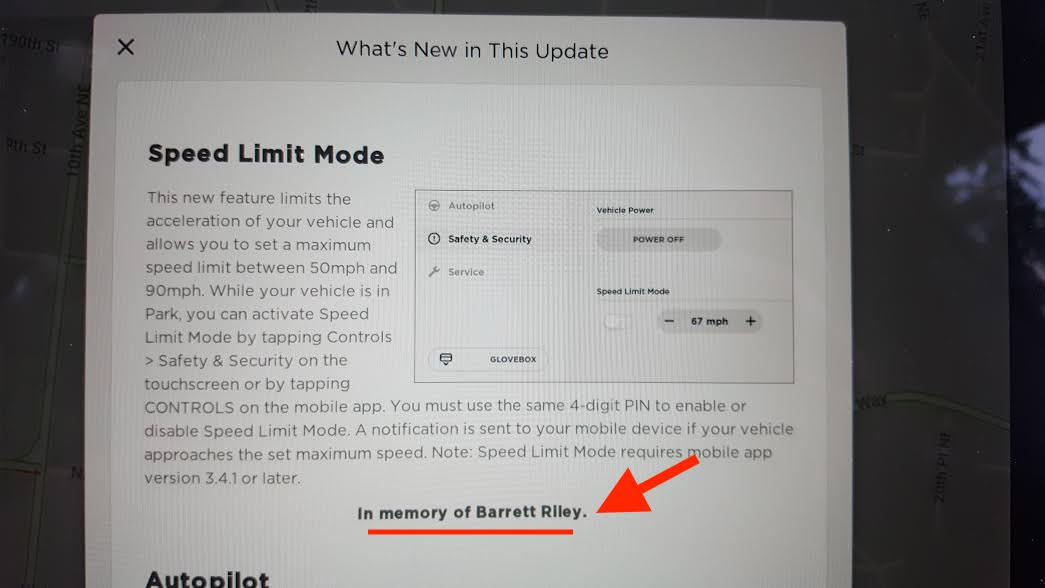 Riley died last month after he crashed the Model S that his father bought him into a wall before the vehicle burst into flames. One of his two passengers, Edgar Monserratt Martinez, 18, also lost his life in the crash.

The police determined that excessive speed was likely a factor in the accident, which happened in a 30 mph zone.

As most accident involving Tesla vehicles, it made the national news.

In the scrutiny that followed the accident, we learned that Riley received a speeding ticket for driving at 112 mph just a few months before the accident.

James Riley, Barrett’s father, bought a Tesla for his son because of the vehicle being known for its level of safety, said his aunt Pat Riley (via Sun Sentinel):

“My brother bought the car for my nephew because he wanted Barrett to be safe. He thought other cars were riskier because the gas could cause a fire. How ironic.”

The father was aware of his son’s lead foot and attempted to address the issue following the speeding ticket.

Knowing that Tesla’s loaner cars can’t go over 85 mph, James Riley reached out to Tesla to see if they could limit the top speed of his son’s car, which Tesla did on request.

It looks like it has now inspired Tesla’s latest feature, which enables owners to limit the speed far lower than 85 mph.

It’s incredibly sad that even after being smart enough to think of asking Tesla to limit the speed of the car, his son still died in the tragic accident.

This new speed limiter feature is going to be a fine line to walk because you don’t want your kids to drive at high-speed, but they still need to achieve decent speeds on the highway also for safety reasons.

In this case, it was only a 30 mph zone and the police believe he was driving much faster and therefore, an 85 mph limit couldn’t change much.

Something that would work by limiting the speed to a few mph over the speed limit, like Autopilot does, would be more useful, but it could be an issue if the speed limit isn’t properly registered.